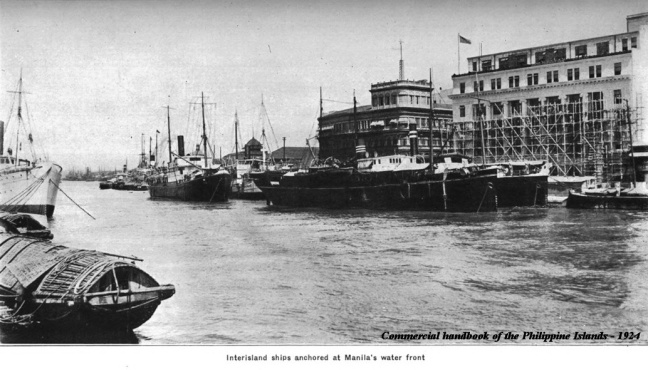 The nearest representation of shipping of about a century ago that I know.

If I would ask the question what was the second-biggest shipbuilding area in the Philippines a century ago, I am almost sure nobody can give the right answer. I think almost all will say that the answer is Cebu. But actually, there was an area that was ahead of Cebu in shipbuilding then and that was Sorsogon and maybe all will wonder how can that be when Sorsogon is no longer heard in shipbuilding today. Now, maybe you are tickled enough already.

I want to give a historical background first. During the Spanish rule when Mexico was not yet independent from Spain, the Spaniards ran a galleon trade between Islas Filipinas and Mexico where goods from China were sent in that country and a portion of that was further sent to Spain. A successful voyage was immensely profitable but many also failed to reach Mexico because the ships were hit by storms or armed vessels of the British caught them. Galleons had to be continually built as most voyages were one-way trips to the misfortune of the indio sailors who were mostly shanghaied.

The biggest galleon-building areas then were in Bicol and Cavite. In Bicol, the Spaniards established ten shipyards, the biggest of which was located in Magallanes, Sorsogon. But actually, the whole of Sorsogon Bay was involved in galleon-building as the activity of the bay is just like one as it was not as diversified as the activity in Manila Bay then. Except that there is a mouth, Sorsogon Bay is just like one shallow saltwater lake.

And besides, early in Spanish rule, Sorsogon Bay played a route in the communications of the Spanish regime. You see, the province of Ibalon then (the combined Albay and Sorsogon of today) connected to Iloilo rather than to Manila because it is easier to connect to that because in the age of sails, the direction of the monsoons has to be respected and so regime ships from Iloilo land in Sorsogon Bay on the way to Castilla, Sorsogon. When the current province of Albay was first explored by the Spaniards in the 16th century, the point of entry was Sorsogon Bay but then they started from Cebu.

To compare, 31 locally-built ships of 44 gross register tons and over were built around Manila Bay (that means Manila, Rizal, Cavite and Bataan) from a century ago and earlier. 44 GRT is about 25 meters in Length and 5.5 meters in Breadth and that was the size that is already of significant size for me then when the ships and the population were still small As a comparison, the smallest of the basic, short-distance ferry-ROROs is about 25 meters in length.

Of that size, 15 were built in Sorsogon Bay, about half of that built in Manila Bay but Sorsogon Bay is not even half of the latter in size, population and importance and it has no industries unlike Manila which is the national capital. Cebu was just in third place with a measly seven ships built and Iloilo was even trailing Cebu as a shipbuilding area. Almost all these ships were wooden-hulled.

Among the 15, the Pilar, R. Melliza and Ventura became liners from Manila with the first and third owned by the Rio y Olabarrieta shipping company which had routes from Manila to Palawan and as far as the town of Balabac at the southern tip of the province. Meanwhile, the R. Melliza of Isidoro Goliman Limquiaco had a route from Manila to Bicol and later to Cebu.

A century ago, the two biggest ship owners then in Cebu that were engaged in regional shipping were the Aboitiz and Escano families and they were precisely those which ordered ships from Sorsogon with Escano being the leader. In all likelihood, those two intertwined families whose fortune was built then in abaca might have discovered the abaca of Sorsogon.

The Victoria and the Ormoc were owned by the Escano family while the Aurora was owned by the Aboitiz family. Meanwhile, three of the ships in the list were owned by the Lizzaraga Hermanos, the biggest regional shipping company in Western Visayas then (it was not yet De la Rama SS). Those were the Cascante, Olite and Pamplona. So it looks like that the acceptance of the Sorsogon-built ships were far and wide and one might have even went to Zamboanga, the Luna.

Now, Sorsogon is no longer heard in shipbuilding and probably the primary reason for that is what is being built now are steel-hulled ships and Sorsogon Bay is not an industrialized area and so the materials needed to build ships like steel and acetylene are not as available there. Plus in the immediate postwar years, electricity is not common and shipbuilding is a big consumer of that.

Whatever, I just want people to know that once and for several centuries Sorsogon was great in shipbuilding.