Tacloban City is the regional commercial center of Eastern Visayas and this has been so for about a century now. It has the advantage of a central location and a sheltered port and bay. Its reach weakens, however, in the western coast of Leyte which has its own sea connections to a greater trade and commercial center, the great city of Cebu which has been ascendant in the south of the Philippines since half a millennium ago.

As a regional commercial center, it is but natural for Tacloban to have a great port with trade routes to many places. That has been the situation of Tacloban since before World War II and even before World War I. It also does not hurt that Tacloban is the capital of the province of Leyte. In fact, because of her superior strategic location, Tacloban even exceeded her mother town which is Palo which is still the seat of the church hierarchy.

Before World War II and after that, passenger-cargo ships from Manila will drop by first in Masbate, Catbalogan and Calbayog before hooking route and proceeding to Tacloban. Some of these ships will then still proceed to Surigao and Butuan or even Cagayan de Oro using the eastern seaboard of Leyte. Tacloban then was the fulcrum of these liner routes going to Eastern Visayas. That route was much stronger than the routes that drop by Ormoc and Maasin and perhaps Sogod and Cabalian before going to Surigao. The two routes were actually competing (like Ormoc and Tacloban are competing). If the route via Tacloban was stronger it is because Tacloban was the trade and commercial center of the region.

There were many liner companies that called over the years in Tacloban from Manila. Among them were Sulpicio Lines (and the earlier Carlos A. Gothong & Co.), Compania Maritima, General Shipping Company, Philippine Steam and Navigation Company, Philippine Pioneer Lines (and later the successor Galaxy Lines), Escano Lines, Sweet Lines, even the combined Carlos A. Gothong Lines Inc. and Lorenzo Shipping Corporation. When it was still sailing local routes, even De la Rama Steamship served Tacloban. Among the minor liner companies, Royal Lines Inc., Veloso Brothers Ltd., N&S Lines, Philippine Sea Transport and Oriental Shipping Agency also served Tacloban. Not all of those served at the same time but that line-up of shipping companies will show how great was Tacloban port then. 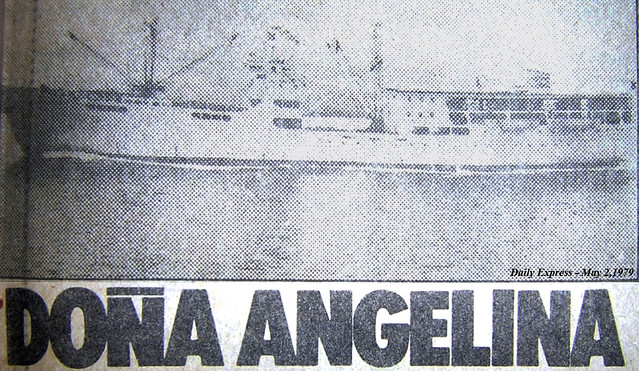 For many years there was even a luxury liner rivalry in Tacloban port. This was the battle which featured the Dona Angelina of Sulpicio Lines and the Sweet Rose of Sweet Lines which mainly happened in the 1970s. Sweet Rose was sailing to Tacloban from the late 1960s and was in fact the first luxury liner to that port. The two liners were the best ships then sailing to Tacloban port. The rest, of course, were mainly ex-”FS” ships which was the backbone of the national liner fleet then and there was no shame in that.

Tacloban port was doing well until the late 1970’s when a paradigm change pulled the rug from under their feet. This development was the fielding of a RORO by Cardinal Shipping, the Cardinal Ferry I that connected Sorsogon and Samar. With San Juanico bridge already connecting Samar and Leyte and the Maharlika Highway already completed, intermodal trucks and buses started rolling into Tacloban and Leyte. In fact, in just one year of operation the intermodal link was already a roaring success with many trucks and buses already running to Manila. Soon other ferries were connecting Sorsogon and Samar including the Maharlika I of the government.

With this development the irreversible decline of Tacloban port began. It was a slide that never ever saw a reversal because what happened over the years was the buses and trucks rolling to Tacloban and Leyte just continued to multiply without abatement (and the ROROs in San Bernardino Strait also increased in number). Soon the passengers were already filling the intermodal buses and freight except the heaviest and the bulkiest was also slowly shifted to the trucks. Over the years the number of passenger ships to Tacloban slowly declined as a consequence.

In the late 1980’s, when the pressure of the intermodal was great there were still three national shipping lines with routes to Tacloban – Sulpicio Lines, William Lines and Sweet Lines. In the early 1990’s. when Sweet Lines quit shipping only the top two shipping lines then where still sailing to Tacloban with the Tacloban Princess of Sulpicio Lines and the Masbate Uno of William Lines. Incidentally, the infamous Dona Paz which burned and sank after a collision with a tanker in December 1987 originated from Tacloban.

The overnight ferry service from Cebu almost followed the same path and died at almost the same time. The last three shipping companies which had a route there were Roly Shipping, Maypalad Shipping and Cebu Ferries Corporation (which was the successor of CAGLI). But passengers slowly learned that the routes via Ormoc and Baybay were faster and cheaper and the connection was oh-so-easy as the bus terminals of the two cities were just outside the port gates of Ormoc and Baybay. The High Speed Crafts (HSCs) to Ormoc, mainly SuperCat and Oceanjet also made great strides and captured a large portion of the passenger market and it further denied passengers for Tacloban. With the HSCs and overnight ships from Cebu that leave Ormoc in the morning there was no longer any need for Tacloban passengers to wait until night.

The last rope for Tacloban port passenger-cargo ships was cut when the new coastal highway from Basey, Samar to Guiuan, Eastern Samar was completed. With that the passenger ships connecting Tacloban and Guiuan had to go as the fast and ubiquitous commuter vans (called “V-hire” in the province) suddenly supplanted them. Trucks also began rolling and some of these were even coming from Cebu via the intermodal.

Now only a few cargo ships dock in Tacloban port. There is still one cargo shipping company based in Tacloban, the Lilygene Sea Shipping Transport Corp. Gothong Southern Shipping Lines meanwhile still has a regular container ship to Tacloban but there are complaints that the rates are high (the consequence of no competition). Whatever, there are still cargoes better carried by ships than by trucks. However, some of the container vans for Leyte are just offloaded now in Cebu and transferred through Cargo RORO LCTs going to several western Leyte ports.

What might remain for a long time maybe in Tacloban port are the big motor bancas for Buad island in Western Samar which hosts the town of Daram and Bagatao island which hosts the town of Zumarraga. I am not sure of the long-term existence of the other motor bancas for the other Samar towns except for maybe Talalora as more and more they have buses that go to Tacloban and maybe soon the commuter vans will follow. Or maybe even the jeep. The lesson is with roads established the sea connection always have to go in the long term.

Tacloban port is improved now. Improving the port eases port operations but it will not make the ships come back contrary to what the PPA (Philippine Ports Authority) and the government say. It is cargo and passengers that make the ships come to a port but if there are other and better transportation modes that are already available then cargo and passenger volumes drop and sometimes it becomes uneconomical for the ship to continue operating.

So I really wonder what is the point in developing a port in the nearby town of Babatngon as an alternative to Tacloban port. Have the Philippine Ports Authority ever asked who wants to use it? It is not surprising however as the PPA is the master of creating “ports to nowhere” (ports with practically no traffic) especially in the time of Gloria Macapagal Arroyo who was so fond of those (for many “reasons”, of course).

In the past two decades the PPA always touted Tacloban port. For maybe they are based there. There was a denial that actually Ormoc port was already the main gateway to Leyte and it is no longer Tacloban port. Recently however, there seems to be an acknowledgment of the real score — that Ormoc port has actually been the de facto gateway already. The government is now developing Ormoc port and it is good that the PPA vessel arrival and departure site already covers it.

Whatever and however they try, it cannot be denied that the sun is already setting in Tacloban port. It is no longer the same port it used to be in the past because of the intermodal assault changed things.