Among the major liner companies, I found William Lines Incorporated striking in some ways. First, in their early days they were very loyal to the former “FS” ships as in they were operating no other type in their first 20 years. Others like Bisaya Land Transport was also like that but they were not a major liner company. Some other majors that initially had a pure ex-”FS” fleet like the General Shipping Company acquired other types earlier than William Lines. 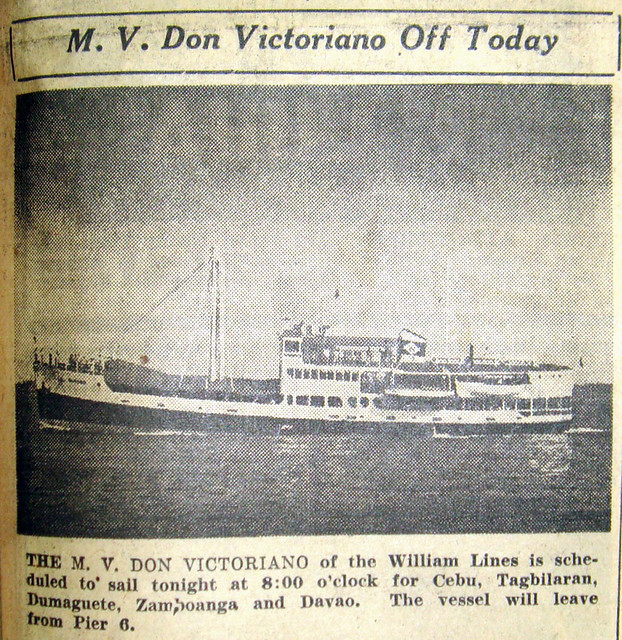 Actually, William Chiongbian did not start from zero. His father already had trading ships before World War II in support of their copra business. That was normal then before the war. Others that made it big in shipping after World War II had similar origins like Carlos Go Thong and Aboitiz (but the latter was already big even before the war).

The route system then of William Lines was very simple. 6 ships in 3 pairs will do a thrice a week Manila-Cebu-Tagbilaran-Dumaguete-Zamboanga-Davao voyages leaving Manila on Tuesdays, Thursdays and Saturdays. The rest of the fleet will do a once or twice a week sailing to Panguil Bay (Iligan and Ozamis plus Dumaguete) via Cebu. Was there a route system more simple than that?

It might be simple but actually William Lines was a beneficiary to the growth of traffic to southern Mindanao with the opening of the island to exploitation and colonization by Christians from the rest of the country. The routes to that part of the country were those that grew consistently over the years because of the big increase in population brought about by migration of people. With that came goods and produce that need to be transported.

Actually except for Manila Steamship which quit shipping early after the shock of losing their flagship Mayon to fire and explosion in 1955, all those that stayed in the southern Mindanao route lived long (the Compania Maritima quitting was another story). Many that did short routes from Manila even had shorter life spans like Southern Lines, General Shipping Company and Madrigal Shipping. The southern Mindanao area with its continuously growing production and trade buoyed the shipping companies that stayed there.

The other ships of William Lines in this period were Elena (which later became Virginia VI and Don Jose I), Elizabeth, Edward, Albert (which also became known as Iloilo City), Victor, Henry I and Grace I (which also became the first Manily City). All including the Don Victoriano (which became the second Elena) had their hulls subsequently lengthened to increase capacity. That was needed for the growing traffic and cargo in the routes of William Lines.

Within its first two decades, in 1961, William Lines also purchased the Kolambugan of Escano Lines. It was used to open a Cagayan de Oro route for the company and she was fittingly renamed as the Misamis Oriental. From Cagayan de Oro the ship also called in Iligan and Ozamis. Also acquired that year was the Davao of A. Matute which became the Davao City in the fleet of William Lines.

That same year the FS-272 of Philippine Steam and Navigation Company was also acquired and this became the Don Jose in their fleet. In 1963, the President Quezon of Philippine President Lines was also acquired and the ship became the Dona Maria in the fleet. At its peak the William Lines passenger fleet consisted of 11 former “FS” ships. However, I am not sure if the latter additions were all lengthened.

In 1966, William Lines acquired their first liners that were not former “FS” ships when they also began acquiring big former passenger-cargo ships from Europe like Go Thong and Compania Maritima. That was the new paradigm then and they were able to latch into it. It was a response to the growing need for additional bottoms when surplus ships were not yet available from Japan in great numbers.

That was the early history of William Lines, the tale of their first 20 years in shipping. Their growth into first rank will come after their first two decades until for a brief period they might have been Number 1 in local passenger shipping.

By the way, they had no ship losses in their first two decades. And that was pretty remarkable given the rate of liner losses over the decades and even in the modern era.

Maybe somebody should do a study what was their safety secret then.

The usual length of an unmodified ex-”FS” ship is 53.9 meters with a breadth of 9.8 meters and a depth of 3.2 meters. The Gross Register Tonnage (GRT), a measure of the ship’s volume is usually 560 tons.

The Length, Depth and GRT of the lengthened ex-”FS” ships of William Lines (the Breadths do not change):