In the Philippines there are three serieses of brand-new ships which started coming in the first half of this decade. The thing notable about them is they belong to different designs. One of these are the Oceanjets that were made from Australian kits and assembled in Labogon, Mandaue City. The other is the series of catamaran ROROs of Archipelago Philippine Ferries, the FastCats (although some say they are just “Cats” now) which are built in China. And finally we have the series of new ROROs by Starlite Ferries that were built in Japan.

This series consists of eight in number although more are expected to come soon as the contract is a series of ten ships. Two of the seven came via the Southwest Premier Ferries and Southwest Gallent Ferries whose owner is the one which arranged the bank financing for Starlite Ferries and these are the SWM Stella del Mar, the SWM Salve Regina and the Stella Maris, the 6th, 7th and 8th ships in the series. The first five ships which went direct to Starlite Ferries consisted of the Starlite Pioneer, Starlite Reliance, Starlite Eagle, Starlite Saturn and the Starlite Archer. 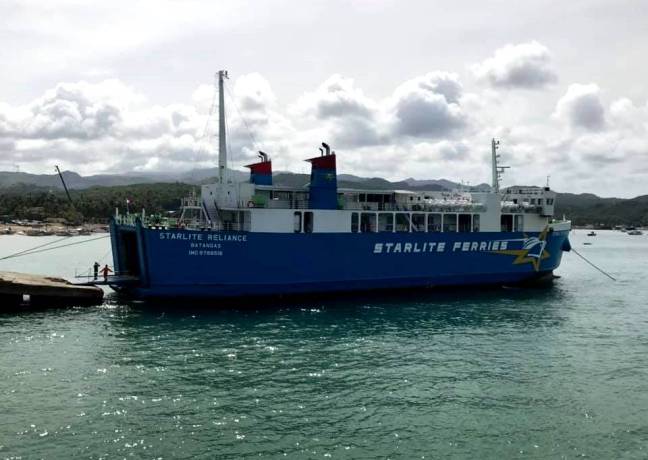 This series’ external design is not that really a looker but merits of a ship are not only judged by that. This series has high sides and a great Depth and so greater stability is claimed (but then that could also be a disadvantage in shallow ports in low tide condition). However, being a new ship will trump all of that with its qualities of being reliable and economical to operate.

The Length Over-all (LOA) of the series averages close to 67 meters with a Breadth of 15.3 meters and a Depth of 9.4 meters. [Depth is the distance from the underside of the ship up to the freeboard deck or where water will first come in. Having high sides increases the Depth.] The Gross Tonnage or GT of the series averages 2,700 nominal tons and the Deadwight Tonnage (DWT) is just over 900 tons in average. The passenger capacity of the series is over 700 persons.

Access to the ship is via a stern ramp that leads to the car/cargo deck which has four lanes and the cargo deck measures nearly 240 lane-meters. There is an elevator in the car deck for the disabled and weak passengers which is not common for a passenger ship. Generally, the upper passenger deck consists of Economy Class which is non-aircon. The forward portion of the lower passenger deck consists of the Tourist and Business Classes with a kiosk between the aircon portion and the non-air Economy Class in the stern of the deck. The aircon classes are quiet, comfortable and carpeted. The attendants are professional and not merely hangers-on. The ships are very clean and tidy.

The series boasts of the latest in navigation and safety, as to be expected. The great Breadth of the ship is also touted to add in stability along with the added capacity. The ships in the series also have side thrusters which aid in maneuvering the ship. This series of sister ships are powered by twin Yanmar engines that develop 3,650 horsepower that gives the series a design speed of 14.5 knots. Being modern, the series are also equipped with bulbous stems which should give an additional speed.

Though the series was designed by Kegoya Dock in Kure, Japan not all of the ships were built in that yard as the Starlite Eagle was built by Fukushima Zosen in Matsue, Japan. Kegoya Dock is an old shipbuilder in Japan.

The series started coming in 2013 with the Starlite Pioneer and the latest, the Stella Maris arrived in 2019. Interestingly, the new Trans-Asia 19 of Trans-Asia Shipping Lines Inc. (TASLI) is also a sister ship to the series. Interestingly again, the Starlite Ferries and TASLI are now both in the stable of the Chelsea Logistics of Dennis Uy, the new king of Philippine shipping. 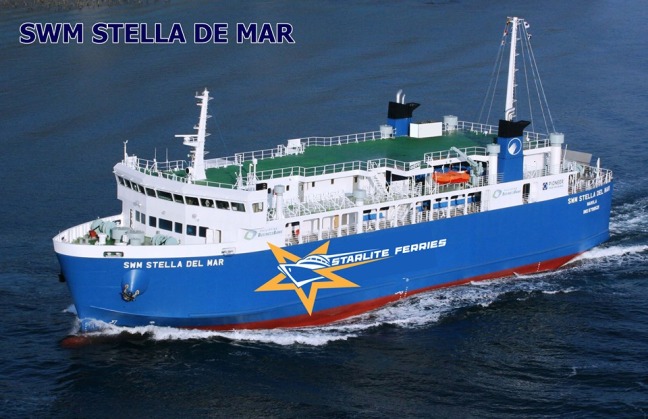 From the early confines of the limited routes of Starlite Ferries, the company has already expanded to the Cebu-Surigao route using two ships in the series which both came from the Southwest Premier Ferries and the accommodations were changed into overnight ferries to adapt to the different condition of the route. A new route will be served by the company in a short time.

A few days ago, the Philippine Ship Spotters Society (PSSS) was a given a free tour to Surigao and back by the company to better explore and expose their newest ship, the Stella Maris.

More ships from this series will still be coming to the Philippines in the coming days. They will serve as standard bearers in the modernization of our ROROs and I am sure they will be fixtures of Philippine shipping for a long, long time.

Very recently, there are now three RORO companies vying in the route from Cebu to Surigao and vice-versa and for me that is a sea-shaking event but not a tsunami. It was Medallion Transport Inc. which started this thing when they fielded their biggest ship, the Lady of Love in the said route. To be sure she is full, they just charged the rolling cargo rate in the Cebu to Leyte routes and with that they became immediately successful as in their car/cargo deck became filled immediately.

Lady of Love by Mike Baylon of PSSS

The difference of Medallion Transport over the old route holder Cokaliong Shipping Lines, Inc. (CSLI) is that they immediately emphasized rolling cargo. Meanwhile, the latter still stresses loose and palletized cargo to be handled by forklifts, one in the wharf and one inside the car/cargo deck. Cokaliong Shipping Lines dominates the fulfilling of the needs for goods from Cebu of the stores in Surigao and maybe Medallion Transport realized they cannot really compete in that.

What was immediately affected by Medallion Transport were the ships with rolling cargo between Cebu and Leyte that still has to cross the Surigao Strait which means these are the Cebu-Mindanao vehicles and some of that are still headed to Davao, General Santos City, Sultan Kudarat and Cotabato. Although it looks like the Cebu-Cagayan de Oro and Cebu-Nasipit are more direct routes, few load vehicles in those routes as the rates are too high because rates in the sea are far higher than using fuel on land and so vehicles look for short sea crossings.

So, what vehicle owners do is either go to Leyte first from Cebu and then load the vehicle in either the Liloan or Benit port in Southern Leyte or they could go to the ports of southern Cebu and load their  vehicle to Negros island and load again the vehicle in Dumaguete port to Dapitan port. Vehicle owners from Iligan City and Zamboanga del Sur use this route. Now in that area there is already the direct Samboan to Dapitan route which bypasses the port of Dumaguete.

Currently, with a cheap and direct option to Surigao there is no more need to use the route via Leyte to Surigao. It is not only cheaper but it is also less tiring to the driver and the passengers. One can sleep in the overnight ferry-RORO to Surigao and be still fresh upon arriving in Surigao City.

Lady of Triumph by Jose Zeus Ranoco Bade of PSSS

Cokaliong Shipping Lines will always stay in the Cebu to Surigao route doing their old stuff. Surigao is their home turf as the company founder hails from that city, one of the reasons why they dominated that route before. However, since there is also a competition in the passenger business, Cokaliong Shipping Lines was forced to field better and faster ships. 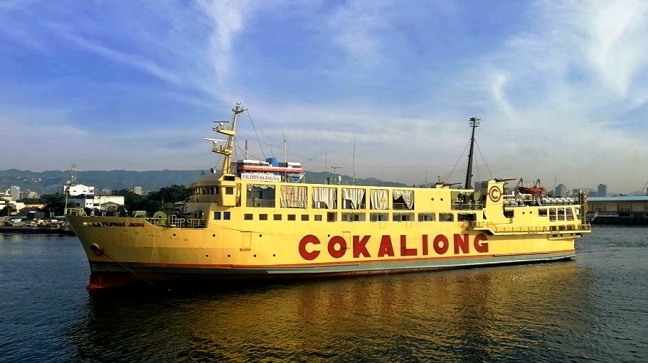 I cannot really stress the names of the ships sailing the route because ship assignments always change. Where it was the Lady of Love before for Medallion Transport now it is their newly-fielded Lady of Triumph which is in the route as the former is being refitted. Where before Cokaliong Shipping Lines used their good Filipinas Cebu to counter the fast Lady of Love, currently they are using the sister ships Filipinas Jagna and Filipinas Surigao del Norte in the route and the two were just recently fielded. The only problem for this competition is the ships arrive at about 4am and that is too early for the driver who still wants some sleep especially if the drive is still long.

Very recently, a RORO Starlite Ferries Inc. also fielded a RORO in this route. Their ship is the new Stella Maris. However, the difference in the style of the Stella Maris is she would sail twice a day which means a day sailing and a night sailing. I just wonder if there is enough cargo for them for that frequency. Like Medallion Transport, she stresses rolling cargo over loose and palletized cargo.

Maybe there is something in this route to attract three shipping companies and four competing ferry-ROROs. Probably, the route through Leyte to Mindanao with two sea crossings is kaput now as it will always be dearer and with more strain to the driver and also a longer transit time.

This development bears watching as this route not only impacts Surigao but also Nasipit and Cagayan de Oro ports. Lately, I heard the rates to Cagayan de Oro from are already cheaper. That is the beauty of competition – the consumers win.

Verano Port of Surigao City by Aris Refugio of PSSS.

If this route holds then Surigao City as point of entry to Mindanao from Cebu will be highlighted more.