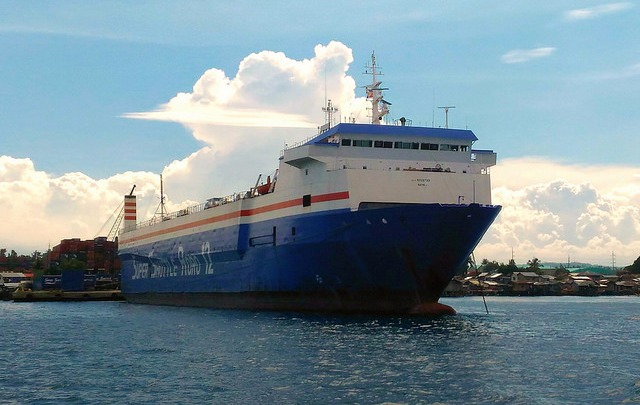 The Super Shuttle RORO 12 of the Asian Marine Transport Corporation (AMTC) is one of the biggest Cargo RORO ships in the country. It is notable not for its size alone but also for the fact that she is a balikbayan which means she was once a Philippine ship, was sold abroad and came for the second time. The only other ship here that has the same reputation is the St. Therese of Infant Jesus of 2GO which was the former SuperFerry 16 of Aboitiz Transport System.

Super Shuttle RORO 12 first came to the country in 1995 when she was then known as the ROCON I of William Lines Inc. She was the biggest cargo or container ship in the country then if flag of convenience ships (FOCs) are excluded. In gross tonnage, she was even bigger than the Princess of the Orient of Sulpicio Lines Inc., the biggest liner then in the country although the latter is longer.

When William Lines Inc. acquired the ROCON I I think it was their answer to the purchase of the Ukraine-built and brand-new Ramon Aboitiz and Vidal Aboitiz of Aboitiz Jebsens which were also big Cargo RORO ships then by local standards. William Lines has been in the receiving end in the liner one-upmanship with Sulpicio Lines in the recent years then and maybe they were not willing to be on the receiving end of another shipping company and so getting the biggest Cargo RORO ship is maybe their way to restore pride somehow. Well, when the ROCON I arrived in Cebu she really turned heads especially since she is markedly tall.

ROCON I was built as the Mercandian Gigant for Per Henriksen. She has the ID IMO 82227333 and the MMSI Code 341028000. She was built by Danyard A/S in Frederikshavn, Denmark in 1984. Of steel hull she has two masts, one deck and two ramps at the stern. She has a total of three vehicle decks plus a sun deck which is also a car deck. The lowermost car deck is accessed by lowering a movable ramp. The main vehicle deck has a mezzanine at the front.

After arriving in 1995, this ship did not serve long with William Lines because on the first day of the next year the “Great Merger” in Philippine shipping materialized which produced the shipping company William, Gothong & Aboitiz (WG&A). In the combined fleet of WG&A she was known as the Super RORO 200. However, with so many container ships in the company and its stress on carrying express container vans in its ROPAX liners, the Super RORO 200 was soon put up for sale along with the SuperRORO 100 and SuperRORO 300. In 1997, she was bought and she became the Caribe Merchant of Crowley Maritime and she did Caribbean routes. 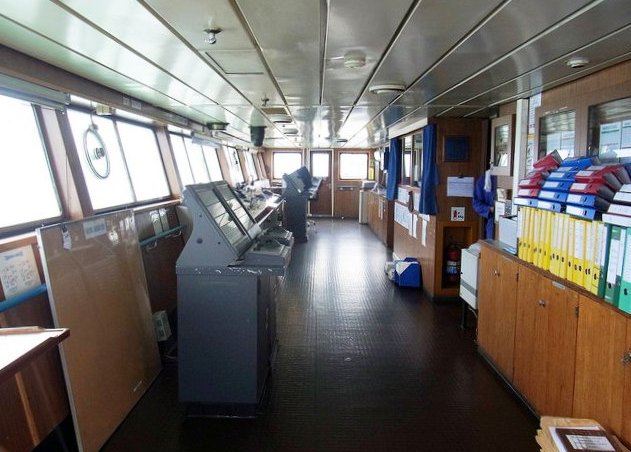 She subsequently became known as the Amirouche and flagged in St. Kitts and Nevis. In 2014, Asian Marine Transport Corp. (AMTC) purchased her from Nolis and she was conducted to the Philippines by a local crew. On arrival her first refittings were done in AMTC’s wharf in Pier 8 in Mandaue, Cebu before she was brought to Subic for the final refitting and sea test. Funny that not many still recognized here after 20 years. Doubly funny, the AMTC exec I asked if she was a local ship before seemed to have played poker with me.

Locally she carries both vehicles and container vans, both wheeled and not. Container vans are the primary cargo of the ship and the not-so-many cars she carries are mainly brand-new vehicles destined for car dealerships in the South. Locally, she does not carry truck and sedans with its drivers like in Europe. She is also not authorized to carry passengers, a restriction on local Cargo ROROs which are treated as cargo ships by MARINA.

The ship has a medium-sized functional bridge with an attached navigators’ room. Behind the bridge and below are the cabins for the officers and the crew along with the galley (the ship’s kitchen), mess (the ship’s restaurant) and the officers’ lounge. These are all housed in the ship’s tower.

Currently the ship serves the company’s Manila-Cebu-Zamboanga-Davao-General Santos City route which is AMTC’s longest route. The schedule of departures and arrivals are most of the time approximates as the company adjusts for the volume of cargo so technically she is not a cargo liner in the strictest sense of the term. Locally, the long-distance Cargo RORO ships of the company are governed to 12 knots and speeds up only if needed.

I have visited this ship twice and it looks like she is still in good shape. By local standards her age is not that old and MaK engines are a trusty make. Since many of the Cargo ROROs of AMTC are sourced from Europe the majority of their Cargo ROROs are actually engined with MaKs. Engineers who have worked abroad have experience with this engine make and they are many. Notably, among the big Cargo ROROs of AMTC, Super Shuttle RORO 12 has the least power but she is not the slowest.

I hope this Cargo RORO serves AMTC well. This time around maybe she deserves a longer stay in the country and I hope she will be appreciated more.