Once upon a time, in the early days of connecting islands, LCTs had a place as exemplified by Millennium Shipping in the 1970’s and the LCTs connecting Mactan island and the islands of Samar and Leyte. But as it moved into the 1980’s and the 1990’s, it was the short-distance ferry-ROROs that began connecting the islands like in San Bernardino Strait, in Surigao Strait, in Verde Island Passage, in Guimaras Strait, in Tanon Strait, in Bohol Strait, across Camotes Sea, in Basilan Strait and in Panguil Bay. LCTs began losing favor then and some of the reason might be psychological. There was a belief then that LCTs were “less safe”.

It was actually only Maayo Shipping and Tri-Star Megalink which bucked the trend in those decades before the change of the millennium by still using LCTs as passenger-cargo carriers. To some extent, Asian Marine Transport Corporation (AMTC) can also be counted here before the start of the new millennium. Among the the most notable operator of passenger-cargo LCTS in this millennium are Lite Ferries and Starhorse Shipping Lines. Of course, LCTs also connected Samal island, Guimaras and Olutanga islands but I would rather exclude it here as they were very short connections like the connection across Sula Channel of Albay to Cagraray island.

LCTs as means of transport are slow and slower than short-distance ferry-ROROs. Their passenger accommodations are also very basic and small and can be uncomfortable. They were never really meant to be people carrier unless one is talking of the hybrid Korean LCTs (like the Ma. Angelica Grace, Reina Banderada, Reina Justisya and Star San Carlos among others) which have more comfortable passenger accommodations and even airconditioning plus bigger engines which afford speeds higher than the basic, short-distance ferry-ROROs.

I do not know which started the trend of using LCTs for vehicles mainly with not much intent to carry passengers. The most significant I noticed that had an operation like this was Golden Bridge Shipping of the Lua family (owner of a tramper company and Oceanjet) which has its base in Cansaga Bay and had a route to Hindang, Leyte. Early on they were known as Socor Shipping. Of course, Mandaue Transport also had a route from Mandaue to Tagbilaran and Simpoi Shipping had a route from Carmen to Ormoc.

There were also LCTs that were used not for rolling cargo but as container van carriers. Ocean Transport chartered LCTs from Asian Shipping Corporation for this purpose which was copied by others until they were able to acquire their own LCTs. But of course, transit time from Manila to Cebu can take up to 4 days but container vans won’t protest unlike passengers. Some Asian Shipping Corporation LCTs were also chartered to load container vans from Manila to Cagayan de Oro.

These operations are of course Cargo RORO operations. The only difference is instead of using Cargo RORO or RORO Cargo ships, LCTs are used. That is why I termed these LCTs as “Cargo RORO LCTs”.

Starting in 2012, LCTs from China began appearing in great number in Mactan Channel and the biggest owners were Cebu Sea Charterers, Broadway One Shipping, Concrete Solutions/Primary Trident Marine Solutions and Royal Dragon Ocean Transport. The first two simply had numbers as names of the LCTs. The third one was the owner of the Poseidon LCTs and the last one was the owner of the Meiling LCTs. Asian Shipping Corporation also bulked up their LCT fleet. Supposedly, these LCTs which were called “deck loading ships” in China will be used to transport ores from Surigao to China. 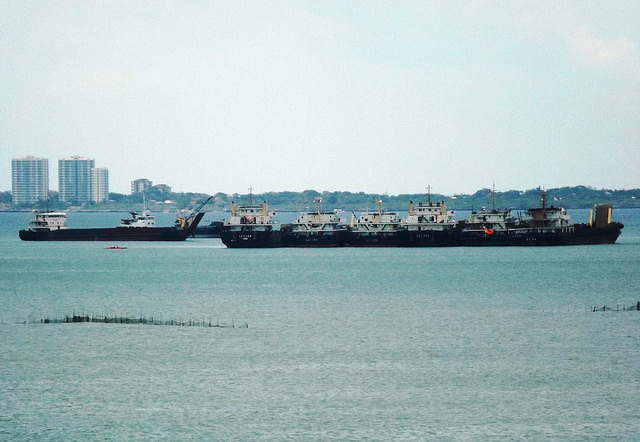 However, two major happenings intervened. One, the need of China for ores declined and in November of 2013, Typhoon “Yolanda” wreaked havoc in Eastern Visayas. In the aftermath, in the need for relief and rehabilitation of the region, trucks and trailers have to cross. This happened during a time that the long-distance trucks were already running via Eastern Visayas as substitute for the ship-borne container vans and many of these are still destined for Mindanao.

Immediately, mile-long queues of trucks formed in the ports of Matnog, Allen, Liloan, Benit and Lipata leading to loud protests. MARINA then allowed the temporary use of LCTs which became de facto permanent until today. Meanwhile, there was also a great demand for bottoms to be used by trucks across Camotes Bay. Suddenly, the moored “deck loading ships” in Cansaga Bay was crossing Camotes Bay, San Bernardino Strait and Surigao Strait. Cebu Sea Charterers and the Poseidon LCTs slowly begans Cargo RORO LCT operations together with the Adnama LCTs (many more were used in Surigao and elsewhere). Roble Shipping meanwhile chartered LCTs from Asian Shipping Corporation which they replaced when they were able to acquire their own LCTs.

There was also an upsurge in LCT demand to Bohol and some old LCT began plying routes. Feeling their grip threatened, Lite Ferries bought them all lock, stock and barrel aside from buying additional LCTs. Meanwhile, Cebu Sea Charterers invaded other routes like the Carmen-Ormoc, the Dumangas-Banago and the Tuburan-Escalante routes. Suddenly, the lowly LCTs which became Cargo RORO LCTs looked menacing. Even the pioneer Golden Bridge Shipping which had queues even before “Yolanda” feels threatened now.

How did this come to be? One reason is at the start, the overnight ferry companies crossing Camotes Sea did not give due regard to the rolling cargo or vehicles. They were too content in their successful palletized and loose cargo operations and they underestimated the need of the rolling cargo. At the start only Golden Bridge Shipping, Simpoi Shipping and Asian Marine Transport Corporation were servicing them. It seems Lite Ferries saw the need earlier than their fellow overnight ferry companies. Well, they are strong in rolling cargo operation in Bohol and is even dominating it.

Secondly, in terms of rates none can beat the Cargo RORO LCTs. They might be slow but in terms of rates they are far cheaper than the overnight ferry companies as in they can give rates that are cheaper by 40%. Well, they don’t need to invest in passenger services and accommodations and they have small engines compared to overnight ROROs. Now they even carry container vans not in trailers to Leyte from Cebu superseding the container ships that used to call in Leyte ports from Manila. 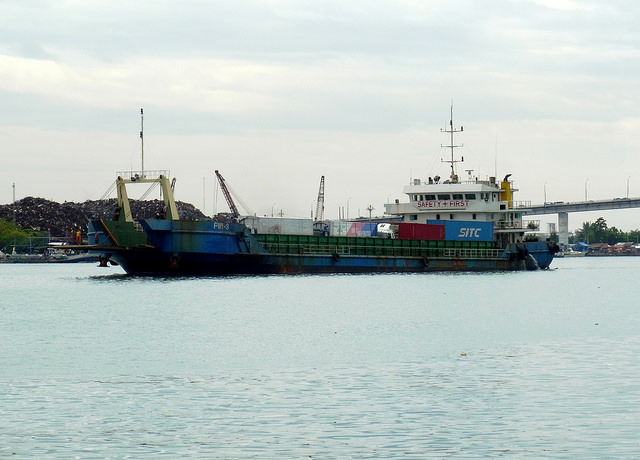 That is always the danger brought by Cargo RORO LCTs, the low rates. Now feeling they can’t beat it, the overnight ferry companies are beginning to acquire their own LCTs. Lite Ferries is so well ahead in this game but Roble Shipping is already following suit. Medallion Transport seems not to be that worried yet because compared to other they saw immediately the need for rolling cargo operations and were not too dependent on palletized and loose cargo operations. After all they started in short-distance ferry-RORO operations and so they might have had a better understanding of rolling cargo from the start.

The old ROROs better adjust now. From what I heard even the big Asian Shipping Corporation which has the most number of ships in the Philippines is joining the fray. It seems they might have already tired of just chartering LCTs.

In the eastern seaboard, I heard the Cargo RORO LCTs are already the favorites of the truckers. As they say money talks. Price point as decision point is simply too easy not to miss. Everybody wants savings.

To me, it is no longer a question if the Cargo RORO LCT sector will take a slice of the pie. The question is how much. From container ships to liners to overnight ships to short-distance ferries, all are threatened. They will not be overwhelmed but they must be prepared to share the pie with the Cargo RORO LCTs. By how much, now that is the guessing game. All I know is the Cargo RORO LCT rates are simply unbeatable. And that might be sending shivers now down the spine of the competition.

And I dare say this development is good. Rolling rates are simply too high in the Philippines because the regulatory agency MARINA never learned how to compute rates. It is as if fuel and distance are never really factored in.

Rolling cargo rates of the LCTs across Camotes Sea is now lower than RORO rate across Surigao Strait. How did that happen?