In the recent decades it is only in the 1980’s where I saw a relatively massive ship-breaking of Philippine ferries. Two big factors worked in confluence in that. One, the backbone of Philippine ferries of the postwar years, the former “FS” ships were already breaking down on its own because they were already 40 years old on the average which was already far beyond their estimated design life. Moreover, there was already a shortage of parts and to keep other “FS” ships running some others have to be cannibalized. And these ships were actually badly outgunned already by the newer ferries and as cargo carriers (some were used in that role when they were no longer competitive), they were already overtaken already by the newly-fielded container ships and by cargo ships with fixed schedules like the ships of Sea Transport. 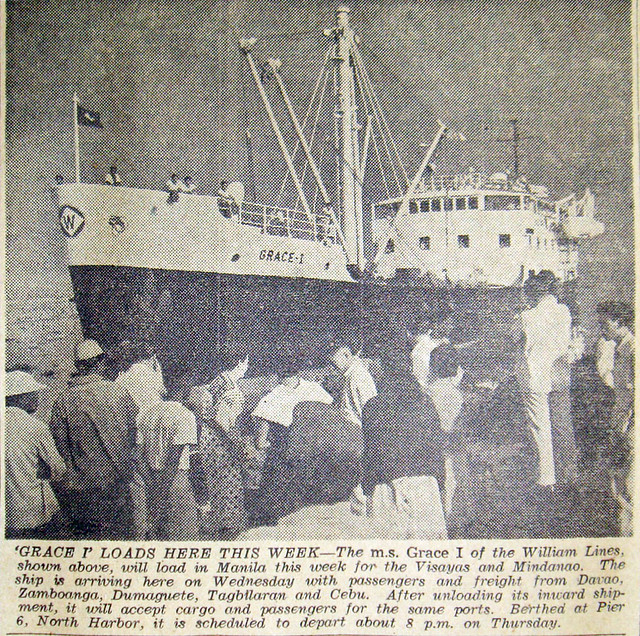 The other big factor was the great economic crisis of the 1980’s, the greatest since World War II when there was a contraction of the economy, inflation and the exchange rate were runaway and there was simply no loans available then and interest rates were sky high. Such situation will simply contract the need for ships. This was exacerbated by companies falling by the wayside, bankrupt and shuttered. That even included our auto manufacturing plants. In shipping, a significant percentage of our shipping companies folded and with it went their ships because the remaining shipping companies were just in survival mode and in no mood to take over their ships. That was the second main reason why many of our former “FS” were broken up in the 1980’s. Most of them were scrapped locally specifically in Navotas. The passenger ships of the shipping companies that went belly up in the 1980’s like Compania Maritima also ended up in the breakers and they were not limited to ex-”FS” ships. The 1980’s was really a cruel decade for shipping.

Earlier, in the 1970’s, the former Type “C1” ships were also lost as a class because their engines were no longer good. That also was true of the former Type “N” ships. These ships simply surrendered because they were no longer reliable and parts were hard to come by. And that is one truth in shipping. If a ship is no longer good especially the engines and it cannot be re-engined anymore then it goes to the breakers and no government order to cull is needed for that.

An example of a former Type “C1” ship (Credits to Phil. Herald and Gorio Belen)

After the 1980’s, ship-breaking followed three main trends. One is the trend set by William, Gothong and Aboitiz (WG&A) and later by its successor Aboitiz Transport System (ATS). WG&A has the penchant to dispose of ship they think are already superfluous. That is actually what happens in mergers and acquisitions (M&A’s). There will always an excess in assets including ships and personnel and the new entity will try to dispose of them to junk “non-performing assets” (NPA’s). That is the reason why still-good liners and overnight ships were disposed to the breakers. There was really no good technical reason to send them there and die.

On the other hand, WG&A and its subsidiary Cebu Ferries Corporation (CFC) had some ships that were nearly ready for the breakers because their engines were already beginning to get unreliable. WG&A tried to sell them as still “good” ships and a few shipping companies got conned buying ROROs with problematic engines and obsolete cruisers. The stinged companies like Sampaguita Shipping had to dispose later these ships. 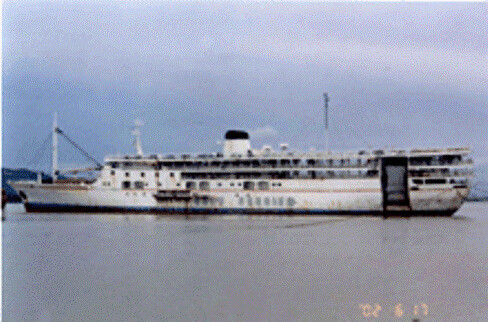 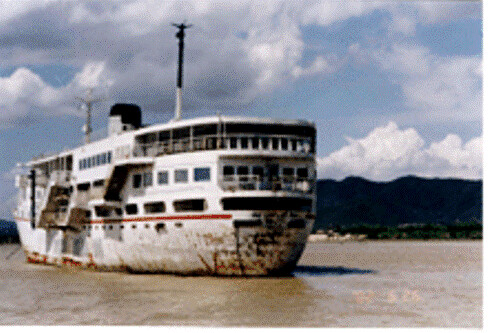 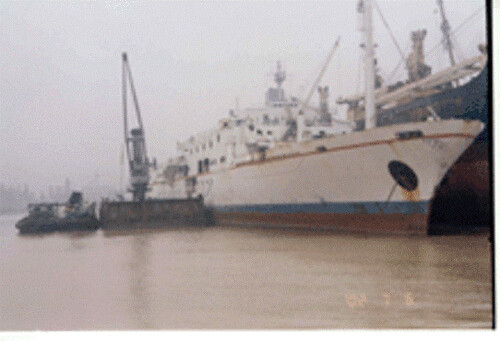 Sold to raise cash (From http://www.greenshipbreaking.com)

When the two partners in WG&A divested, the Aboitiz family had to dispose of ships to pay them off. This was the reason why Aboitiz Transport System (ATS), the successor company to WG&A had to sell a series of still-good ships, passenger and container, to China breakers early this millennium. In effect, the Gothong and Chiongbian families were paid with cash from scrap metal and their old ships were gone forever.

Aboitiz Transport System also had to sell other ships to the breakers (their liners are too big to be overnight ferries) in order to acquire newer ferries. That was done in the middle of the 2000’s.This is called renewal of the fleet and this is done all the time in other countries. Of course, a company will try to sell their weaker ferries in order to acquire new ones. This pattern also carried over into the successor company of ATS, the shipping company 2GO.

But again the reason to sell was not always based on technical reasons (as in the ship is no longer reliable) but on other considerations. I have observed that the creation of WG&A and its subsequent dissolution created a lot of crooked reasons for selling ships that were not based on the condition of the ship. Some of those were simply connected to cutting of routes and frequencies and the need to come up with cash.

Sold before its time for crooked reasons (Photo by Vinz Sanchez)

Meanwhile, competitor Negros Navigation Company (NENACO) was hit with illiquidity after their massive expansion fueled by bank loans backfired and they had to seek court protection from garnishment proceedings. However, these resulted in ships being laid up and offered for sale. These ships ended up in the hands of foreign breakers because liners were in excess then (and ATS does not buy ferries from competitors) as budget airlines and intermodal buses cut into their revenue..

But the next chopping of ships en masse was even more cruel. This was as a consequence of Sulpicio Lines getting suspended from sailing after the Princess of the Stars capsized in 2008. Stringent conditions were placed by MARINA, the maritime regulatory agency on Sulpicio Lines’ return to passenger operations. Meanwhile, the bulk of their fleet rotted in their Mandaue wharf and in the middle of Mactan Channel. Along with strong public backlash, Sulpicio Lines lost heart and sold off their entire fleet to foreign breakers and a great passenger fleet that took five decades to build was lost in just one stroke. Those who knew shipping knew this great passenger fleet won’t ever be replaced again. Ironically, it is the government bureaucrats regulating them which did not know that. 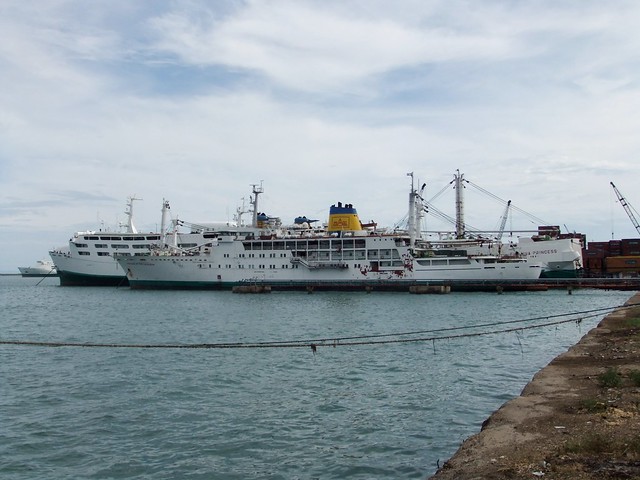 None of these survived the suspension

As a general rule, companies that do not run into trouble do not send ships to the breakers. WG&A (divestment of partners), Negros Navigation (illiquidity) and Sulpicio Lines (suspension) all ran trouble (and MARINA, the maritime regulatory agency tasked with the country’s maritime development was of no help to them whatsoever). Non-liners frequently do not run into trouble and if ever they fold, many of their ships are taken over by other shipping companies (as their ships are easier to sell). That is what happened to the likes of Bicolandia Shipping Lines, San Juan Ferry, Western Samar Shipping Lines, Kinswell Shipping Lines, Shipsafe/Safeship, Mt. Samat Ferry Express, Moreta Shipping Lines, etc. But this did not happen to most of the big fleet of Viva Shipping Lines and its legal-fiction companies, to Sampaguita Shipping and SKT Shipping/Kong San Teo Shipping, both of Zamboanga, Tamula Shipping and many others..

Again, another rule, it is easier taking over a failed small company and small ferries because the sums involved are not astronomic. If it is a big liner company that gets into trouble, it is only the foreign ship-breakers that have the money to buy their ships. 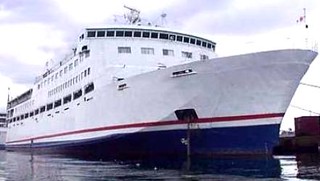 A photo when this ship was for sale; ended in the breakers

I just hope our government understands more our ferry companies, their travails and the difficulty of keeping ferry companies afloat. From my observation with government it seems many of them think ferry companies are raking in money. It is not the lure of money which keeps them in shipping but simply their passion for shipping.

Our shipping sector is actually in distress but I still have to hear or read a government pronouncement acknowledging that. They push the shipping companies to modernize in a tone that as if buying ships is just as easy as acquiring buses. But the inescapable truth is our ferries are actually graying now. And so I fear for them, not because they will sink but we all know nothing lasts forever. I wonder if there will be a mass extinction of ferries in the future, say a decade from now like what happened to the “ex-FS” and ex-”C1” ships. If that happens maybe we will more LCTs and maybe surplus ferries from China.