While the two vessels were built from the same ship plan of Japanese design, it was intended that one will be built in Japan with Filipino engineers observing the process so that the second one could be built in a Philippine yard with the experience gained. The idea was to get the moribund government-owned shipyard in Bataan to get going again. Japanese soft loans were used to build the ships which part of the “Philippine-Japan Friendship Highway” package that also included funds to build the likes of the San Juanico Bridge and the RORO ports along the route. 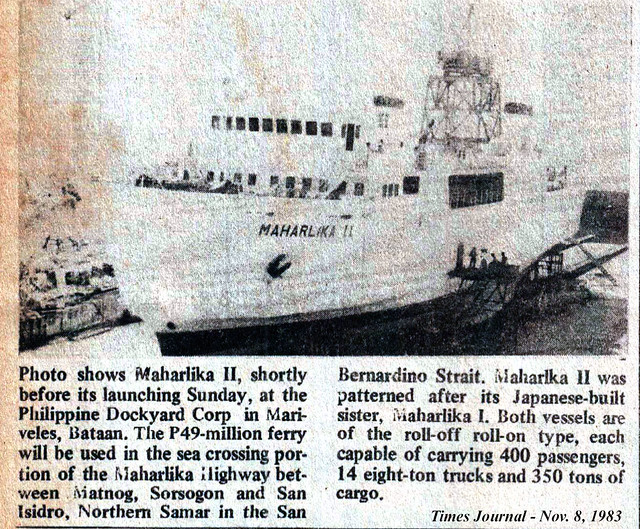 “Maharlika I” was built by Niigata Engineering in their Niigata yard and was completed on January of 1983. Meanwhile, “Maharlika Dos” was built in the Mariveles yard of Philippine Dockyard and was completed on July of 1984. Philippine Dockyard was the former NASSCO (National Shipyard and Steel Corporation) which built the ferries “General Roxas” and the “Governor B. Lopez” in 1960 and 1961 (incidentally those two were the last ferries built by that shipyard before the Maharlika Dos).

As RORO vessels, the sisters were equipped with ramps at the bow and at the stern as she was designed without the need for the ships to still turn around. Their bow ramps were of the more complicated “visor” type where the bow of the ship has to swing up first before the ramp can be deployed. The stern ramps were of the conventional two-piece design. In later years the bow ramps were no longer in use (“visors” are additional maintenance items).

The two sisters were not of identical dimensions as the “Maharlika I” was longer at 66.3 meters versus the 60.0 meters of the Maharlika Dos. They shared the same beam of 12.5 meters but the Gross Tonnage (GT) of “Maharlika I” was higher at 1,971 tons versus the 1,865 tons of “Maharlika II”. The two had the same twin Niigata diesel engines that produced a total of 3,200 horsepower and giving them a service speed of 14.5 knots using two screws.

Between the two, “Maharlika I” has the bigger passenger capacity at 524 with “Maharlika II” having a capacity of 417. There were no attached passenger ramps to the two. When the ships dock a movable ramp was attached to the ship which is not fastened safely most of the time. Cargo capacity, meanwhile, was 14 trucks or buses and more if combined with smaller vehicles.

Initially, it was the Philippine government that operated the sisters starting in 1984. In the late 1990s the two, however passed on to the control of the twin company PhilHarbor Ferries and Archipelago Ferries. The two were no longer in pristine condition then as they aged fast, a process “normal” for government-owned equipment. The decline was, however not reversed and soon the two were no longer reliable. They were operated even with only one engine running that lengthened considerably the sailing times. Interviewing a crew member, he told they just clean and repaint the parts and put it back rather than replacing it as called for in preventive maintenance. I have seen the two not sailing because two engines are busted.

In  passenger service, there was really none to speak of and the Maharlika sisters were not even clean and tidy. There was a foul smell especially in the toilets and it smells of the sweat in the air-conditioned section. Overloading, too, was rampant especially in the peak seasons when ferries in the route were still few. Sometimes I feel lucky having an air vent for a seat. It beats the muddy stairs anytime and it is airy, at least.

For a country like the Philippines which has a hundred ferries that are 40 years old and above that are still sailing right now, the sisters did not live long lives. “Maharlika I” was deemed “BER” (Beyond Economic Repair” before the first decade of the new millennium was over and they tried to sell it for scrap. Initially, that went for naught as somebody questioned the move and “Maharlika I” was just moored in San Isidro, Samar. Eventually, she was broken up in Navotas in 2010 after sailing less than 25 years.

It seems parts from “Maharlika I” were transferred to “Maharlika II” as initially “Maharlika II” ran well after “Maharlika I” was sold. But soon it seems her old disease caught up with her once again and her sailing time for her 38-nautical mile route went up to 4.5 hours again which signified she was again running on one engine. She will depart one hour ahead of “Super Shuttle Ferry 18” and yet that ship will catch up with her midway into the Surigao Strait.