The Jadestar Tres and Jadestar Seis were once small short-distance ferry-cruisers by Philippine Ship Spotters Society (PSSS) definition. These two are sister ships and before they plied the Cebu-Tubigon short-distance route for Jadestar Shipping Lines. This company has folded now after initial success and these sister ships are the only ones still sailing from the old Jadestar fleet although in different capacities and in different places now.

Both ships arrived in 2005 and were once the workhorses of Jadestar Shipping in the Cebu-Tubigon route together with the Jadestar, the first ferry of the company as the Jadestar Nueve and Jadestar Doce did not play prominent roles for the company. Maybe that was because their different designs might not have been well too-suited even from the start (Jadestar Nueve, a former Hongkong ferry was very tall and sways in the Bohol Strait wind and Jadestar Doce was a Low Speed Craft catamaran). It was the three which then can be usually found in docked in Pier 3 or sailing in Bohol Strait with their distinctive red livery.

The two ships have steel hulls with  raked stems and  transom sterns. The sister ships have a single mast, two low funnels and two passenger decks. As cruiser ships, they did not carry vehicles and hence they did not have ramps for rolling cargo nor did they have car decks and this could have what was fatal to their careers in the Cebu-Tubigon route.

Jadestar Seis has a declared capacity of 502 persons while that of Jadestar Tres is 512 persons. These are all in sitting accommodations. The sister ships are both powered by single Daihatsu engines of 1,000 horsepower and they have a design top speed of 12 knots. However, in Bohol Strait they were usually doing 10 or 10.5 knots only.

The sister ships have an airconditioned Tourist class accommodation at the front of both the upper deck and the lower deck, the original passenger accommodations in Japan. At the rear of those are the open-air Economy accommodations. Some luggage and cargo can be stowed in the rear of the lower deck above the open engine room which is noisy (and so passengers avoid that area). However, few take the Tourist class as anyway the aircon and the smell were not first rate and nor are the seats.

At the start of their passenger operation in 2004, Jadestar Shipping found early success as people of Bohol are wont to going to Cebu for their needs. Cebu is also the transit point for many coming from other places like Mindanao if they are going to Bohol. Bohol’s tourism was also picking up and there are many Bol-anons studying or working in Cebu. Tubigon was also fast developing to be the alternate port to Tagbilaran and actually it was a cheaper alternative as it was nearer to Cebu at only half of the distance to Tagbilaran.

However, things always change and sometimes paradigm changes happen that upsets the old order of things. Lite Shipping, buoyed by many and fast ship acquisitions fielded the double-ended RORO ferries Lite Ferry 9 and Lite Ferry 10 in the Cebu-Tubigon route in 2009. Their challenge to the route was also tightened by the fielding of the Lite Ferry 22, a ROPAX LCT and the Lite Ferry 23, a low-speed catamaran RORO in the Mandaue-Tubigon route. These two were concentrating on the rolling cargo (i.e. vehicles) to Bohol.

Since rolling cargo revenue far outweighs passenger revenues (while rolling cargoes also bring passenger revenues from the vehicles’ passengers) these ROROs can run with less than half full of passenger load as long as they have a good load of vehicles. And Jadestar Shipping do not have that advantage since their ships are cruisers. Cruisers, by its very nature cannot carry a significant amount of cargo, even loose cargo.

In 2010, the Star Crafts fastcrats of Malaysian origin began appearing in the route. At double the speed of the Jadestars they can do the Cebu-Tubigon route in just an hour versus the two hours of the Jadestar while the fare is not double. This proved to be a big come-on especially since the Star Crafts were airconditioned. The aircon vs. aircon fare difference of the competitors was actually not big but the speed difference and transit times were great.

Come the second decade of the new millennium Jadestar Shipping was obviously being squeezed by Lite Shipping and by Sea Highway Carrier (including its legal-fiction companies), the company of the Star Crafts fastcrafts. One disadvantage of a shipping company with only one route like Jadestar Shipping is there is no other route that can buoy up the company if squeezed in one route. The Island Shipping Corp. cruisers were also being squeezed in the route but that company has a strong presence in the Cebu-Bantayan island route.

By 2012, Jadestar Shipping was already kaput, a victim of declining patronage and of revenues not enough to sustain operations. They stopped sailing and brought their ships to the shipyards. The useless Jadestar Nueve and Jadestar Doce were also sold for scrap. Once in a while, some PSSS ship spotters would view them in Tayud using ultrazoom or superzoom cameras. The distance was far.

In 2013, a Jadestar was first espied in the PPA vessel arrival/departure site. It carried the name Jadestar Legacy. A check by a PSSS Admin proved she was Jadestar Seis (the name is etched in the hull) in practically the same livery. Only the name “Legacy” was added but she was now registered in Zamboanga. Further check showed the seats in the rear of the lower deck were removed so more cargo can be stowed. There is more amount of cargo in Zamboanga than in Bohol.

The ship is now owned by Ibnerizam Shipping and she is doing the Zamboanga-Isabela City, Basilan route, an even shorter route than the 22 nautical miles of Cebu-Tubigon at only 14 nautical miles. Her passenger load in the new route is stronger. She has a very old, salty captain who was too fearful of the owner who is always aboard. This is the only captain I met who is not appreciative of a ship spotter admiring his old smoky bathtub. The old cruiser is now down to 8 to 8.5 knots although at times she would take two hours on the route if the sea is rough or the sea is against her.

Meanwhile, while visiting Nagasaka Shipyard in Tayud, Cebu my fellow ship spotter from PSSS suddenly recognized a ship now in green livery being refitted and converted. I was not sure of the identification but he was certain. Then the engraved name came. Sure she was the Jadestar Tres and she was being converted into a Gemini ship, the Gemini 10 specifically. This company is known for having cargo ships that look like passenger-cargo cruisers. It is owned by Wellington Chan Lim of Isla de Bantayan Shipping.

In a few months, ship spotters began seeing her between Pier 2 and Pier 3 in Cebu near the Lapu-lapu Shipping ferries in the cruiser ship row of Cebu Port. There is wide vacant spaces in the upper and lower decks. She loads cargo in boxes and also day-old chicks, among other goods. She supposedly does a route to Masbate. Her schedule to Cebu is irregular and it cannot be predicted when she will appear there. Maybe she is also sails to the other islands and ports.

These sisters are now just the survivors of the Jadestar Shipping fleet which even had a cargo ship before, the Jadestar Dos. Somehow, it is heartwarming that they are still sailing and did not end up as plain scrap metal. 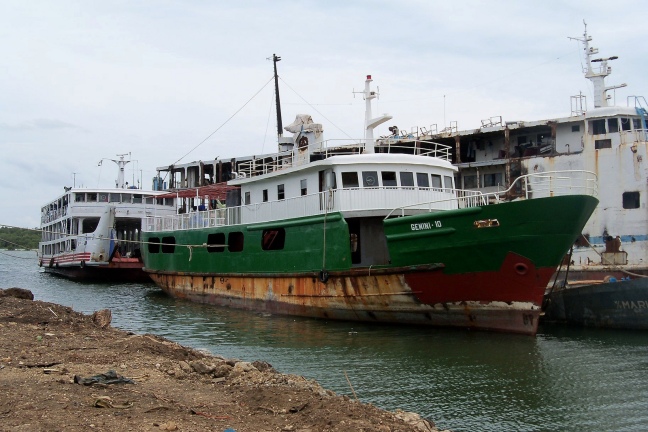 The Ever Sweet is a beautiful, sweet, little ferry that is a relic from the past (but of course I know the young ones will not agree with my description). This ship is probably the second-oldest cruiser ferry that is still sailing that is not an LCT. Ever Sweet and the oldest cruiser ferry extant, the Bounty Cruiser are incidentally both local-built which is a testament to the soundness of the design of local shipbuilders (Sandoval Shipyards has a lot of old ships, too, that are still sailing). The two were also both built in Zamboanga.

The Ever Sweet was built by the Varadero de Recodo in 1963 for Ever Lines, Inc. This ship is an overnight ferry-cruiser which means she is fitted with bunks. Her main route is to the Olutanga island and Payao, the municipality in Zamboanga mainland that is opposite Olutanga island.

One of the reason she still exists in the route is the poor security in the area. Although the road to Zamboanga City is mainly paved now night trips are still precluded and besides the main LCT connection of Olutanga goes to Alicia town which is farther.

By the way, these areas being mentioned are part of the province of Zamboanga Sibugay except for Zamboanga City and the city is the commercial lifeline of Olutanga and Payao. The better-off of Olutanga also send their children to study in Zamboanga City.

The Ever Sweet was built in Recodo, Zamboanga City and she is just a small ship at 36.3 meters length over-all, 33.3 meter length between perpendiculars by 5.9 meters beam with a depth of just 1.9 meters. Her dimensional measurements are just 135 in gross tonnage (GT)and 66 in net tonnage (NT).

The ship carries 252 passenger in a single Economy class in two decks. The ship is equipped by a small engine, a single 285hp Yanmar Marine diesel which propels her to a top speed of (gulp!) 8 knots! But that speed already guarantees a daybreak arrival in Olutanga and probably a good night’s sleep.

The ship has a steel hull with a raked stem and a transom stern (it was originally a cruiser stern). She has just one mast and a single side funnel and the bridge is above the passenger decks and ahead of the bridge is a forecastle. The ship has no cargo booms and cargo is just slid to the lower passenger from the wharf and it goes to the cargo hold. Sensitive or extra cargo is also stowed on the lower passenger deck which is a twin-purpose deck actually.

She does not sail three times a week in one direction except in peak seasons and sometimes it is just once a week. The trip will actually depend on the cargo and seasonality of goods and the demand also factors in. We heard with such flexibility she still manages to be profitable. Anyway, she has only one competitor in her route, a ship of Magnolia Shipping Corporation.

It is always a joy to see Ever Sweet in Zamboanga port which can only mean she is still healthy and sailing. Sentimentalists like me and Britz, the Zamboanga ship spotter do not really want old ships to go and we really prize them. Now, if only they can sail forever….