When the original shipping company Carlos A. Gothong & Company broke up in 1972, one of the successor companies was Carlos A. Gothong Lines Incorporated (CAGLI or Gothong Lines) owned by the scions of the founder Don Carlos A. Gothong. It was eclipsed early by Sulpicio Lines Incorporated which was owned by the once operations manager of the mother company. And then its operation and fleet even got smaller in 1980 when Lorenzo Shipping Corporation of Lorenzo Go and two other siblings went their separate way (this company was later sold to the Magsaysay Shipping Group but later the scions of Lorenzo Go founded the Oceanic Container Lines Incorporated which now has the biggest number of container ships in the country which has the “Ocean” series).

The rising company got absorbed when they acquiesced to the creation of big merged shipping company WG & A (which stood for William, Gothong and Aboitiz) in late 1995 and that included their small fleet of RORO Cargo ships and also their Visayas-Mindanao overnight ferries. In this merged company their main representative to the Board of Directors was Bob Gothong who was close to the Aboitizes and not the eldest Bowen Gothong. 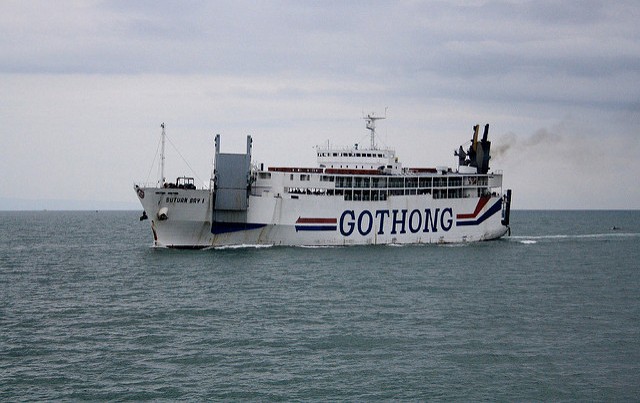 While Bob Gothong never veered from the Aboitiz orbit (take note it was Aboitiz Jebsens which was in charge of the operations fleet maintenance of WG & A), the other siblings of Bob Gothong were not satisfied with the state of things in the merged company and in 2001 they asked out and the process of divestment began. Even before the divestment was completed the revived Carlos A. Gothong Lines Incorporated already had the Butuan Bay 1 ready to sail the Manila-Cebu-Nasipit route which was considered lucky for them and where they were very strong in cargo historically. Instead of being paid in ships, the Gothong siblings were paid in cash (while Bob Gothong remained with WG&A) and for this to happen a lot of WG&A ships, both ROPAX and container ships had to be sold to China ship breakers for cash.

With the proceeds in the divestment that did not include Bob Gothong, the Gothong siblings led by Bowen Gothong acquired the big Manila Bay 1 and Subic Bay 1 in 2003 and 2004, respectively which were as big as their old Our Lady of Akita which burned in 2000 as the SuperFerry 6. The two was followed by the Ozamis Bay 1, also in 2004 and by the Cagayan Bay 1, the sister ship of SuperFerry 2 and SuperFerry 5, in 2007. At its peak the revived Carlos A. Gothong Lines Incorporated had a total of 5 ROPAXes (RORO-Passenger ships) plus a valuable wharf in the new reclaimed land in Mandaue adjacent the Cebu International Port or Cebu Pier 6. But though they had five ferries, the revived CAGLI was only able to regain a limited presence in the Visayas-Mindanao routes which were once dominated by them together with the Trans-Asia Shipping Lines Incorporated.

The revived Gothong Lines did not prove to be very successful. When they re-entered liner shipping, many passengers were already leaving the liners and they were going to the budget airlines and the intermodal buses using short-distance ferry-ROROs. Cargo was also shifting too to the intermodal system because of the high container rates and the hassles of hauling container vans to the Port of Manila from road congestion to criminality and to the rampant mulcting of the so-called “authorities”. In those years it seemed there was a surplus of bottoms which meant excess ships, a possible result of liberalization and incentives programs of President Fidel V. Ramos.

Gothong Lines then became notorious for late departures and arrivals because they gave preference to cargo which earns more than carrying passengers and they were actually never strong in the passenger department. Repeated complaints led the maritime authority MARINA (Maritime Industry Authority) to suspend their permit to carry passengers. With that happening Gothong Lines simply converted their ROPAXes into RORO Cargo ships just carrying container vans and vehicles.

With weakness in this business too, soon Cagayan Bay 1 and Ozamis Bay 1 soon found themselves laid up in the Gothong wharf in Mandaue and Butuan Bay 1 was sold after an engine explosion and it became the Trans-Asia 5 of Trans-Asia Shipping Lines Incorporated (TASLI). So in the recent years it was only Manila Bay 1 and Subic Bay 1 which were sailing for Gothong Lines and it seemed the two was enough for their limited cargo and routes. However, as RORO Cargo ships they were inefficient because of their big engines. But even then Gothong Lines were offering discounts and cheap rates in general which only showed how overpriced are container rates in the country. Recently, Cagayan Bay 1 and Ozamis Bay 1 were sold to the breakers but their hulls are still in the Gothong wharf in Mandaue as of the writing of this article.

Many speculated what will happen next to Gothong Lines with two inefficient and obsolescent ships and some were even asking if they will soon cease operations as their two ships were already clearly old and might even be too big for their routes. For me, I always look at their wharf which they retained and I know it is very valuable in terms of market value. Actually, the container shipping company established by their brother Bob Gothong, the Gothong Southern Shipping Lines Incorporated (GSSLI) does not even have an equivalent although it is the more progressive and booming company.

Recently, two RORO Cargo ships arrived in the Gothong wharf one after another and they were still relatively new by Philippine standards. These are the Panglao Bay 1 and the Dapitan Bay 1 and from the look of things they are the replacements of Subic Bay 1 and Manila Bay 1. Actually, some three months ago as of the writing of this article, the Subic Bay 1 was already pulled by tugs and it seems here destination is a ship breaker somewhere in South Asia. That happened when the Panglao Bay 1 was already sailing for them. It is speculated that the Manila Bay 1 will be disposed of when Dapitan Bay 1 will already be sailing. In reality, it is possible she already has a buyer now. 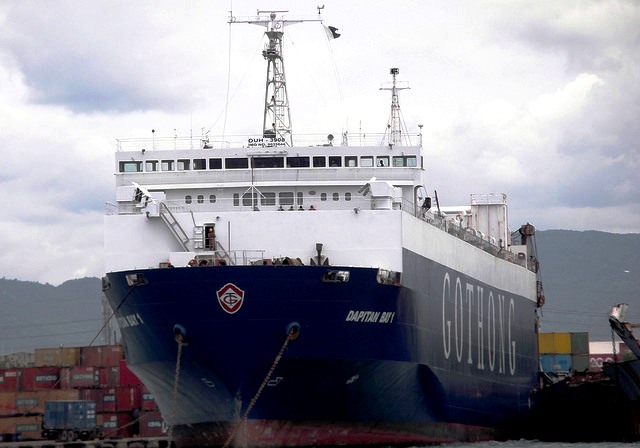 The Panglao Bay 1 was built in 1995 and her external dimensions are 128 meters by 22 meters with a Gross Tonnage (GT) of 5,930 in cubic volume and a cargo capacity of 4,946 tons in Deadweight Tonnage (DWT). Meanwhile, the Dapitan Bay 1 is officially a Vehicle Carrier and was built in 1992 and has the external dimensions 145 meters by 21 meters and has a cubic volume of 7,073 tons in GT and a DWT of 4,485 tons. This ship has different specifications depending on the maritime database. Whatever, these two ships are already the ships of Gothong Lines for the future and they look like worthy replacements for the Subic Bay 1 and Manila Bay 1 though they are a little smaller (but the engines are smaller too which is a plus). But then Gothong Lines might have already studied their cargo capacity needs and concluded that the sizes of the two fits them just right.

And so Carlos A. Gothong Lines Inc. is still fighting back. That is good news as they are the bearer of one of the most storied names in Philippine shipping history.