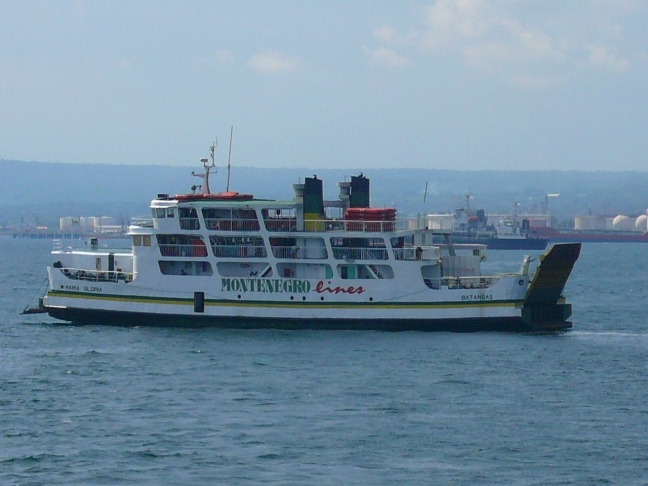 When Montenegro Shipping Lines Inc. (MSLI) started they were not operators of RORO ships. Instead they were operators of wooden motor boats which were called batel in the Southern Tagalog area. Their batel fleet then consisted of the MB Don Vicente, the MB Don Francisco and the MB Dona Matilde. The first might have been named for the patriarch and founder Vicente Montenegro. The Montenegro Lines batels were dedicated Batangas-Abra de Ilog ships which means that was their only route. However, normally only two of the three will be sailing the route on any given day. Abra de Ilog is the main entry in the north of the province of Occidental Mindoro up to now because it is the nearest to Batangas City, the gateway to the island of Mindoro.

Suddenly, on September 1994, a RORO ship arrived for Montenegro Lines without notice. This was the MV Maria Gloria, the first ever RORO (Roll-On, Roll Off) ship for Montenegro Lines. The ship was also fielded in the Batangas-Abra de Ilog route and at first it competed with their own batels which means one of them has to give up its schedule for MV Maria Gloria. When that ship arrived it was still the time of the complete dominance in Southern Tagalog of Viva Shipping Lines and its legal fiction companies and they were very jealous of any newcomer including in scheduling. This company used to bully their competition and underhanded tactics are routinely ascribed to them. In fact, they are simply feared and many of their wannabe competitors got bankrupted. So when MV Maria Gloria arrived and she was a RORO, the field Viva Shipping Line is very jealous of, there were questions in Batangas how long she would last.

The MV Maria Gloria started as the MV Tenyo Maru in Japan of the Shimabara Tetsudo (“tetsudo” translates to “railway”) and might have been used in the Shimabara Peninsula east of Nagasaki, Japan. This ferry was built by Kanda Shipbuilding Co. in their Kure yard in Japan in 1967 (so she is just short of one year before she turns “golden” or 50). A steel-hulled ship, she has only one mast with a raked stem and a transom stern. She has three RORO lanes in her car deck with an approximate length of 40 meters. The ship has about 400 lane-meters of rolling cargo space. That will be good for about six long trucks and buses at the sides if there is no obstruction and about eight or nine sedans in the middle. However, in loading, seldom is there an ideal combination of rolling cargo load.

The MV Maria Gloria is a two-class accommodation ship with an airconditioned Tourist accommodation at the front of the middle deck with benches. The rest of the passenger accommodations is open-air Economy. All the accommodations are just sitting as the MV Maria Gloria is just used on short-distance routes connecting the near islands. The total passenger capacity of the ship is 413 persons. Her original Gross Register Tonnage (GRT) in Japan was 356 tons but her Gross Tonnage (GT) went down to 267 in the Philippines even though scantlings at the bridge deck were added. The Net Tonnage (NT) is 104 locally and her loading capacity is 140 tons in Deadweight Tonnage (DWT). The ship’s Depth is 2.5 meters which is really not deep.

The MV Maria Gloria is equipped with two 6-cylinder Daihatsu marine diesels with a total of 1,400 horsepower which gives her a top speed of 11.5 knots. She has a normal complement of 24 and her local Call Sign is DUE 2090. Internationally, her permanent ID is IMO 6726668. Originally, in 1994, the ship’s registered owner was Jovanlyn Trading and General Merchandise, an outfit I have not heard of and she was the only ship of that unknown company. In 2000, her ownership was transferred to Montenegro Shipping Lines, Inc. (MSLI). Maybe at the start she was made to look as if she was only chartered.

Montenegro Lines has the long-time custom of rotating their ship assignments every few months or so. And so like here fleet mates, MV Maria Gloria has already been around, so to say, which means she has already run the gamut of the so-many routes of Montenegro Lines. The only routes she has not been to are the eastern seaboard routes of Montenegro Lines and their Iloilo-Palawan route. Most of the time she held Mindoro routes including her original Batangas-Abra de Ilog route. Lately, she is based in Dumaguete port and she is doing the Siquijor route for the company.

From what I heard, Montenegro Lines takes care well of this ship. That is a normal custom for first ships of a company. Of course, there is no connotation here that she is the “flagship” of the company.

With the easiness to change hull plates now and to acquire replacement engine room and bridge machinery, she seems to be destined for a lot more of life. That is also true for the main engine which can easily be replaced now even with brand-new ones like what were done for several ships of the Montenegro Lines fleet. It is really much easier to preserve an old ship now that to acquire an expensive brand-new one. So it seems the “related” Montenegro Lines and Starlite Ferries Inc. have different approaches.

A dozen years from now I expect MV Gloria will still be easily around and sailing. Montenegro Lines is one of the best locally in preserving old ships and it is not their wont to be included in the list of maritime hull losses (they only have one there in the last 22 years).