These are two sister ships with different owners, routes and home ports in the Philippines and probably their paths do not cross and few are aware one has a sister ship or ever more saw both of them. I wrote about them not because they are that superlative but I think they have some uniqueness and I would like to compare them to a sister ship series that has just started arriving in the Philippines. These are mainly represented by the new ships of Starlite Ferries which all arrived here brand-new from Japan from a big loan package and ostensibly a push for shipping modernization in the Philippines.

One thing I noticed about the new Starlite ferries is their breadth which is on the large or wide end. Few are the 60-meter ferries that have 14 meters as breadth (most have breadths just in the 12 to 13 meter range) but the breadth of the new Starlite Ferries is 15.3 meters. There are just a few ferries in the Philippines that are in the 60-meter class that have 14 meters in breadth but the sister ships Stephanie Marie and Starlite Annapolis have the widest breadth at 14.2 meters and so the new Starlite ferries has an extra 1.1 meters over them.

The car deck of Stephanie Marie (Photo by Mike Baylon)

Now if this extra breadth converts to an extra lane of rolling cargo I am not sure of that. The average width of a truck or bus is just 3 meters and so in the two older sisters ships that might mean 3 buses or trucks abreast as other portions of the breadth consist of the hull and pathways. At their breadth the buses and trucks will not be too near each other which is important in choppy seas to avoid damage.

But rolling cargo loading in the Philippines is generally mixed with smaller vehicles like sedans, AUVs, SUVs, jeeps and light trucks. Now I don’t know if in a mix the new Starlite ferries will have a higher total number of vehicles (the lengths of the two sets of sister ships are almost the same). In a maritime database the declared rolling cargo capacity of the new Starlite ferries is 21 trucks. I don’t know how this was computed. At 3 abreast then it must be a row of 7 trucks. But the LOA (Length Over-all) is only 67 meters. Is this the Japan 8-meter truck standard and not our long trucks?

I am also interested in the breadths of ROROs because that figure is also needed in estimating the rolling cargo and not just the length. A little extra breadth is actually crucial in packing it in. In the new Starlite ferries they advertised that their stairs are wider. Did the extra 1.1 meters just went into that?

Before the arrival of the new Starlite ferries, I looked at Stephanie Marie and Starlite Annapolis as the benchmarks in the 60-meter class of ROPAXes. Viewed from the outside it is obvious they are a little wide and their bow design even emphasizes that. Even from the stern these two sister ships looks wide than tall and to think they both have three passenger decks. Well, this illusion is true even from the bow.

Just how wide is the Stephanie Marie and Starlite Annapolis? Well, let me state that in many 80-meter ROROs 14 meters is the common breadth like in Reina del Rosario, Filipinas Cebu, Filipinas Ozamis, Filipinas Iligan and Filipinas Butuan (well, the last two is just a shade under 80 meters), to name a few more famous ferries. In fact the 14.2 meters breadth of Stephanie Marie and Starlite Annapolis are wider than most Cebu overnight ships. 14.2 meters is even the breadth of the 90-meter Super Shuttle RORO 2. Actually before the arrival of the former Cebu Ferries ships Starlite Annapolis has the biggest breadth in the Batangas to Mindoro and Roxas to Caticlan ROPAXes. But then those three former Cebu Ferries average over 90 meters in LOA and so they are substantially bigger than the sister ships and that is the reason why now those three are already regarded as liners.

Maybe in that count the two sister ships can be considered superlative. And that is also the characteristic of the new sister ship series of Starlite Ferries, their wide breadth. If that translates into a technical advantage I am not sure of that but probably not. Anyway she has bigger engines than most ships of her class at 3,650 horsepower.

The Stephanie Marie of Aleson Shipping of Zamboanga City came earlier than her sister in 1998. She was built as the Marima III in Japan and she has the ID IMO 8427278. This ship was built by Kanda Shipbuilding in Kawajiri, Japan in 1979 which means if 35-year old ships are phased out then she would have to go. She has two masts, a steel hull, cargo ramps at the bow and stern, a single car deck and three passenger decks.

Stephanie Marie‘s LOA is 63.2 meters with a Length Between Perpendiculars (LBP or LPP) of 60.9 meters. Her Gross Register Tonnage or GRT in Japan was 910 tons but when that was converted into Gross Tonnage or GT here, the modern measure, it fell to 770 even when an additional passenger accommodations were built. Most likely the “MARINA magic meter” came into play here which shrinks the GTs of the ships for considerations. Her declared Net Tonnage or NT is just 316 and that is probably an underestimation too.

The passenger capacity of Stephanie Marie is 956 and this is high because she is a short-distance ferry-RORO just equipped with benches and there are no bunks. She had a large air-conditioned cabin at the front of the ship for the Tourist Class and the very front is actually a lounge and at the side of that is a sort of an open office. Her route is Zamboanga City to Isabela City, the capital of Basilan which has a distance of 14 nautical miles and she does two full voyages a day. A big ship for the route she is seldom full and that gives the passengers a lot of space. But even then she is a profitable ship and there is space in case there is a rush of passengers and vehicles especially since she holds the last trip to Isabela City.

Meanwhile, her sister ship Starlite Annapolis of Starlite Ferries in Batangas City held the Roxas-Caticlan route for Starlite Ferries for a long time although she is rotated too in the Batangas-Calapan route. Those were not her original routes as when the ship first came here in 1999 her first owner was Safeship/Shipsafe, two legal-fiction shipping companies that just operate as one and she was known as Princess Colleen. Her original route was actually Batangas to Romblon, Romblon. However, when their ship Princess Camille capsized in Romblon port in 2003 the company went into a downward spiral and when she became defunct the Princess Colleen was sold to Starlite Ferries. Princess Colleen was the biggest ship of Safeship/Shipsafe. 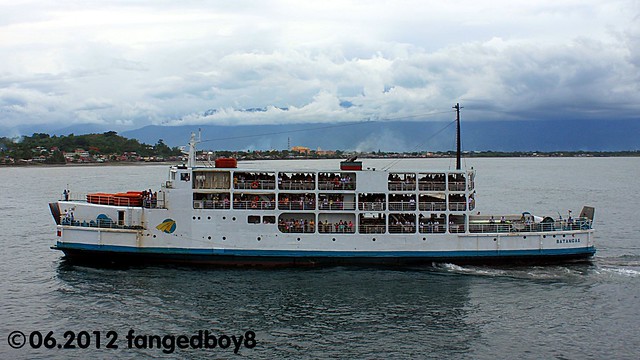 Princess Colleen was built as the Yoshinagawa of the Blue Line by Kanda Shipbuilding in Kure, Japan in 1982 and so she is the younger of the two sisters. Her permanent ID is IMO 8125624. She has the same external dimensions as the Stephanie Marie but her original Gross Register Tonnage was bigger at 946 tons. Unlike her sister, however, Starlite Annapolis reflected the increase in her passenger accommodations and so the declared GT here is 1,176 (GT is a dimentionless number hence “tons” is not used) which is nearer to reality. Like her sister ship, she is a three-passenger-deck ship. In the number of masts, hull material, cargo ramps and car deck, she is like her sister ship and visually it is obvious they are sister ships although the passenger deck lay-out of the two ships is a little different.

In the engine department both ships are equipped with two Daihatsu engines with a total of 3,200 horsepower which is a little high for ROROs their size (and may I note the engine room is too loud when cruising unlike the more modern ROPAXes). Maybe their owners in Japan wanted a little more speed and so their design speeds are both 15 knots which is higher than the design speed (the maximum that can be sustained) of the new Starlite ferries although its power is greater (is that the penalty of having a larger draft?). Of course after three decades of service there is no way the two sisters ships can still run near those speeds and they will be lucky to develop 13 knots now. They might be old, however, but the two are still reliable and profitable ships. I just worry about Starlite Annapolis because her owner is one of the bashers of old ships and he might just simply decide to retire her if he wants to be true to his words.

If there is no forced phasing-out of old ships unlike what is pushed by those who have vested interests, I am sure both these ships will last 40 years or more if the record of the ROROs older than them is studied when some examples are already 50 years now. That is one blessing of having Daihatsu engines which have proven to be very sturdy and long-lasting and parts are easy to source or to re-manufacture. Regarding the hull, I am sure its integrity is still good especially since anodes are in wide use now and it is easy to replace damaged hull plates.

I will still be watching these sister ships in the next few years for I am impressed with them.