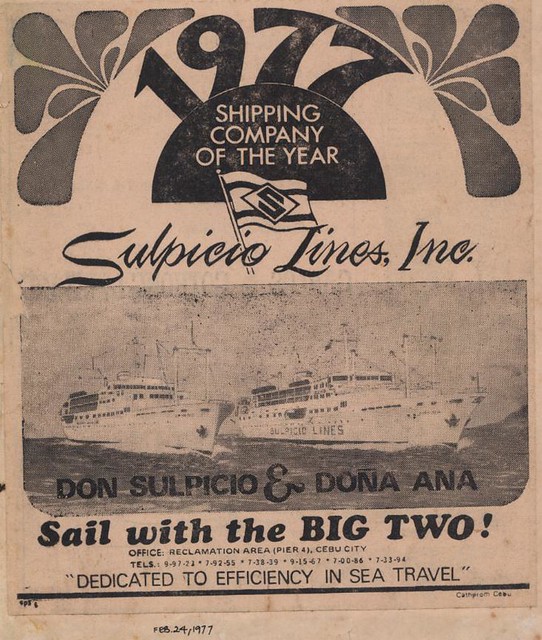 From the collection of John Uy Saulog

In the era of cruiser liners, not only did they get bigger but they also got faster. So they competed not only in amenities and passenger service but also in shorter cruising times and this was valuable not only in the far ports like Davao but also in the likes of Cebu and Cagayan de Oro. With fast cruisers, the travel time to the likes of Davao went down from three-and-a-half days to two-and-a-half days. It also brought down the cruising time to Cebu to less than a day.

The leading shipping company in the local routes Compania Maritima had been the first in fast cruisers with the fielding of “Filipinas” in the 1968 and the “Mindanao” in 1970. Both were capable of 18 knots and that was the reference speed then in that era to be considered “fast”. As expected, the two, one after the other. were fielded in the long Davao route.

William Lines followed suit from 1970 when they ordered the brand-new “Misamis Occidental” that was also capable of 18 knots. This was soon followed by the legendary “Cebu City” which was capable of 20.5 knots and this was assigned to the premier Manila-Cebu route. William Lines then followed up with four more fast cruiser liners and they had the biggest number of ships in that category. William Lines fielded their 20.5-knot “Manila City” to the Davao route.

Sweet Lines did not really have a fast cruiser except for the first “Sweet Faith” which they fielded in the prime Manila-Cebu route in a fierce competition with William’s “Cebu City”. This liner which arrived from Denmark in 1970 was capable of 20 knots. She had the pair “Sweet Home” (the first) which came in 1973 from Europe too. Sweet Lines dubbed the two as the “Inimitable Pair”. To be able to compete in the long Davao route, what Sweet Lines did was to use the shorter eastern seaboard on the route to Davao. With this tactic, they were also “fast”, so to say.

Negros Navigation also had their share with fast cruiser liners with the “Dona Florentina” and the beautiful “Don Julio”. This was capped by their fastest cruiser then, the “Don Juan” which was capable of 19 knots. A later ship, the “Don Claudio” was also fast at 18.5 knots when she was still in Japan. May I note that the Negros Navigation cruiser liners were not really in direct competition with their counterparts as they were just then in the Western Visayas routes.

The fragments of the Go Thong empire was late in fast cruiser liner segment. Maybe they needed to take stock and consolidate after their split in 1972. Sulpicio Lines entered the fast cruiser liner category just in 1975, the last among the majors which competed in this field. It has to be noted that Carlos A. Gothong Lines and Lorenzo Shipping did not follow in this category and neither did Aboitiz Shipping and Escano Lines. Only Compania Maritima, William Lines, Sweet Lines, Negros Navigation and Sulpicio Lines participated in this competition but actually Compania Maritima did not acquire any more liners, fast or not, after acquiring “Mindanao” in 1970 even though they had many hull losses in the succeeding years. 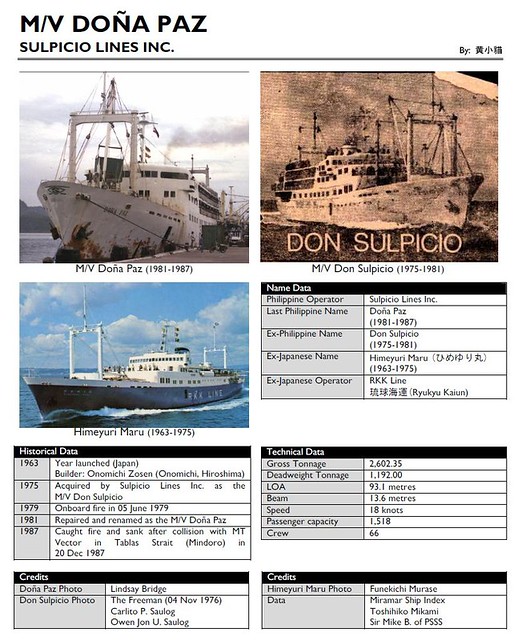 Sulpicio Lines acquired the “Himeyuri Maru” from Ryukyu Kaiun KK, more famously known as RKK Line in 1975. This ship was built by Onomichi Zosen in Onomichi yard in Japan in 1963. She measured 93.1 meters by 13.6 meters and her cubic volume was 2,602 gross tons. She was powered by a single Niigata engine of 5,500 horsepower and her top speed was 18 knots. Refitted in the Philippines she had a passenger capacity of 1,424. She was given the name “Don Sulpicio” in honor of the founder and she became the flagship of Sulpicio Lines (this was the second ship to carry that name in the fleet). In 1981, after a fire and refitting she was renamed the “Dona Paz”, the second to carry that name in the Sulpicio Lines fleet (the first was an ex-FS ship). A fine ship, she was unfortunately associated with great ignominy later.

In 1976, Sulpicio Lines acquired the sister ship of “Himeyuri Maru” from RKK Lines too, the “Otohime Maru” which was also built by Onomichi Zosen in the same yard in Onomichi, Japan three years later in 1966. She had the same Niigata powerplant of 5,500 horsepower. However, she was rated at 19.5 knots. She was 97.6 meters in length, 13.7 meters in breadth with a cubic volume of 2,991 gross tons. This ship was renamed to “Dona Ana” and together with “Don Sulpicio”, Sulpicio Lines called them the “Big Two”. They were used by Sulpicio Lines in fighting for their stake in the primary Manila-Cebu route. Later, they extended the route of “Dona Ana” to Davao. In 1980, “Dona Ana” was renamed to “Dona Marilyn”. She held the Manila-Iloilo-Zamboanga-Cotabato route of Sulpicio Lines until she was reassigned the Manila-Catbalogan-Tacloban route with the arrival of the “Cotabato Princess”. She held that route until her end.

In 1978, as Sulpicio Lines grew stronger, they acquired from RKK Lines again not one but two ships which were actually sister ships too but bigger than the earlier pair from Ryukyu Kaiun KK. These were the “Tokyo Maru” and the “Okinawa Maru” and again both were built by Onomichi Zosen in Onomichi yard in Japan. The first ship was built in 1969 and the second one was built in 1973. The “Tokyo Maru” had dimensions of 112.2 meters by 15.2 meters and she had cubic measurement of 3,510 gross tons. She was powered by a single Hitachi-B&W engine of 6,150 horsepower which gave her a top speed of 18.5 knots. “Okinawa Maru” measured 111.5 meters by 15.2 meters with a cubic volume of 3,800 gross tons. Her engine was a single Mitsubishi-MAN of 7,600 horsepower which gave her a top speed of 19 knots. Incidentally this engine also powered “Cotabato Princess”, “Nasipit Princess”, “SuperFerry 2”, “SuperFerry 5” and “Cagayan Bay 1”.

Dipolog Princess and Princess of the Caribbean

“Tokyo Maru” was renamed to “Don Eusebio” and “Okinawa Maru” was renamed to “Don Enrique”. When the “Princesses” came into the nomenclature of Sulpicio Lines she became the “Davao Princess” in 1987 because she was actually the Davao specialist. Later, she was renamed to “Iloilo Princess” when she was no longer holding that route (“Filipina Princess” supplanted her in 1993). Her local passenger capacity, as refitted was 1,379. Meanwhile, “Don Eusebio” was renamed to “Dipolog Princess”. She was then sailing the Manila-Dumaguete-Dipolog-Cagayan de Oro-Ozamis route. However, she was not actually calling in Dipolog but in Dapitan port. In her refitting here, her passenger capacity increased to 1,261. Later, she held the Manila-Tagbilaran-Dipolog-Iligan-Cebu route of the company until she was stopped from sailing.

The fifth and last cruiser Sulpicio Lines acquired in this period was the “Naha Maru” which also from RKK Line and she came in 1981. She was bigger than the earlier ships from RKK Line. The ship was built by Onomichi Zosen (again!) in Onomichi yard in Japan in 1972. She measured 130.9 meters by 16.8 meters and she had a cubic measurement of 4,957 gross tons. She was powered by a single Hitachi-B&W engine of 9,200 horsepower, the same type powering “Dipolog Princess” but with more cylinders. She had top speed of 20 knots when new. She was called as the “Philippine Princess” and she became the Sulpicio Lines flagship which means she held the Manila-Cebu route. For a long time, she and the William Lines’ flagship “Dona Virginia” fought in that route. Refitted here, she had a passenger capacity of 1,633.

As a footnote, much later, when cruiser liners were no longer in vogue, Sulpicio Lines acquired another fast cruiser liner. This was the “Ogasawara Maru” of Tokai Kisen which was built by Mitsubishi Heavy Industries in Shimonoseki, Japan in 1979. She measured 110.5 meters by 15.2 meters and 3,553 gross tons. She was powered by two Mitsubishi engines totalling 11,600 horsepower and her top speed when new was 20.5 knots. She was known as the “Princess of the Caribbean” here and she came in 1997.

Like the William Lines fast cruiser liners, many of these Sulpicio fast cruiser liners also met grim fates (but in general they lasted longer and that is why the PSSS — Philippine Ship Spotters Society have still photos of them). Everybody knows the fate of “Dona Paz” which collided with a tanker in Tablas Strait on December 20, 1987 that resulted in great loss of lives.

The “Dona Marilyn”, meanwhile, foundered in a typhoon off Biliran on October 24, 1988 on her way to Tacloban from Manila. The “Philippine Princess” was hit by fire while refitting in Cebu on December 5, 1997. She was towed to Manila where she was broken up. The “Iloilo Princess” was hit by another fire while also refitting in Cebu on July 4, 2003. She capsized in port and she was broken up, too.

The “Dipolog Princess” was the only survivor of the five. She was among the Sulpicio Lines ships suspended as a consequence of the capsizing of the “Princess of the Stars” in a typhoon in June of 2008. She never sailed again and she was just anchored in Mactan Channel and later moored at the Sulpicio wharf in Pier 7 in Mandaue, Cebu. Together with the “Princess of the Caribbean” she was sold to China breakers and she was demolished in Xinhui, China by Jiangmen Yinhu Ship Breaking Company on January 2011.

Now, even Sulpicio Lines is no more.