At the turn of the millennium, my parents were already getting old and with it came the inevitable sicknesses. I began visiting Bicol through the intermodal route from Davao. The reasons were varied. One, I found out that it cost only half compared to a trip via Manila. Second, I don’t have mall eyes and it is the countryside view that I enjoy. I even hate more the always-present clouds in a plane trip. Third, I don’t enjoy battling the hassles of Manila. Fourth, I want to learn new places and I am also a fan of buses. Lastly but not least, I am a ship spotter and I wanted to learn more about the ferries of the eastern seaboard.

The trips were exacting but I was younger and more eager then. I was not daunted that I don’t know the route well. By that time, I have began to give up on the Philtranco direct bus that I didn’t like. Honestly, as a Bicolano I was not a fan of the bus company as it has failed and abused Bicol for so long. Second, I do not want the long lost hours in the hot ports waiting for the ferries of Archipelago Philippine Ferries, their sister company when one is already tired (Philtranco is tied to the ferries of Archipelago). Sometimes, the bus waits for up to 5 hours for them. Third, in peak season it can be a battle for seats in Naga and then one had to wait for hours for the bus.

Since I was a lifelong traveler, I decided to experiment by using Manila buses to and from Leyte plus the Surigao ride I already knew. At times I ride some local buses, commuter vans and jeeps like those in Bicol, Samar and Leyte. What a fun it is to ride the ugly-looking Samar Bus Lines buses in the bumpy roads of Samar! Or the kamikaze buses to Sogod that freewheel the descents from Agas-agas. And riding the faster Tacloban van to Allen to catch the last St. Christopher bus in Allen, a rotten bus most of the time but they were the ones that specialized then on the “stragglers”, the passengers left by the last Manila bus from Tacloban.

Those early trips that rely on connections were trials and errors. Early, I didn’t know the windows of the trips in each places (what hour is the first trip and what hour is the last trip). That was when I am forced to stay overnight in dark bus terminals like in Tacloban or even the plaza in Maasin or even wait alone in a waiting shed near midnight in Sogod junction with only mosquitoes for companions. Sometimes, having eateries open at night in a junction was already heaven like in Buray. If I know the schedules well now and the window hours of the trips is because I have learned from the mistakes of my trials and errors in the past.

In the process of all these, I grasped how lousy and how few were the ferry connections then across Surigao Strait. And I learned that in one mistake or one unfavorable bus or jeep connection might mean an 11-hour wait in Liloan port (once what made us miss the ship was a near-fistfight between our driver and another driver!). Or suffer long waits in Lipata port because the ferry was not running. And after all the hours of waiting then not being able to get a seat because the ferry was over its capacity. Lucky then if one will have an air vent for a seat as the stairs were just too dirty. Sometimes I vowed I will bring a carton or a newspaper so I can sit on the deck at the top of the ship.

It was much better in San Bernardino Strait as there were more ferries there and not once I encounter a ferry that there that was overloaded. Even if it was, it will not be a problem since usually I don’t sit in a Matnog-Allen ferry at day. I just roam around the ship and see the outside view if there is light since the ferry there normally took only 1 hour and 10 minutes to cross. Just milling around is difficult in the Liloan-Lipata route because the ferries there took at least three-and-a-half hours to cross.

The trip going north for me was much better and less tiring because I know when the bus will be leaving the terminal and so I don’t waste time and effort needlessly. In Naga, it was much difficult since one can’t predict the exact arrival of the bus from Manila (and sometime they were delayed if it is rainy or there was some kind of road obstruction or traffic). When it rains it was much more difficult especially since flagging a Manila bus to Visayas was very hard since one can’t immediately read the signboard (it is not lighted). Moreover, Visayas buses were hesitant to stop for one or two solitary passengers which they think might just be destined a few towns away (and this has consequences).

Well, Visayas buses are not so kind to passengers in Bicol because Bicol bus operators tell them not to take passengers bound for Bicol (when they legally can and anyway Bicol buses ply routes to the Visayas) and if they do they are stoned. There were stretches in Bicol where the driver/conductor will tell the passengers to deploy the shades (these are curtains actually) to avert injury should a stone hit the bus. That is the reason why riding a Visayan bus I don’t speak Bicol nor do I introduce myself as a Bicolano (I say I am a Tagalog which is also true and I will speak Tagalog with the accent of my parents).

One of the trips I remember well was a southbound trip where I started it too tired and very much lacking in sleep plus I was out of sorts. My brother gave me extra money for a plane trip but on the last minute I decided against it and I took the bus from Naga. My trip started at night as usual (because there are no buses from Manila passing Naga to the Visayas during the day). I can’t remember my bus now but we reached Matnog uneventfully sometime midnight and we reached Tacloban about midmorning.

Usually, if I had a direct Naga-Tacloban bus I will get off in Tacloban and look for a connecting ride to Liloan. I usually do that since it is very hard to time a Liloan or Davao bus from Manila in Naga. I know that in Tacloban there will always be vans for Liloan but these were not many then. So, if there is a Sogod bus leaving immediately I might take a chance on it since van waiting times to fill can take two hours or more then. Or else take the more frequent Hinundayan van and get off at Himayangan junction and take a habal-habal to Liloan.

I reached Liloan in time for the new-fielded Super Shuttle Ferry 10 of Asian Marine Transport Corporation (AMTC) which was then the best ship in the Liloan-Lipata route. Before boarding and in the bus trip maybe I was not looking too much at myself and I was just preoccupied in gazing the views and in trying to find sleep and peace. 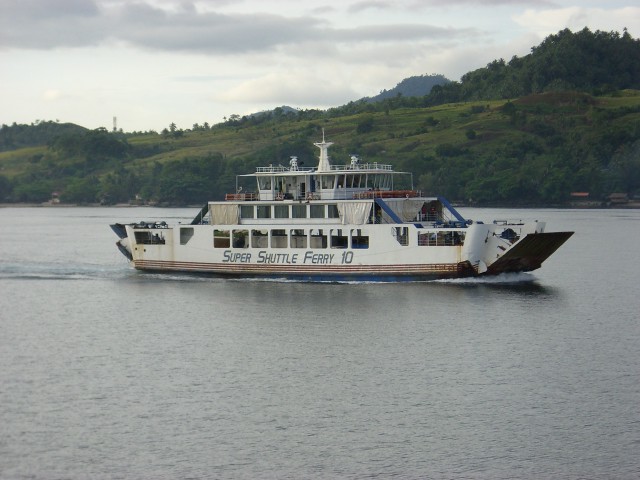 The crew of Super Shuttle Ferry 10 was welcoming unlike the crews of their competitors which nary had time for passengers and treats them like cattle. If one needs anything from them one still has to look for a crewman. Maybe since they are too used to then with overcrowded ferries they would just rather disappear and also to avoid complaints about the congestion and the dirtiness (one can’t see anyone of them take the mop to clean the muddy deck when it is rainy). Or to try to find a seat for passengers unable to find one. Or assist the elderly and pregnant.

I was looking for a seat among the lounge seats of Super Shuttle Ferry 10 in the Tourist section where I can have the chance of a semi-lying position to sleep when a crewman approached me. “Sir, would you like to take a bath?” I was dumbfounded and astounded. Never in my hundreds of trips aboard ferries have I ever heard such a question. He offered a lounge seat and placed my knapsack there and said to the passengers around, “Let Sir have this seat so he can lie and sleep.” I was doubly astounded. And he nodded to the crewman in charge of checking the Tourist tickets at the door as if to say “reserve this seat for him, don’t let others take it”. And that angel of a crewman led me to a bath in the middle of the Tourist section and guarded it so there will be no intrusion. The bathroom was clean and so was the water. It was one of the most refreshing baths I ever had.

The crewman led me back to the seat after my bath (I was actually a little numb and so I welcomed the assistance) and said to the effect that “please no one disturb him”. In an instant I was deeply asleep and only a gentle nudge woke me as we were docking in Lipata. I softly thanked the two crewmen and it was thanks from the bottom of my heart. Soon I was looking for a connecting bus to Davao.

Can grief and distress be read in a person? Maybe I was not aware of this before because growing up in a region where we have no relatives, we don’t attend burials. Actually, once when my wife was confined in a hospital I was froze when an employee burst into tears wailing, “Wala na si Sir”. I grew up not witnessing such things or taking care of patients in hospitals when they were already terminally sick.

The TB of SSF10 on the right

Until now I can only thank from the bottom of my heart that crewman of Super Shuttle Ferry 10 who assisted me and showed me all kindness and assistance I needed then. The trip I was making then happened after the death of my mother.

Was he really able read me? Was there some angel whispering in his ears? Did a senior officer noticed me and gave instructions? I don’t know, I don’t have the answers.

Super Shuttle Ferry 10 was soon replaced in the Liloan-Lipata route and I never rode her again. But in one ship spotting session of PSSS (Philippine Ship Spotters Society), we were able to board her in Mandaue Pier 8, the AMTC wharf. Yes, the lounge seat where I lain was still there. The only change was it was already re-upholstered.

I had goose bumps looking at that seat and at the same time my heart was pounding. I tried to look at the faces of the crew. My angel was no longer there. But whatever, this article is my way of saying thanks to you again. From my heart, I wish you reach far in your career.