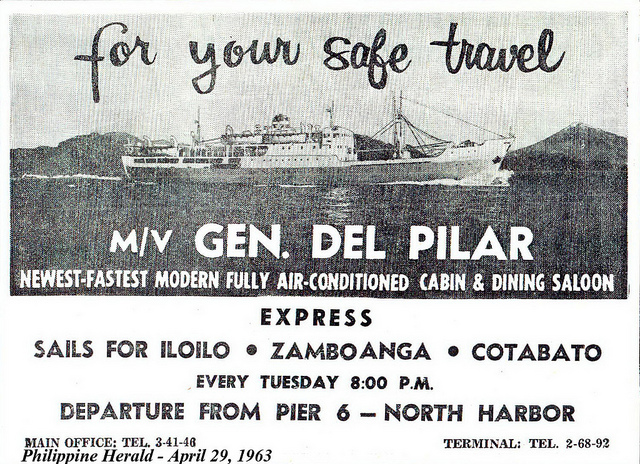 The years 1965 and 1966 witnessed key developments and shifts in Philippine shipping. In those two years, two liner companies quit the local passenger liner shipping scene. These are the General Shipping Company and the Southern Lines Incorporated which both started right after the end of World War II when the US began transferring to us war-surplus ship. Thus the fleet of General Shipping Corporation and Southern Lines Incorporated consisted mainly of converted ex-“FS” ships. General Shipping, however, has two local-built luxury liners, the General Roxas and the General del Pilar. Southern Lines, meanwhile has one local-built luxury liner, the Governor B. Lopez plus the Don Julio from Ledesma Shipping Lines which was an ex-”FS” ship refitted to have luxury accommodations and was fast as she had former submarine engines. The rest of the fleet of the two shipping companies were run-of-the-mill passenger-cargo ships of the time except that Southern Lines had a significant number of the smaller ex-“F” ships in their regional routes. 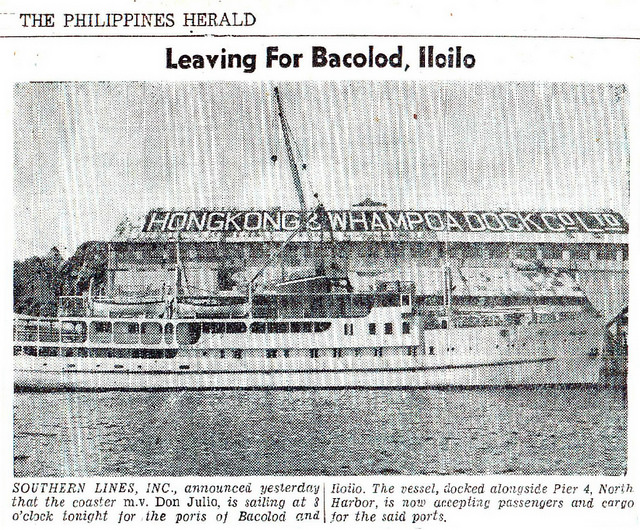 General Shipping had a fleet of a dozen liners and it had routes to all over the Visayas but it barely touched Cebu and Mindanao. Meanwhile, Southern Lines’ routes were mainly concentrated in Western Visayas and Romblon. It was the “Negros Navigation” of that region during that time, in effect, because Negros Navigation was just practically a regional operation then and they began as a postwar liner company when Southern Lines went out of the liner shipping scene. The fleet of Southern Lines was just as big as General Shipping but as said earlier a significant number of it was in the regional routes and those were mostly former “F” ships that were a little small for liner use unless lengthened like what was done by Carlos A. Gothong & Co. and others.

How did the national shipping scene stack up in those years? Well, in 1966, there was a near-parity between Compania Maritima, Philippine Steamship & Navigation Company (PSNC) and Carlos A. Gothong & Co. in the inter-island routes. Let me clarify that not counted here were their ships in the international routes. In ranking the shipping companies, Compania Maritima was a little ahead with Philippine Steamship & Navigation Company coming in second and Carlos A. Gothong & Co. trailing in on third. They were the first pack, so to speak as the fleet of the other liner shipping companies were a significantly behind them. If a fourth place will be awarded it will actually go to General Shipping Company. And a fifth place will have to be claimed by William Lines Inc.. This reckoning considers not only the number of ships but also the sizes of the ships as well as if the company has a luxury liner.

In the sell-offs of the liners, Aboitiz Shipping Corporation got nearly half of the fleet of General Shipping (and the other half went to Sweet Lines Incorporated). Though Aboitiz Shipping had a start way back in 1907 to support their abaca trade in the pre-World War II period, they were in a merger with Escano Lines in La Naviera shipping company before the war. Then after World War II, they were in a partnership with Everett Steamship in Philippine Steamship & Navigation Company and had no independent operations. [And so it seems when they proposed a merger with William Lines Incorporated and Carlos A. Gothong Lines Incorporated for a merger in 1995, it seems they were simply going back to their old habit?] 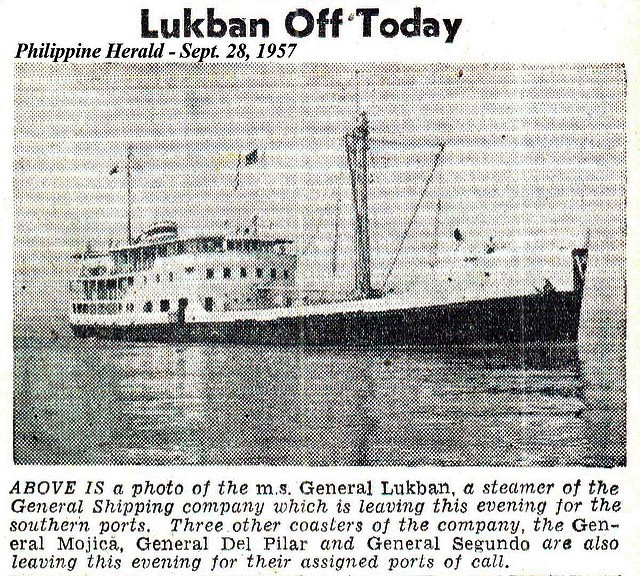 With the purchase of ships and franchises from General Shipping, Aboitiz Shipping was reborn with an independent operation in 1966. And besides that, a little later, they were also able to establish the Cebu-Bohol Ferry Company (CBFC), a shipping company that has no Bohol port of call from Manila but has regional operations. To bolster their fleet, Aboitiz Shipping also purchased two ex-”FS” ships from Philippine Steamship & Navigation Company (PSNC), the Baztan and FS-165. Maybe the two belonged to them anyway as part of their partnership with PSNC. As clarification, the ships acquired from General Shipping did not immediately begin sailing as those were lengthened first locally and refitted. Lengthening of former “FS” ships was a common practice in the 1960’s.

Sweet Lines Incorporated of Bohol, which was formerly a big regional shipping company in Central Visayas, Eastern Visayas and Northern Mindanao was able to acquire the same number of ships as Aboitiz Shipping from General Shipping Corporation. With the franchises that went along with the ships, Sweet Lines was able to open routes to Manila and for the first time they became a liner shipping company. Meanwhile, General Shipping Company swapped their luxury liner General del Pilar for an ex-“C1-M-AV1” ship Compania Maritima, the Mactan to use it in their international routes. Sweet Lines, however, was able to acquire one of the luxury liners of General Shipping, the General Roxas which became the Sweet Rose. That was the total picture now of how the local fleet of General Shipping Corporation was cut up after it quit the local shipping scene. 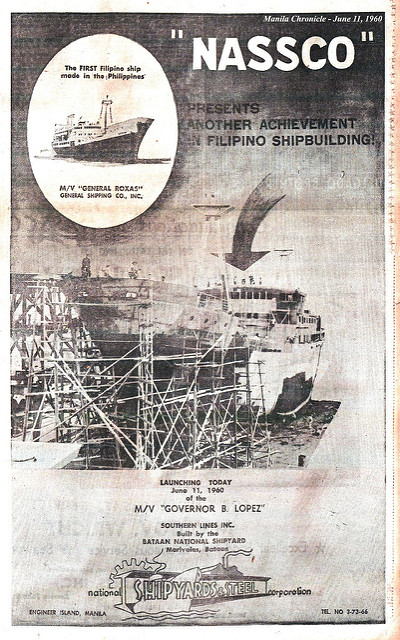 For a very short time Compania Maritima and PSNC+Aboitiz Shipping Comp.+Cebu-Bohol Ferry Company was ahead from the others. However it was very short lived since Carlos A. Gothong & Co.’s surplus ships from Europe began arriving in greater numbers starting in the mid-1960’s. William Lines likewise copied that model and also began purchasing surplus ships from Europe to be converted into liners here. Actually PSNC+Aboitiz Shipping Comp.+Cebu-Bohol Ferry Comp.’s share of the lead was tenuous as most of their fleet consisted of war-surplus ships from the US that were beginning to get old and are more prone to accidents. Meanwhile, from 1967 the “suicide” of Compania Maritima’s ships began.