In the late 1960’s, the “Bypasses of the Sea” came into existence in Japan. These were long-distance ROROs (actually ROPAXes) meant to bypass the crowded roads of Japan which was experiencing a sustained economic boom then in what was called the “Japan Miracle” which brought the former war-defeated and occupied country into the forefront of the ranks of nations (Number 2 in fact later). These “Bypasses of the Sea” were workmanlike and were primarily geared to the trucks and its crews and also to passengers in average comfort. Some of these ROROs actually came to the Philippines when they were retired in Japan like the Filipina Princess, the Princess of Paradise, the Princess of the World, the Manila Bay 1, the Subic Bay 1 and the Mary Queen of Peace.

In the next decade, aside from the “Bypasses of the Sea”, a new class of ROROs came into existence in Japan. These were bigger and much more comfortable with hotel-like facilities. These were later dubbed as “cruiseferries”, a portmanteau. These were like cruise ships in comfort and service but as the same time these were still “Bypasses of the Sea”. As “cruiseferries”, these were more geared to attract passengers but these still had the car decks for the trucks and sedans. The “cruiseferries” being faster that most ROROs can travel more distances and longer routes and can cover most of their routes in a night or so, in great comfort. “Sanfurawaa” or the series of Sunflower ships were the leader in this new class and three of their ships eventually went to the Philippines after their retirement. They were known as Princess of the Orient, Mabuhay 1 and Princess of Unity in our waters.

The “cruiseferry” class did not last long, however. In the 1980’s, Japan were no longer building them as passengers were already preferring other modes of transport like the budget planes and the now-ubiquitous “Bullet” trains. The Japan shipping companies scaled back in comfort and began dedicating two decks of the ship to rolling cargo. However, there was still enough comfort for those who seek them although it was no longer as opulent as the “cruiseferries”. Dormitories and second-class cabins were the dominant passenger classes now. These class of ships were called the “carferries” and some of these also reached the Philippines when they were retired in Japan. They were known here as the SuperFerry 12, SuperFerry 15, SuperFerry 16, SuperFerry 17, SuperFerry 18, SuperFerry 20, SuperFerry 21, Princess of the Universe, St. Michael The Archangel and St. Francis Xavier.

There are also other Japan companies which ventured into “cruiseferries”. One of these is the Sanpo Kaiun K.K. which is just a small company. It acquired the White Sanpo 2 in 1981 and she was relatively big compared to their previous ships. This ship was well-appointed it qualified into a “cruiseferry” class albeit a little smaller than the other Japan “cruiseferries”. Her route was Kobe-Imabari-Matsuyama. The year she was acquired, Japan shipping companies were still acquiring “cruiseferries”. It will be just be a little later that the “cruiseferries” will be supplanted by the “carferries”.

In 2000, White Sanpo 2 came to the Philippines after 19 years of service in Japan and she became the SuperFerry 14 of William, Gothong and Aboitiz or WG&A. This was the first ferry not originally ordered by the partners which means it was already the merged company which acquired her. She was also the last Japan “cruiseferry” that came here. Passengers were asking why the later big ferries from Japan were no longer as luxurious. The reason was it was already “carferries” that were coming and no longer “cruiseferries”. Actually, the presence of two car decks is the giveaway the ship that came is a “carferry”.

The White Sanpo 2 or SuperFerry 14 was actually 155.6 meters by 23.6 meters in dimension with a depth of 13.0 meters. Her gross tonnage (GT) was 10,181 meters in Japan and 10,192 meters in the Philippines. The reason for the almost identical GT was her superstructure here was no longer modified and no decks were added. She was one of the early big liners here where the superstructure was left untouched and the passenger capacity was not maximized. Others like her in this treatment were the Mabuhay 1 or SuperFerry 10 and the Princess of New Unity. For her bigness, SuperFerry 14 only had a passenger capacity of 1,757. Other liners of her length and in her time had passenger capacities of well over 2,000 persons. Her net tonnage (NT) was 4,957.

The White Sanpo 2, the future SuperFerry 14 was built by Hayashikane Shipbuilding and Engineering Company Ltd. in their Shimonoseki yard in Japan in 1981. She has three passenger decks and a single car deck which was accessible by ramps at the bow and the stern. Her design and lines were pretty much traditional of her period. The ship has a semi-bulbous stem and a transom stern and powered by two main engines, all of which were standard in the design of her era. Her permanent ID was IMO 8004210.

Her speed was also par for the course for the big liners then of 150 meters length in the Philippines except for those that didn’t look sleek enough (like the Manila Bay 1 and SuperFerry 6 which looked fat and were not capable of 20 knots here). Since her design speed in Japan was 21 knots, she was still capable of 20 knots here especially since not much metal was added because no decks were added to her. That speed came from a pair of SEMT-Pielstick engines that developed 23,400 horsepower.

As a former “cruiseferry”, SuperFerry 14 had luxurious interiors and accommodations many of which were simply carried over from her Japan features. Since WG&A had many good ships already in the Cebu and Iloilo routes, she was then used by the company to compete with the Negros Navigation ships in the Manila-Bacolod-Cagayan de Oro route. Bacolod was once closed to other shipping companies except for Negros Navigation since they operate privately the only suitable port for big liners then, the Banago port. With the opening of the BREDCO port, WG&A challenged in the Manila-Bacolod-Cagayan de Oro route and SuperFerry 14 was more than a match to the Mary The Queen and the St. Joseph The Worker of NENACO in the Cagayan de Oro route. 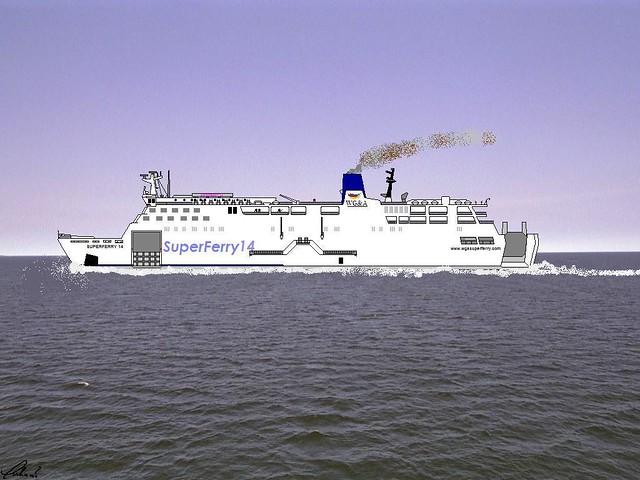 A drawing by Ken Ledesma

The SuperFerry 14 did not sail long, however. On the night of February 27, 2004, a bomb exploded in a Tourist section on a lower deck of the ship an hour and a half after leaving Manila North Harbor when the ship was at the mouth of Manila Bay. The explosion triggered a fire which soon engulfed the whole ship. The firefighting crew of the ship was overwhelmed and the rescue was chaotic. Some passengers simply jumped into the dark sea and some were feared drowned in the aftermath. To think, it was even fortunate that the incident happened in waters near where rescue ships can reach the ship fast.

Rescuers including tugs and a helicopter tried to douse the fire consuming the ship and eventually the fire was controlled. The ship was towed to Bataan even while burning as capsizing will mean a greater loss. On shore, the vessel capsized but she was righted and search and rescue operations continued. With the vessel afloat, rescuers were able to comb the ship and probers investigated the cause of the fire. There was really a blast site that looked like it came from a bomb. The claims of the crew of a bomb exploding was validated.

Although the Abu Sayyaf Group immediately claimed responsibility for the firebombing, the government of Gloria Macapagal Arroyo initially dismissed a terrorist attack and instead blamed it on some sort of an accident (the government of Gloria Macapagal Arroyo had the habit of denying terrorist attacks until conclusively proven). But later when suspects from the Rajah Solaiman Movement affiliated with the Abu Sayyaf were captured and admitted what happened to SuperFerry 14, the government changed tune and admitted that what brought the ferry down was really a bomb placed inside a TV set.

Whatever and later, the estimate was some 63 people died and about 53 were missing in the incident for a total body count of about 116. That figure does not include the wounded. Some of the casualties were bright students from an elite school, the MSU-IIT-IDS of Iligan City in Lanao and that included the second-ranking student of the graduating class (she was later given a posthumous joint Salutatorian award by the school).

Photo from The 4Freedoms Library

SuperFerry 14 never sailed again as her condition is BER (Beyond Economic Repair). In databases, she is marked as CTL (Complete Total Loss). There were pictures of her where the fire was even consuming the bridge of the ship. Besides, passengers don’t want to ride a ship where there was a lot of dead in a previous accident.

A very fine ship but SuperFerry 14 was really unfortunate.