Carlos A. Gothong Lines, Inc. (CAGLI), in their online published history claims they were first into ROROs. The more correct term is probably ROPAX or RORO-Passenger but many people just use the acronym “RORO” and that is what is commonly most understood by many. It was said that when new patriarch Alfredo (Alfred) Gothong went on self-imposed exile in Canada, he was able to observe how efficient were the ROROs there and he might have been talking of the short-distance ferry-ROROs including the double-ended ferries in the Vancouver area. It is in that area where Canada has many of those types.

The move to ROROs happened when the then-combined shipping companies Carlos A. Gothong Lines, Inc. (CAGLI) and Lorenzo Shipping Corporation parted ways in 1979 (in actual although the agreement was from 1978) after some 7 years of combined operations which they did to better withstand the shocks of the split that created Sulpicio Lines and the downfall of their copra and oil trading (in strategic partnership with Ludo Do & Lu Ym of Cebu) when the Marcos henchmen moved in into the copra trade and oil refining. When Carlos A. Gothong Lines and Lorenzo Shipping were still combined the former’s ships were mainly doing the Visayas and Visayas-Mindanao routes while the latter’s ships were mainly doing the Southern Mindanao and Western Visayas routes.

The year 1979 was very significant for Philippine shipping in so many ways. First, it was the year when containerization went full blast when the leading shipping companies (Aboitiz Shipping, William Lines, Sulpicio Lines, Lorenzo Shipping plus the earlier Sea Transport) went into a race to acquire container ships. That also meant a lull in passenger-cargo ship acquisitions since more and more it was the container ships that were carrying the cargo to the major ports. Before the container ships, it was mainly the passenger-cargo ships that were carrying the inter-island cargoes. The shift to containerization resulted in passenger-cargo ships being laid up in 1980 and 1981 and later it accelerated the process of breaking up of the former “FS” ships.

Second, it was the year that the road plus ship intermodal system truly started when a Cardinal Shipping ROPAX appeared in San Bernardino Strait to connect Luzon and Visayas by RORO. It was the first step but in the next years ROPAXes linking the islands within sight began to mushroom (this is not to negate the earlier intermittent LCTs that also tried to bridge major islands within sight of each other the RORO way).

A 1980 ad of Cardinal Shipping (Credit to Gorio Belen)

In their split, Carlos A. Gothong Lines and Lorenzo Shipping had two completely different responses to the new paradigm of containerization. The latter tried to join the containerization bandwagon and aside from the acquisition of general cargo ships from Japan for refitting into container ships it also tried to retrofit their earlier general cargo ships into container ships. Maybe Lorenzo Shipping does not have the financial muscle of the others but it tried to make up for this by ingenuity (and maybe Aboitiz Shipping which first tried this approach was their model).

However, Carlos A. Gothong Lines had a different approach. They bypassed the acquisition of container ships and instead went headlong into the acquisition of small ROPAXES (but bigger than the basic, short-distance ferry-ROROs). Most likely their situation as primarily an intra-Visayas and a Visayas-Mindanao shipping operator influenced this. In these routes, there was no need for containers ship as almost all cargoes there are either loose cargo or palletized cargo that are loaded mainly in overnight ships.

There is controversy which shipping company fielded the first RORO in the Philippines (setting aside the earlier LCTs). Negros Navigation claims their “Sta. Maria” was first in RORO liners. That ship came in 1980 and it was a RORO liner, obviously. But as far as ROROs or ROPAXes, there is indubitable proof that Cardinal Shipping fielded the “Cardinal Ferry 1” in 1979 in the San Bernardino Strait crossing.

To make the debate murkier still, the “Northern Star” (a double-ended ferry at first before she was converted and she became the latter “Northern Samar”) and “Badjao” of Newport Shipping arrived in 1978 but they were not doing RORO routes then. By the way, the San Bernardino RORO service became only feasible when the roads in Samar were already passable so it cannot come earlier.

Carlos A. Gothong Lines might win the debate, however, because in 1976 they already had the small RORO “Don Johnny” which they used as a passenger-cargo ship from Manila to Leyte but not as a RORO. This ship later became the “Cardinal Ferry 2” of Cardinal Shipping that was the first to bridge the Surigao Strait as a RORO (that was not an LCT) in 1980 with a fixed schedule and daily voyages. And even though the former vehicle carrier “Don Carlos” arrived for Sulpicio Lines in 1977, still Carlos A. Gothong Lines was technically ahead in ROROs.

The Don Carlos (Credits to Times Journal and Gorio Belen)

The “Dona Lili” was a ship built as the “Seiran Maru” in 1967 by Taguma Zosen in Innoshima, Japan. The ferry measured 69.0 meters by 12.0 meters with an original 856 gross register tonnage, a net register tonnage of 448 tons and deadweight tonnage of 553 tons. She was powered by two Daihatsu engines totalling 2,600 horsepower with gave her a sustained speed of 15.5 knots. The permanent ID of the ship was IMO 6713609.

In comparison, the “Sta. Maria” of Negros Navigation was not much bigger at 72.0 meters by 12.6 meters and 1,110 gross register tonnage. Their speed was just about the same since “Sta. Maria” has a design speed of just 15 knots. So one ship was not clearly superior to the other. It just so happened that the routes of the companies dictated the particular role of the ships. By the way the “Sta. Maria” is still existing as the “Lite Ferry 8” so shipping observers still can benchmark her size, visually.

The “Don Calvino” was built as the “Shunan Maru” by Naikai Zosen in Onomichi, Japan in 1968. The ship measured 62.6 meters by 13.4 meters with an original gross register tonnage of 881 tons. She was powered by twin Hitachi engines of 2,660 horsepower total and a design speed of 14.5 knots. Her ID was IMO 6829484. As a note, the “Dona Lili” and the “Don Calvino” had long lives and they even outlived their company Carlos A. Gothong Lines which disappeared as a separate company when it joined the merger which created the giant shipping company WG&A.

Another RORO also arrived for Carlos A. Gothong Lines in the same year 1980. However, the ship did not live long. This ferry was the “Dona Josefina” which was built as “Kamishiho Maru” in 1968 by Mitsubishi Heavy Industries in Shimonoseki, Japan. This ship had the external dimensions 71.6 meters by 13.0 meters and her gross register tonnage was 1,067 tons which means she was slightly the biggest of the three that came to Carlos A. Gothong Lines in 1980 and almost a match to the “Sta. Maria” of Navigation in size (incidentally the two ships both came in 1980). This ship was powered by twin Daihatsu engines of 2,600 combined like the “Dona Lili” and her sustained top speed was 15 knots. Her permanent ID was IMO 6823399.

Acquiring three medium-sized ROROs in a year showed the bet of Carlos A. Gothong Lines on ROROs or ROPAXes instead of container ships. Actually in overnight routes, it is ROROs that is needed more because it simplified cargo handling especially with the employment of forklifts which is several times more efficient than a porter and does not get tired. When Carlos A. Gothong Lines acquired RORO cargo ships starting in 1987 with the “Our Lady of Hope” , it was when they had Manila routes already and those cargo ships were used in that route.

Carlos A. Gothong Lines then had a short pause but in 1982 they purchased the ROPAX “Don Benjamin”. This ship was the former “Shin Kanaya Maru” and she was built in 1967 by Shimoda Dockyard Company in Shimoda, Japan. This ship measured 61.0 meters by 13.7 meters and the gross register tonnage was 685 tons and her permanent ID was IMO 7022875. She was powered by a single Nippon Hatsudoki engine of 2,550 horsepower and her design speed was 15 knots. Her engine was the reason the ship did not have a very long career here. 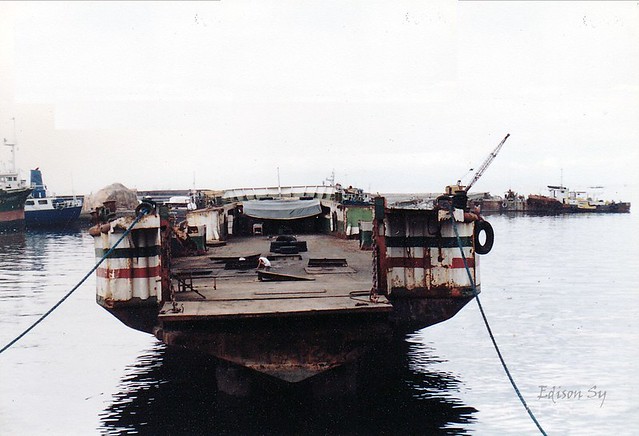 In 1983, Carlos A. Gothong Lines acquired two more ROROs, the “Dona Casandra” and the “Dona Conchita” which were both ill-fated here. The “Dona Casandra” was the former “Mishima Maru” and built by Hashihama Zosen in Hashihama, Japan. She was smaller than the other ROROs of Carlos A. Gothong Lines at 53.8 meters by 11 meters but her register tonnage was 682 tons. Her engines were twin Daihatsus at 2,000 horsepower total and that gave her a top speed of 14 knots, sustained. She possessed the IMO Number 6729476.

The other ship, the “Dona Conchita” was significantly bigger than the others as she had the external dimensions 82.0 meters by 13.4 meters and Japan gross register tonnage of 1,864 tons. This ship was the former “Osado Maru” and she was built in 1969 by Ishikawajima Heavy Industries (IHI) in Tokyo, Japan with the IMO Number 6908187. This bigger ship with a design speed of 16.5 knots was supposedly what will bring Carlos A. Gothong Lines back in the Manila route. However, both “Dona Casandra” and “Dona Conchita” sank before the decade was out.

While Carlos A. Gothong Lines was acquiring these ships, they were also disposing of their old ferries including ex-”FS” ships they inherited from their mother company Go Thong & Company before the split in 1972. What they did, the selling of old ships to acquire new was actually the pattern too in the other national shipping companies. The war-vintage ships then were already four decades old and were already in its last legs and its equipment and accommodations were already outdated compared to the newer ships that were already beginning to dominate the local waters.

After 1983, Carlos A. Gothong Lines’ ship acquisitions went into a hiatus for three years (but they already acquired six ROROs, much more than the total of the other shipping companies). Well, almost all ship acquisitions stopped then. The crisis that hit the Philippines was really bad and nobody knew then where the country was heading. But in 1986 when the crisis began to ebb and more so in 1987 and 1988 they acquired another bunch of RORO ships, bigger this time including RORO Cargo ships. That was the time that they attempted to become a national liner shipping company again after they became one of the Big Three in Visayas and Visayas-Mindanao shipping (the other two were Sweet Lines and Trans-Asia Shipping).

The Our Lady of Guadalupe (Credits to Manila Times, Rudy Santos and Gorio Belen)

But then, the return of Carlos A. Gothong Lines as a national liner shipping company is worth another story, as they say.