The Aleson Shipping Lines of Zamboanga City has 4 basic, short-distance ferry-ROROs, their Ciara Joie series which consists of the Ciara Joie, Ciara Joie 2, Ciara Joie 3 and Ciara Joie 5. Of course, their numbering reflects the order of their arrival in the country. These basic, short-distance ferry-ROROs of Aleson Shipping are used in their Zamboanga-Lamitan, Dapitan-Dumaguete and Dumaguete-Siquijor routes and they rotate among these three. The first and the third are really short routes while the Dapitan-Dumaguete route is almost the distance of an overnight ferry. The routes of Aleson Shipping from Dumaguete reflects their successful foray outside Zamboanga in the 2000’s after their failed expansion in the 1990’s and the Ciara Joie series is one factor responsible for that.

The first ship in the series, the Ciara Joie of Aleson Shipping came in 2007. She was the former Kamagiri No. 3 in Japan and was built by Imamura Shipbuilding Company in Kure, Japan in 1979. She possesses the IMO Number 7824778 and her Call Sign is DUJ2242. The ship only has a single a single passenger deck, a single car deck with a single car ramp at the bow, a single engine and screw (propeller), the common characteristics of the quintessential simple design of a basic, short-distance ferry-RORO.

Ciara Joie‘s external measurements is a Length of 38.2 meters with a Beam of 8.6 meters and a Depth of 3.0 meters. Her Gross Tonnage (GT) is 235 while her Net Tonnage (NT) is 139. She has a passenger capacity of 239 persons all accommodated in benches. This ship is powered by a single Daihatsu engine of 900 horsepower and her sustained top speed when still new was 10.5 knots. Amazingly for a ship of her type and her Date of Build she already possesses the modern bulbous bow.

Meanwhile, the Ciara Joie 2 arrived in 2012 and she was the former Kamagiri No. 7 in Japan. Actually, she is the sister ship of Ciara Joie, the reason the two looks much alike. The ship was also built by Imamura Shipbuilding in Kure, Japan in 1982. She has the IMO Number 8216966. She also just have one passenger deck, one car deck, a single ramp, one engine and one propeller.

The Ciara Joie 2 measures 36.1 meters by 8.7 meters by 2.9 meters and her Gross Tonnage is 198. However, her declared Net Tonnage is only 100 but her declared passenger capacity is 236, all in benches too. She also has a bulbous stem and she is powered by a Daihatsu engine of only 750 horsepower and so her top speed when still new was only 10 knots, sustained. Like the Ciara Joie, she has only one mast.

The Ciara Joie 3 arrived in the country in 2014 and she was the former Ferry Yumutsu of the Miyako Ferry K.K. in Japan. She is not a sister ship of the first two and she was built by a different shipyard, the Izutsu Zosensho in Nagasaki, Japan in 1995 and so she is more modern than the first two ferries of the series. This ship has the IMO Number 9118862. She also has the usual characteristics of a basic short-distance ferry-RORO in terms of decks, ramps, engine and propeller as in they are all single. 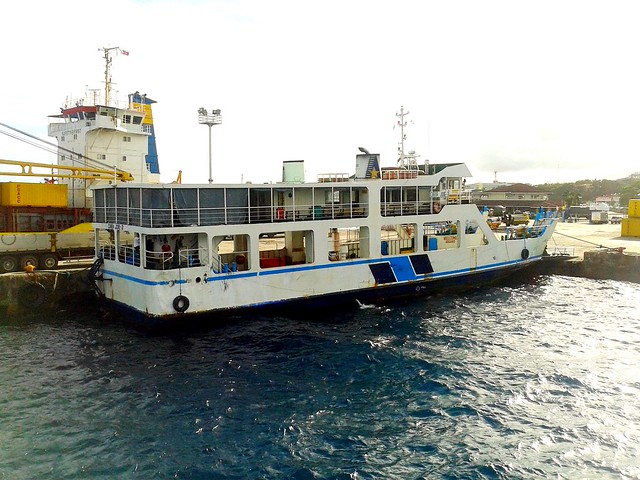 The ship’s external measurements are 37.0 meters by 9.5 meters. Her gross size in GT is 191 (this has no unit). She has a declared DWT of only 30 tons which looks improbable because if that is true then she can only carry 2 trucks at most. Basic, short-distance ferry-ROROs usually have a design speed on 10 to 11 knots as they were meant to bridge short sea crossings only.

The last to arrive for Aleson Shipping was the Ciara Joie 5 and in the series she is the one which looks most impressive and modern. The ferry also arrived in 2014 and she was the former Kofuji No. 8 in Japan in 1987 and so she is an elder ship compared to Ciara Joie 3. Her IMO Number is 8615734 and she was also built by Imamura Shipbuilding in Kure, Japan. She also has just one passenger deck, one car deck, one ramp at the bow, a single engine and single propeller.

The ship has an LOA of 36.3 meters, Breadth of 10.0 meters and Depth of 3.0 meters and her Gross Tonnage is 264. So she is the biggest of the four in the Ciara Joie series and this ship still has a separate air-conditioned accommodation. This ferry is powered by a single Niigata engine of 1,000 horsepower and the sustained top speed is 11 knots.

In the main, like other basic, short-distance ferry-ROROs, the loading capacity of the four Ciara Joie ships is only 6 trucks but if a truck or trailer is loaded with container van it can still be shoehorned in. If there are smaller vehicles the total that can be loaded increases.

All the ferries in the Ciara Joie series are still very reliable and all are proving valuable for Aleson Shipping. They might look puny but basic, short-distance ferry-ROROs are actually important in the short routes and they can sail profitably even though the traffic in the route is not that great.

For a long time to come these four will still be fit for the Zamboanga to Basilan routes and the route from Dumaguete to Siquijor.

Note: Just this month (May 2017) another Ciara Joie ship arrived for Aleson Shipping, the Ciara Joie 7. However, that ship is not a basic, short-distance ferry-RORO.