Last month, September of 2017, Roble Shipping has finally sailed to Oroquieta, the capital of the small Mindanao province of Misamis Occidental (which actually hosts a lot of ports and among them are Ozamis and Plaridel ports). It is maybe the first port of call in Mindanao ever for Roble Shipping and it is actually a long-delayed move already for Roble Shipping as their namesake-to-the-city Oroquieta Stars has long been in the news that she will sail for that city and port since late last year (but since then although the ship is already ready she was just sailing for Hilongos in Leyte).

I have been observing Roble Shipping for long already and watched its consistent growth both in passenger shipping and cargo and even in cargo RORO LCTs in the recent years. But I am puzzled with their moves or more accurately their lack of moves in developing new passenger routes that their cousin shipping company and Johnny-come-lately Medallion Transport which with their courageous moves in developing new routes seems to have already overtaken them in passenger shipping (it even reached Mindanao ahead of them when Medallion’s Lady of Good Voyage plied a route to Dipolog).

Roble Shipping is actually one shipping company that has more ferries than routes, the exact opposite of another shipping company I am also observing which is Trans-Asia Shipping Lines Inc. (TASLI) which in their tepidness in acquiring replacement ferries has more routes than ferries now. Does that mean the two shipping companies needed a merger? Just a naughty thought but that is actually impossible now as Trans-Asia Shipping Lines took the easy way out of their troubles which is selling themselves to the Udenna group of new shipping king Dennis Uy which is flush in money nowadays and might not need any help.

I remember that before Roble Shipping has an approved franchise to Nasipit but they never got about serving that route from Cebu. To think they had the big and good Heaven Stars then, a former cruiseferry in Japan then which should have been perfect for that route. However, that beautiful ship soon caught unreliability in her Pielstick engines and I thought maybe that was the reason why Roble Shipping was not sailing the Nasipit route (which actually had the tough Cebu Ferries and Sulpicio Lines serving it then and might really be the reason why Roble Shipping was hesitant).

But then calamitous fate befell Sulpicio Lines when they got themselves suspended after the horrific capsizing of their flagship Princess of the Storm, sorry, I mean the Princess of the Stars in a Signal No. 3 typhoon in Romblon. In the aftermath of that Sulpicio Lines sold for cheap their Cebu Princess and Cagayan Princess to Roble Shipping in order to generate some immediate cash and anyway the two ships were suspended from sailing and were of no use to them.

With the acquisition of the two, suddenly Roble Shipping had some serious overnight ships after the Heaven Stars which was then not already capable of sailing regularly especially when the good Wonderful Stars already arrived for them to compete in the Ormoc route. And one of the two was even a former pocket liner, the Cebu Princess. One of the two is actually a veteran of the Nasipit route, the Cagayan Princess which was fielded there when Sulpicio Lines already had a better ship for the Cebu-Cagayan de Oro route (the ship was named after that city actually as it was the original route of that ship) and their Naval, Biliran route bombed.

But no, the two ships just collected barnacles in the Pier 7 wharf of Roble Shipping, not sailing. I thought maybe there were still ghosts prowling the ships as they were used in the retrieval efforts on the capsized Princess of the Stars. Or maybe they wanted people to forget first as denying the two ferries came from Sulpicio Lines is difficult anyway.

The Cebu Princess and Cagayan Princess finally sailed as the Joyful Stars and the Theresian Stars but not to Nasipit but to Leyte (again!). I thought maybe Roble Shipping got cold feet in exploring Mindanao. And to think the service of the once-powerful and proud Cebu Ferries was already tottering then and everybody knows Gothong Southern Shipping Lines won’t last long in the Nasipit route with their Dona Rita Sr. (they eventually quit and sold their passenger ships).

With a surplus of ferries in their only routes which are all to Leyte (Hilongos and Ormoc), eventually their legendary cruiser Ormoc Star rotted in Pier 7. Soon, Roble Shipping got a reputation of laying up a lot of ships in Pier 7 (this is very evident when one takes a ride aboard the Metro Ferry ships to Muelle Osmena in Mactan island). They are all huddled up there including the cargo ships. Maybe as protection for the cold so they won’t catch flu (rust, that cannot be evaded).

Two sisters ships also joined the fleet of Roble Shipping, the former Nikel Princely of Aleson Shipping Lines of Zamboanga and the former Filipinas Surigao of Cokaliong Shipping Lines. The two became the Blessed Stars and Sacred Stars in the fleet of Roble Shipping, respectively. However, although one route was added, the Baybay route of the former Filipinas Surigao (which is again in Leyte) there was no other route except for the route they opened in Catbalogan in the aftermath of the demise of Palacio Lines, the Samar native shipping line. With their small ferries Roble Shipping also tried a route to Naval, Biliran which was formerly part of Leyte. I thought maybe Roble Shipping really loves Eastern Visayas too much that they simply can’t get away from it.

Two more ferries came, the former vehicle carriers TKB Emerald and Taelim Iris which slowly became the Graceful Stars and Oroquieta Stars, respectively (but then the Wonderful Stars was no longer wonderful as she was already out of commission after a fire in Ormoc port). Still the two just sailed to Leyte. And eventually, Roble Shipping quit Catbalogan which is a marginal destination to begin with because of the intermodal competition (trucks are loaded to western Leyte ports and just roll to Samar destinations and passengers also use that route). Roble then transferred the two sister ships Blessed Stars and Sacred Stars to become the Asian Stars I and Asian Stars II of the Theresian Stars, the new shipping company which was their joint venture with a former Governor of Sulu province. The two should have been alternating the the overnight Zamboanga to Jolo ferry route. But nothing came out of the venture and soon the two were back in Cebu. Technically, that was the first venture of Roble Shipping to Mindanao but not under the flag of Roble Shipping.

I thought Roble Shipping was really allergic to Mindanao but soon I was disabused of this thought when the news came out that definitely Oroquieta Stars will sail to Oroquieta City after supposedly some requirements were ironed out. That is good as some things will then be tested. Oroquieta is actually too near the Plaridel port which competitor (in Leyte) Lite Ferries is serving and which the defunct Palacio Lines was serving before. Roble Shipping and Lite Ferries will practically be sharing the same market and I do not know if enough cargo and passengers will be weaned away from Dapitan and Ozamis ports but then Dapitan port is nearer to Cebu with cheaper fares and rates.

Oroquieta Stars is fast among the overnight ferries having relatively big engines and has a design speed of 16 knots. I just thought that if it is worthwhile for Cokaliong Shipping Lines to extend their Ozamis route to Iligan, won’t it be profitable for Roble Shipping to extend their Oroquieta route to Tubod in Lanao del Norte or to Iligan perhaps? Tubod can be one of the origins of the Muslim-owned commuter vans which have a route to Cotabato City via Sultan Naga Dipamoro or Karomatan (these vans go up to Kapatagan in Lanao del Norte).

We will have to see if Roble shipping can stick with the Oroquieta route as their competitor Lite Ferries take all challengers very seriously. Funny, but Roble shipping was much ahead of them in the Leyte routes. However, Lite Ferries is very aggressive and is easily the most aggressive shipping company in this decade taking away that mantle from Montenegro Shipping Lines (but then they might just have the same patron saint anyway but the favors and flavors might have changed). 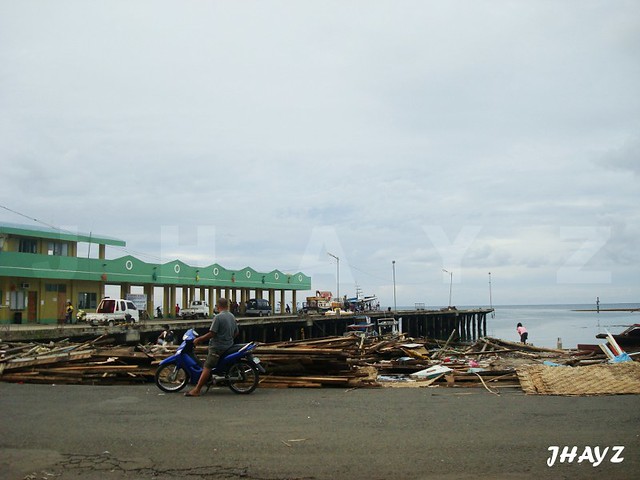 Oroquieta Port by Hans Jason Abao. Might be improved by now.

I wish Roble Shipping all the luck in their Mindanao foray and how I wish they will explore more routes because after all the availability of ferries is the least of their concerns (sabi nga sa bus krudo lang ang kailangan para tumakbo). That could also be their case. Plus franchise and some explorations maybe (well, if Medallion was able to use their cargo ships for that so they can too as they also have a lot of freighters now).