It was a friend of mine who worked as trusted man of someone high up in shipping who told me that MARINA has set it just to 30 or 35% load for a container ship to be profitable. I was aghast by that because that will mean terrible inefficiency and high rates for the shippers. That was twenty years ago and in that same time span our local shipping industry has been under attack for very high rates and it has been pointed out that from Davao it is much cheaper to send a container van to Hongkong or Singapore which are much farther than Manila. But even after two decades there has been no change in the situation of the industry. If there was, it is the rates went up geometrically higher. And of course that was unacceptable but our bureaucrazy only acts to change things if there is already an imminent revolt.

Intermodal trucks for loading in BALWHARTECO Port in Allen, Samar

As they say water seeks its own path and one cannot hold or bottle it forever. One big response by shippers that I saw was in the widespread deployment of intermodal trucks that use our highways and then boards short-distance ROROs at the end of the road and then continue on to the next island. The intermodal truck might then still board another short-distance RORO to another island. I found out there are even trucks whose origin is Mactan island which are bound to Manila and will traverse Cebu island, Negros island, Panay island and Mindoro island before landing in Batangas port. And of course intermodal trucks from Manila or CALABARZON find its way to Davao regularly and there are some that reach as far as Zamboanga.

“Consolidation” of the local cargo shipping industry especially the container sector has long been proposed by experts both local and foreign. But it has fallen into deaf ears and the national government will not wield the proverbial stick to make this come true and so it lays until now where it started, that is as proposals. “Consolidation” would have led to greater efficiency and thus lower rates. But locally, businesses and not only shipping wants to see efficiency not to lower rates (of course, they will pay lip service to that) but to higher profits. And so greed rules and trumps everything and the higher national interest and greater good do not matter in the end.

Our different shipping companies are republics of their own and historically they have never been into cooperation, consolidation or merger (except the “Great Merger” which produced WG&A and which had been a disaster to local shipping) even though some are related by blood. If there has been a CISO (Conference of Inter-island Ship Owners) in the past, it is only because they want to present a common front vis-a-vis the government and also to make sure that the agreed rates are being observed by all (however, in other countries that will ruled as “cartelization” and subject to penalties or even jail terms; but not here as that term is practically unknown and even Economics teachers here do not know that). Oh, well, actually the cartel master locally is MARINA which sets the rates. Historically, they set the maximum rates but like what happened to LTFRB they treat the maximum rate as also the minimum and MARINA in the end serves just the needs of the shipping companies and not the general public. But before it be misconstrued that they are servile to shipping companies, the truth is shipping companies fear MARINA as their livelihood and fortune is dependent on the decisions of MARINA. If the rates are drastically brought down then they might all go down.

That is the reason why the shipping companies will fight toe and nail for the retention of the Anti-Cabotage Law which bars foreign shipping companies from sailing local or inter-island routes. If the Congress (which has the power to repeal the Anti-Cabotage Law) allows the entry of the much more efficient and capable foreign ships then local cargo rates will drastically go down but our local shipping companies will drown. Regarding the Philippine Competition Commission (PCC), that entity will not amount to anything in shipping because that only checks mergers and mergers are a near-impossibility in shipping.

And so shippers and other related interests will find new ways to bring down rates some other way. One of these is the employment of the cheap and cheap-to-operate LCTs which has only 1,000 horsepower on the average which is just about a third of the power of the container ships. True, they will probably only run at about 7 to 8 knots compared to the 11 to 12 knots of the container ships. So they will take three days to Cebu where a container van will only take two days. But, hey, the bulk of cargo is not express anyway and a difference of one day will not really matter, in the main. Nowadays if one really wants it fast one takes to the plane and use air cargo which is P20/kilo at the lowest now.

It is through the use of chartered LCTs from Asian Shipping Corporation that Ocean Transport had their start. Using big LCTs (by local standards), 94 TEUs can be fitted with the container vans stacked like Lego and handled by big forklifts. The LCTs cost P70,000 a day, fuel and crew included and so the transport cost one way is just over P200,000 not including cargo handling in Manila and possible cargo handling in Cebu. Plus of course other labor, office, yard and anciliary costs and maybe insurance. Under the table money, I have only the vaguest of ideas. But in this calculation one can see the movement of a TEU to Cebu via chartered LCTs is just P4,000, starting. That will not be the actual rate but one can see how low it is via LCT when the normal commercial rate for a TEU to Cebu is probably 5 times of that. The LCT might have just a capacity of 94 TEUs and the container van has 300 TEU but if they are only a third full on the average then the actual load of the two is just about equal and the LCT has probably only has a third of the horsepower of the container ship. The LCT usually has about 100% load. So it is very easy to see which is more efficient and why an LCT can give much, much cheaper rates. 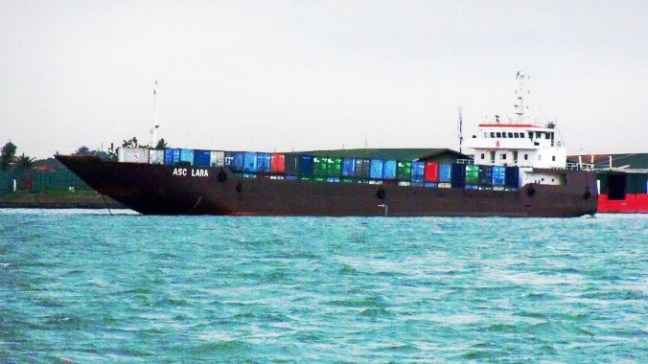 Roble Shipping was the next to follow the shipping model of Ocean Transport and like the first they were also very quiet about it. Maybe the two fear that if it becomes known widespread that the LCT mode is successful some shipping companies will lobby MARINA and MARINA will institute a crackdown and maybe cite “safety” again which is the usual bogey of MARINA. It has been a long time that the LCTs, being flat-bottomed and not that resilient against capsizing has been tagged with safety issues. It does not help either that being open-decked and having a low freeboard some issues were also attached by some to those. [Note: Ocean Transport and Roble Shipping now operates their own LCTs regularly carrying container vans from Manila to Cebu.] 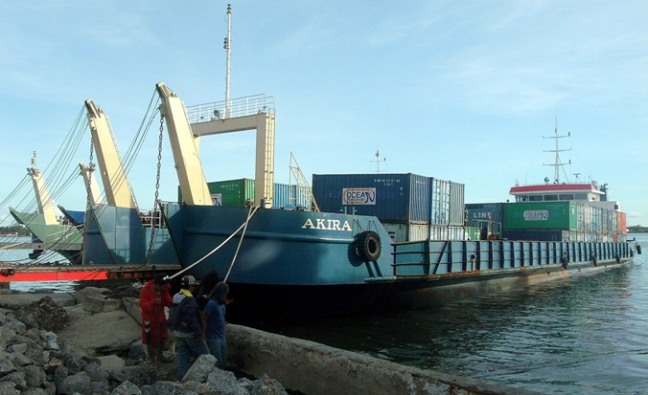 The longest route I have seen LCTs bring container vans regularly is from Manila to Cagayan de Oro. And so locally it is proven now that LCTs can be container carriers for 500 nautical miles. I do not know if they are capable of Southern Mindanao routes which is up to 800 nautical miles but I think they can do it if needed. Of course, LCTs are normally earlier to seek shelter than container ships when there are storms. But if MARINA and the Coast Guard suspends voyages at 45kph wind speed then the container ships might not have an advantage anymore.

The LCTs are looked down upon by many but they should know that China which is already the biggest shipbuilding country in the world and is already a shipping power widely uses LCTs to move their cargo internally and on shorter distances. Actually most of our new LCTs now are from China and many came here brand-new. In terms of age, our LCTs might be younger than our container ships now. And LCTs are the backbone of our Cargo RORO LCT fleet which not only move trucks but also trucks and trailers bearing container vans especially to islands that are not served well by container ships like Bohol, Leyte and Samar.

If MARINA won’t crack down, I see intermodal trucks and LCTs further taking away the business of the container ships which is still growing in number but I know their cargo volume is not increasing. Consolidation would have been easy for them if they will just open their eyes and be open-minded and it does not mean that they would have to merge, an anathema to many executives as that might mean losing their positions and careers that they have built over the years. Actually the simplest consolidation is the swapping of container vans. There is no container company that has daily departures even from Manila and the simplest is they should load their containers to their partner shipping companies which has the nearest departure. That will mean ships being fuller and at the end of the month they can reconcile their figures and charges would have to be paid for the difference but of course it should be on friendship or partner rates.

With that, less ships might have to be employed, there would be less sailings and that would have to mean savings that should be passed on to consumers if they have any integrity. With consolidation too there might be enough containers vans to ports and islands that they have already abandoned or bypassed and so the container ships can come back there and sailing level might be maintained (now isn’t that neat?). Internationally, this system I mentioned is already being used and not only in shipping. I don’t see any valid reason why the local shipping companies can’t do it. It will only be impossible if their distrust of each other is too much and their owners and executives are too obtuse. The national government should also wield the stick after incentives are laid out. They can even set the rules and the system. It is high time already as for the past two decades after constant criticisms I have not seen our local container companies try to bring down container rates to acceptable world standards. They are just being kept afloat by the blood of the shippers. And that is why forwarder companies are making great strides and container shipping is just where they were two decades before. That is also the true reason they won’t venture out to foreign waters because they simply cannot compete. Regarding their charge that our ports are too shallow that is baloney because much bigger foreign ships use the same major ports that they do.