The government ports that were built in the 1980’s to connect Luzon, Visayas and Mindanao through the eastern seaboard of the country were not called “ports” but instead were called “ferry terminals”. And so it became Matnog Ferry Terminal, San Isidro Ferry Terminal, Liloan Ferry Terminal and Lipata Ferry Terminal. The four actually had a common design in their port terminal buildings and general lay-outs. The paint schemes are also the same.

Matnog town had been the connection of Sorsogon and Luzon to Samar even before World War II and it might even been before the Americans came. That situation and importance was simply dictated by location and distance as in Matnog is the closest point of Luzon to Samar. In the old past, that connection to Samar crossing the San Bernardino Strait was done by wooden motor boats or what is called as lancha in the locality.

These lanchas existed until the early 1980’s. Their fate and phase-out was forced by the arrival of the pioneering Cardinal Shipping RORO in 1979, the Cardinal Ferry 1. With the arrival of other ROROs and especially the government-owned and promoted Maharlika I, the fate of the lanchas were slowly sealed until they were completely gone. By this time the new Matnog Ferry Terminal which was a replacement for the old wooden wharf was already completed. 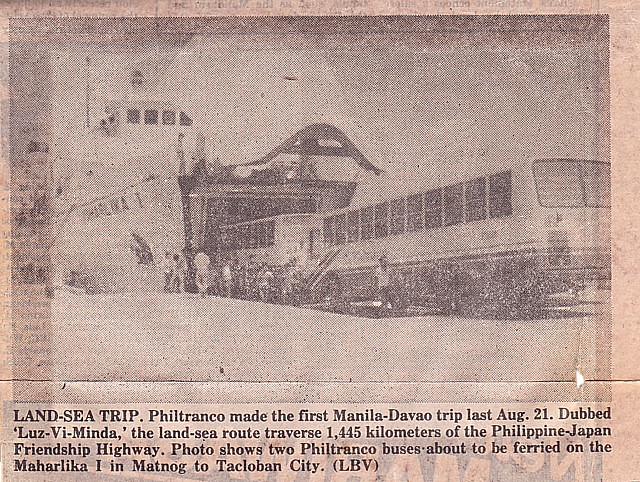 The Matnog Ferry Terminal is a RORO port with a back-up area for vehicles waiting to be loaded. At the start when there were few vehicles yet crossing and there were only a few ROROs in San Bernardino Strait that back-up area was sufficient. But over time it became insufficient and so additional back-up areas were built twice. Before that the queue of vehicles sometimes went beyond the gate and even up to the Matnog bus terminal/public market. Worst was when there were trip suspensions and vehicles especially trucks snaked through the main streets of of the small town of Matnog.

The Matnog Ferry Terminal is one of the more successful ports of the government. Actually most ports owned by the government do not have enough revenue to pay for the operational expenses like salaries, security, electricity, transportation and communication and for maintenance. The performance and success of Matnog Ferry Terminal is dictated not by the quality of port management but simply by the growth of the intermodal system. From Luzon there is no other way to Eastern Visayas except via Matnog. The intermodal system began to assert itself in the 1980’s until it became the dominant mode of connection to most of the islands in the country.

The existence of those many ports in Samar showed the increase over the years of the number of ROROs crossing San Bernardino Strait and also the number of vessel arrivals and departures. Currently, on the average, a dozen ferries and Cargo RORO LCTs serve the routes here with the companies Sta. Clara Shipping Corporation/Penafrancia Shipping Corporation, Montenegro Shipping Lines Incorporated, 168 Shipping Lines, Archipelago Philippine Ferries Corporation, SulitFerry and NN+ATS involved. The last two mentioned are operations of the liner company 2GO.

In Samar, all those ferries can be docked simultaneously thereby showing enough docking capacity. In Matnog Ferry Terminal only about five ferries can be docked simultaneously especially since the two new RORO ramps there seems not to be in use. When they built that it was by means of bulldozing rocks into the sea to build a back-up area and those rocks seem to be dangerous to the ferries and their propellers and rudders which means a possible wrong design or construction.

When the government built a back-up area near the Matnog terminal/market, I assumed a true expansion of Matnog Ferry Terminal there. A causeway-type wharf could have been developed there and the docking ferries could have been separated there so there would be less mix-up of the departing and arriving vehicles. Causeway-type wharves like what was successfully deployed by the BALWHARTECO and Dapdap ports. This type of wharf is very efficient in using limited wharf space and it is very good in handling ROROs and LCTs.

Until now the Philippine Ports Authority (PPA) insists on using pile-type wharves which is more costly but less efficient. A pile-type wharf is good if freighters and container ships are using the port but freighters do not dock in Matnog but in nearby Bulan port and there are no container ships hereabouts. If there are container vans passing here it is those that are aboard truck-trailers. But many know that if there are “percentages”, the less efficient pile-type wharves will guarantee more pie than can be “shared” by many. And I am not talking of the pie that comes from bakeshops.

Matnog Ferry Terminal by its evolution is actually a little bit different now from its sister ports because its wharf has an extention through a short “bridge” like what was done in Cataingan port although this is less obvious in the case of Matnog. The three other Ferry Terminals have no such extensions which is done if the water is shallow and there is enough money like in Ubay port which has an extension that is long and wide enough to land a private plane already (and yet it handles far less traffic than the Ferry Terminals). Almost always the priorities of government in disbursing funds is questionable at best. The budget used in Ubay port would have been more worthwhile if it was used in the shallow Pilar port which has far more traffic and is of much greater importance.

With lack of RORO ramps it is normal that ferries in Matnog will dock offshore. It is also usual that a ferry will wait a little for a ferry loading to depart before they can dock especially at peak hours. Again, the docking of ferries askew to the port in high tide where there is no RORO ramp still goes on. Matnog Ferry Terminal and the Philippine Ports Authority is really very poor in planning that one will question what kind of data do they input in planning. I even doubt if the idea of a breakwater ever crossed their minds. Matnog is one place where swells are strong especially both in habagat and amihan (it has that rare distinction) or if there are storm signals (and Bicol is so famous for that) or when there is what is called as “gale” warning by the anachronistic weather agency PAGASA (they issue a “gale warning” even if there is no gale; they could have just issued a “strong swell “ warning because it is actually what they are warning about).

In Bicol, Matnog Ferry Terminal has the most number of vessel departures per day if motor bancas are excluded. Matnog’s vessel departures can reach up to 20 daily in peak season with a corresponding equal number in arrivals. In this regard, Matnog Ferry Terminal is even ahead of the likes of Legazpi, Tabaco and Masbate ports and such it is Number 1 in the whole of Bicol. That will just show how dominant is the intermodal system now. And how strategic is the location of Matnog.

A few years ago there was a change in Matnog Ferry Terminal that I was bothered about. Matnog is one port that has a very strong traffic and traffic is what drives income up. But before her term was up Gloria gave the operation of Matnog Ferry Terminal passenger building to Philharbor Ferries. This was also about the same time she wanted to privatize the regional ports of the country with strong traffics like Davao, Gensan and Zamboanga.

Now what is the point of giving the control of a passenger terminal building of a very strong port to a private entity? That port terminal building is actually a cash machine. Imagine about 2,000-3,000 passengers passing there daily in just one direction. Of course Gloria has some debt to the true owner of Philharbor in terms of executive jet services during her term and for providing escape to Garci. Was the deal a payback?

No covered passenger walkway in Matnog

After years of private operation I have seen no improvement in Matnog Ferry Terminal. From what I know the construction of the two new back-up areas were funded by government. So what was the transfer of control of the passenger terminal building all about? They cannot even build a covered walkway from the passenger terminal to the ferries when BALWHARTECO port was able to do that (and both have long walks to the ferry). Does it mean that BALWHARTECO port cares more about its passengers?

Matnog Ferry Terminal could have been a greater port if properly managed and it should have been properly managed and programmed because it is one of the critical ports of the country. It is actually the strongest of the four Ferry Terminals and by a wide margin at that. Now, if only they will plow some of the profits of the port back into improvements of the port. Or shell out money like what they did to Ubay and Pulupandan ports which severely lacks traffic until now even after spending three-quarters of a billion pesos each. Again one will wonder what kind of data PPA used. Did the “figures” come from whispers of powerful politicians? And did they twist the moustache of NEDA Director-General Neri?

Quo vadis, Matnog Ferry Terminal? You should have been greater than your current state.