Many times a reader will read “Cotabato Port” when it comes to shipping and many of them will think of the great but now conflict-ridden city of Cotabato. They will not realize that the “Cotabato Port” referred to is actually the Polloc port in Parang town in Maguindanao province which is about kilometers from the city. The true Cotabato Port is actually a river port near the mouth of Cotabato River hence it is shallow and can just accommodate small and shallow-draft vessels.

So when ships became bigger, the government decided to develop a new port for Cotabato City but this was not located in the city but in the nearby town of Parang. Actually the port was between Cotabato City and Parang and its name is Polloc port and the national government promoted and supported it well.

In the past, Polloc was a viable port when the roads in the region were still terrible. Sulpicio Lines and Aboitiz Shipping made good sailing there and they even had dedicated passenger-cargo ships and container ships to Polloc port. Sulpicio Lines used the Dona Marilyn (the former Dona Ana) which was a good fast cruiser liner then. They then fielded the RORO liner Cotabato Princess when it arrived and she served the route here well.

Aboitiz Shipping tried this route with a newly-fielded ship here, the SuperFerry 3, smaller that her fleetmates but more fit for this route. When the merged shipping company WG&A was formed a slew of ships served the route including the former William Lines flagship Dona Virginia and a host of ROPAXes including the very well-regarded SuperFerry 1 and SuperFerry 8. The respected sisters SuperFerry 2 and SuperFerry 5 also served Parang port along with the Maynilad. Doesn’t that line-up tells one that Parang port and the Cotabato route was once good then? 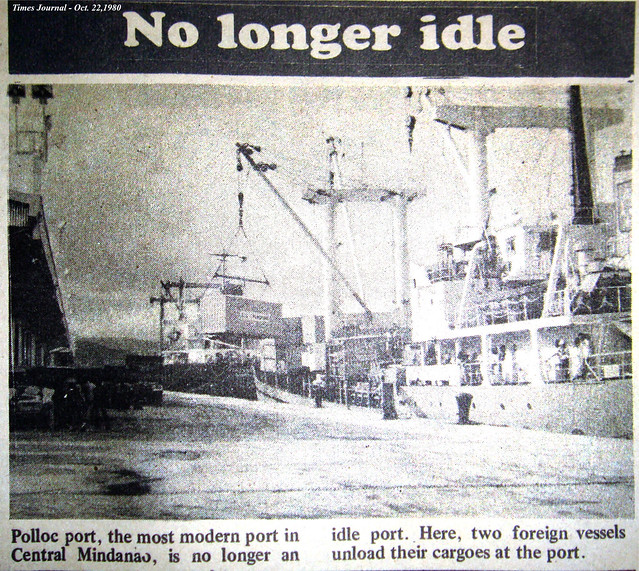 Of course Parang will not be as strong a port like Dadiangas or what is later known as Gensan. South Cotabato was able to develop agribusiness (think Dole) and a hog industry and that was what supported the port. Cotabato and Parang had no such equivalent especially since the area became conflict-ridden at the approach of the 1970’s and in the aftermath the area sank into a certain degree of lawlessness which is a deterrent for trade, investment and tourism.

When the conflict and lawlessness abated a little, Cotabato and Parang did not rise even though the government tried to pour in money and promoted Parang port especially when the SPDA (Southern Philippines Development Authority) was created. And the support continued under the banner of the ARMM (Autonomous Region of Muslim Mindanao) and it tried to attract Malaysian businessmen and other businesses and promoted Polloc as a free port and ecozone.

Ironically, what doomed Polloc was actually the opening of two new highways, the Narciso Ramos Highway which connected to Malabang, Pagadian and a route to Marawi and Iligan or Ozamis and the paving of the old Sayre Highway which connected the area to Cagayan de Oro via Bukidnon. Where before a shipper will have to wait for the weekly ship, now he can truck his goods to Cagayan de Oro, Iligan or Ozamis and the combination of the three means the availability of daily ships plus a shorter sailing time with a lower shipping cost. And for passengers there are many direct commuter vans now from Cotabato to Iligan and Cagayan de Oro. They can just take the ship there and travel time and costs will be less. Conversely, when they arrive in those ports there will commuter vans waiting for them.

Now there is no more liner to Parang and cargo ships and container ships are few although the regional government tries to promote it mightily. However, it does not rise because there are simply better alternatives in shipping out cargo or bringing it in. Long-distance cargo trucks from even Cebu already penetrate the area and the main point of departure is Cagayan de Oro. Davao or General Santos City can also be the entry point especially if the goods are from abroad and there is no problem in trucking in the goods to the Cotabato area (talking of the city and not the old province).

The experience is actually what some say that the left hand does not know what the right hand is doing. It is okay and good to open the Narciso Ramos Highway and the Sayre Highway to connect Central Mindanao to Western and Northern Mindanao but then the unintended consequence is the sinking of Cotabato and Parang port.

I just hope the oil facility invested in by the Malaysians in Parang will somewhat make up for the fall. Hopefully they will allow goods from Singapore to be brought in tariff free under the ASEAN Free Trade Zone (which in Philippine bureaucratic definition means a lot of restrictions since they never care to read the dictionary and there are vested interests hiding behind those restrictions and bureaucrats and politicians protecting them). But then the local Nestle operation will balk because Nestle products from Singapore actually lands cheaper in Zamboanga (and that is even with grease money).

Wither Parang? No, actually I don’t have a good idea. It will be another locality whose fate is dependent on decision makers in Manila even though they don’t know much of local or regional realities.