The company started with ferries that were ex-”FS” and ex-”F” ships. Nothing terrible and shameful in that as most regional companies had those types as the backbones of their fleets. And to think most regionals were even using wooden motor boats or lancha in the Visayan term. Some others were of US minesweeper or PT boat origin. 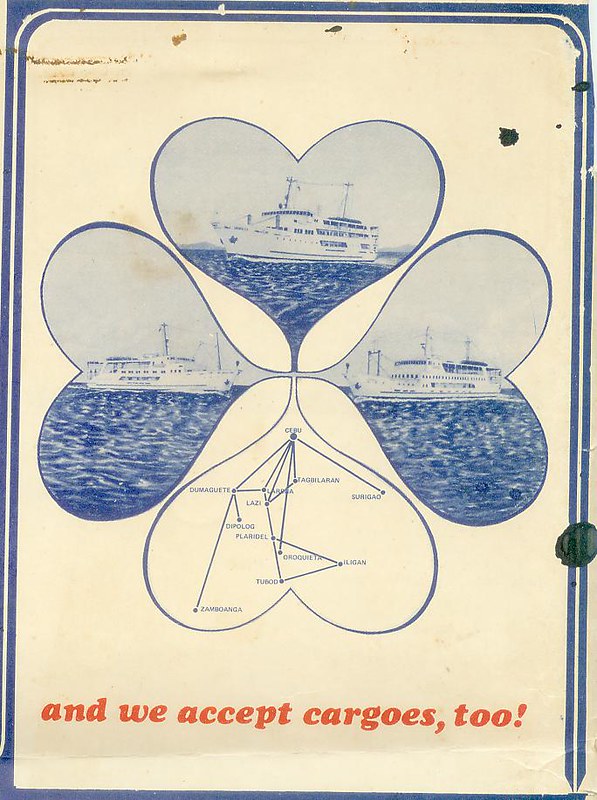 In due time, from the late 1970’s, George & Peter Lines dominated the route going southwest of Cebu. That was the route going to Siquijor, Dumaguete, Dapitan, Zamboanga del Norte (like Liloy), Zamboanga City, Misamis Occidental and Lanao del Norte. That was the time when cruisers were still dominant and ROROs were just beginning to come. George & Peter Lines had some great cruiser ships like the Geopeter, Jhufel and the still-existing Georich. Aside from those three they had former “FS” and former “F” ships which were vintage World War II ships then in the twilight of their careers. Among those were Don Joaquin, Dona Rosario and the Don Victoriano I.

The peak of George & Peter Lines probably occurred during the 1980’s. They were even active in advertising and in promoting their ships and routes. During this time the seas where she was sailing, the conjunction of Zamboanga, Negros, Siquijor and Lanao was already being vacated by the ships from Manila because their once-ubiquitous and many ex-”FS” and lengthened ex-”FS” ships were already beginning to die. Also, the old paradigm of small liners from Manila calling on many ports before heading back was also on the wane because since the 1970’s fast cruisers calling in less ports was already the new paradigm. Passengers want to arrive to their destination in one day or just a little more, not the two or three days of the past even though they are fed well. So liners calling on Masbate or Calbayog or Catbalogan before heading to Cebu and northern Mindanao were beginning to fall out of favor with the passengers. And so sometimes it is the likes of George & Peter Lines which acted as feeder lines to the fast cruisers. 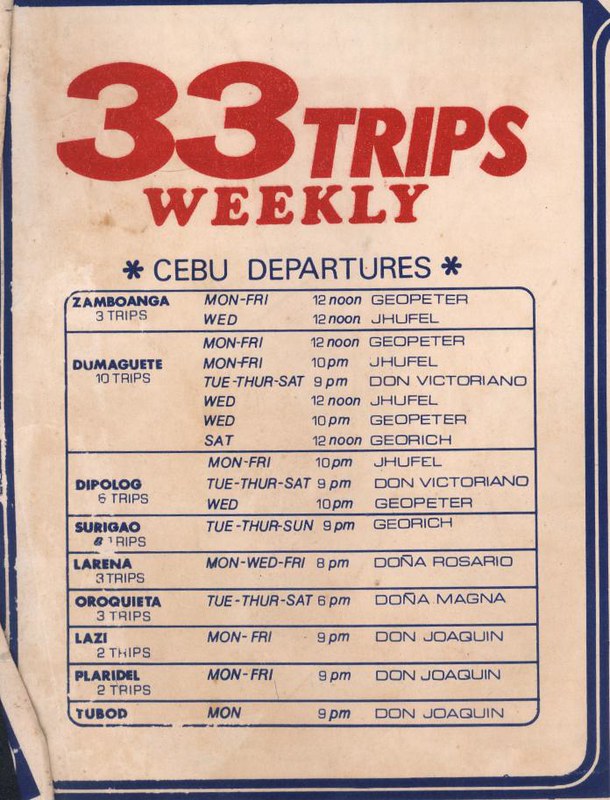 But then that decade also saw the rise of a new paradigm, the new RORO (Roll On, Roll Off) ships. George & Peter Lines was not really late in adopting the new shipping paradigm. They were just not as fast to it as Trans Asia Shipping Lines, Sweet Lines and K&T Shipping Lines but they were just at the same time to it with the likes of Cokaliong Shipping Lines, E.B. Aznar Shipping and Danilo Shipping Lines. They were even ahead to it compared to Roble Shipping, Palacio Lines, Island Shipping , Roly Shipping and VG Shipping. Some never even reached the RORO stage like the Rose Shipping/V.Atilano, Gabisan Shipping Lines and Lapu-lapu Shipping. I purposely left out in the comparison the shipping companies which were founded later or which were too small to be in the comparison.

And that is the reason I was wondering why in an interview with the Liner Shipping Route Study (LSRS) done by Nathan & Associates in 1993-1994 aS commissioned by the USAID they expressed apprehension and disapproval of the liberalization program on shipping being pushed by then President Fidel V. Ramos which resulted in the opening of the shipping routes. The one that entered their primary route, the Dumaguete and Dapitan route in 1993 was just a small ship, the Filipinas Dumaguete . Cokaliong Shipping Lines, its owner and operator was no bigger than them and were not really ahead of them in conversion to ROROs. In fact, Filipinas Dumaguete was just the first RORO ship of Cokaliong Shipping Lines Inc. and G & P’s Dumaguete Ferry which was acquired in 1990 was even ahead of that though a little smaller. Was it the fear that Mr. Chester Cokaliong was close to President Ramos? But they still had a big brother then in William Lines. Or was it the accidents that befell Geopeter and Jhufel that resulted in hull losses and which shrank their fleet along with the retirement of the war-surplus vessels that later forcing them to withdraw Georich from the Cebu-Maasin-Surigao route that were haunting them?

In 1993, George & Peter Lines acquired the relatively big Zamboanga Ferry and this practically became their flagship and meant to hold the Zamboanga route. However, I would say this was not enough to offset the loss of Geopeter to fire and Jhufel to foundering and the subsequent loss too of Dumaguete Ferry to fire too and Pulauan Ferry to sinking. These consecutive losses of ferries to accidents was a great blow to a medium-sized ferry company especially since about that time they also began losing the very old ex-”FS” and ex-”F” ships to old age. They even sold their aging Dona Magna, a small locally-built ferry to Island Shipping Corp.

With the loss of Pulauan Ferry to sinking just south of Mactan island, the George & Peter Lines fleet shrunk to only 2 ferries, the Zamboanga Ferry and the elderly Georich plus a cargo ship, the GP Tramper. To stem the retreat, they acquired the Sta. Maria, a former liner of Negros Navigation that was just being used in the Bacolod-Iloilo route and being overwhelmed by the Bacolod-Dumangas ferries. In their fleet this became the GP Ferry and the biggest ever of George & Peter Lines. But after just two years of service, they also sold this also. Maybe the 4,800 horsepower of the ship was too big for their route, cargo and patronage.

A few years after that selling they made an advanced arrangement in 2010 with Aboitiz Transport System (ATS) regarding the coming retirement of the ferry Our Lady of Mt. Carmel, a Cebu-Iligan ferry of the ATS subsidiary Cebu Ferries Corporation. Upon retirement, the ferry went direct to George & Peter Lines with nary a modification and the ship became the GP Ferry 2 thereby bringing the George & Peter Lines fleet to 3. It is this 3 that still shouldering on for GP for its diminished route system. They have already left many port in their old route system and all they have now are the ports of Dumaguete, Dapitan and Zamboanga with their main route the Cebu-Dumaguete-Dapitan route. But even here they are pressured by the newer ships of Cokaliong Shipping Lines Inc. which might have even toned down the pressure by reassigning an older ship , the Filipinas Iloilo to the main route of George & Peter Lines.

How long does it last? George & Peter Lines won’t easily quit their last two remaining routes. But their ferries are in advancing ages now. If they don’t acquire ferries anymore, time will come when they will simply have to give up and fade away.

An album on George & Peter Lines: 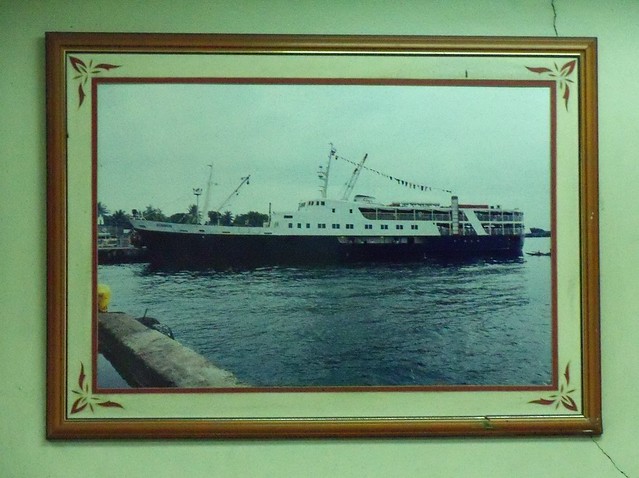 Press to open the album.