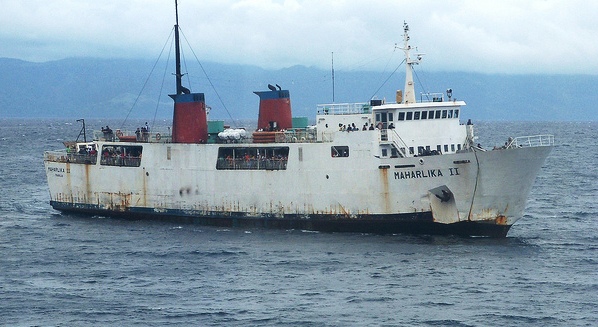 A candidate for Ripley’s “Believe It or Not”? That’s true and so better read on.

Yesterday, it was in the news that Christopher Pastrana, The Boastful is hosting the 41st Interferry Conference that will be held in Manila starting today, October 15. There will be many sponsors for that and it is usually attended by shipping owners, shipbuilders, marine engine makers, various suppliers and other entities connected to shipping to exchange notes and learn about the latest trends and products. By the way, Interferry is not the sole organizer of maritime conferences.

A news item said the FastCats of Pastrana can provide safe ferries as do the ferries of Starlite and the implication is because those are new. Well, not so fast as it is not just the newness of the ship that is a factor in safety. May I remind too that Pastrana lost the Maharlika Dos to capsizing and sinking near Panaon island in 2014 after its engines failed and his Maharlika Cuatro, though just nearby, did not come to its rescue. And Starlite Voyager grounded and reached BER status when it was on the way to a shipyard in 2011. Are they blaming now the oldness of their vessels that sank?

I was angry when Maharlika Dos capsized and sank in 2014 because Pastrana broke the 35-year record of Bicol steel-hulled ferries not sinking while sailing ever since the RORO Cardinal Ferry 2 of Cardinal Shipping came in 1979. The Northern Samar sank in 2006 in a storm but she was not sailing and was just moored in Tabaco port. This perfect record extends to Surigao Strait because no steel-hulled ferries ever sank there since Cardinal Ferry 2 came in 1980, a record that Maharlika Dos broke infamously.

And to think the eastern seaboard short-distance ferry routes are home to the some of the most shoddy ROROs in Philippine waters led by the Maharlika ships of Christopher Pastrana and the Millennium Uno of Millennium Shipping. Well, the ships of Bicolandia Shipping then were also not topnotch and are old. But no matter what these ferries don’t sink even though the eastern seaboard straits are among the most dangerous in the country. As I have said in an earlier article it is seamanship that carried them through. The seamen there would not let their ships sink because they know that among their passengers might be their kins, their friends, their school mates or somebody known to them. But Maharlika Cuatro‘s captain didn’t know that and so he let Maharlika Dos wallow in the ever-strengthening swells until it capsized. And now since he got new FastCats, Pastrana always boasts now about safety and misses no chance to deride the “lack of safety” of his rivals. What gall!

Before Pastrana or even Cusi of Starlite Ferries, another boastful owner, gets carried away let me state that going by the records and empirically there are a lot of ferry companies which are their rivals which have a perfect safety record, i.e. they did not lose ships to sinking. In Bicol, Sta. Clara Shipping, Penafrancia Shipping, Regina Shipping Lines and 168 Shipping Lines have never lost a ferry of theirs. That goes true to the defunct ferry companies that served Bicol like Cardinal Shipping, Newport Shipping, Badjao Navigation and the short-serving Luzvimin Ferry Services. Well, even Denica Lines have not lost a steel-hulled ferry so far.

In Western Visayas, Milagrosa-J Shipping and Tri-Star Megalink both have perfect safety records even though Milagrosa-J Shipping regularly crosses the Sulu Sea which has rough seas and strong winds many months of the year. And to think their sea crafts are small and are already old. It is really in the seamanship.

Batangas shipping companies have no great safety record especially Besta Shipping. But I would like to point out that for a ferry company which has a fleet of over 30, Montenegro Shipping Lines lost only one ferry in 20 years even though they can be found almost anywhere in the Philippines including those that have rough seas. They only lost the Maria Carmela when somebody threw a cigarette butt into a copra truck and thereby igniting a conflagration which was rather unfortunate. And Montenegro Lines have some of the oldest ships hereabouts.

Zamboanga is home to some of ferries that will not look so clean internally and many are also old. But two sailing companies there, Ever Lines and Magnolia Shipping, probably the Number 2 and Number 3 there have perfect safety records as they have not lost a ship even in their freighters. And Sulu, Tawi-tawi and Celebes Sea have strong seas when there is a storm somewhere in eastern Philippines or when the monsoons are blowing hard. Minor shipping companies of Zamboanga like Sing Shipping and Ibnerizam Shipping also have perfect records. The defunct Basilan Lines/Basilan Shipping of the Alanos also did not lose a ship although their Dona Ramona was bombed in Lamitan City.

Mae Wess of Davao has not also lost a ship as do the KSJ Shipping of Surigao. And as far as I know, the currently operating ferry companies of Camiguin – Philstone Shipping, Davemyr Shipping, and Hijos de Juan Corrales have not lost a ship too and it seems that also goes true for the defunct P.N. Roa and and Jade Sea Express. In Panguil Bay, Daima Shipping has not also lost a ship even though their Our Lady of Mediatrix was burned because of the firebombing of two Super 5 buses aboard her in 2000.

In Cebu, for all the size of their fleet Lite Ferries may not lost a vessel (was the Sta. Lucia de Bohol lost at sea?). FJP Lines/Palacio Shipping, defunct now, also has a perfect safety record. There are other defunct shipping companies of Cebu which has not lost a ship through accident and that includes VG Shipping, Roly Shipping/Godspeed, Kinswell Shipping, Jadestar Shipping, Goldenbridge Shipping, Maayo Shipping, Cuadro Alas Navigation, PAR Transport plus many smaller ferry companies. In the recent era, Gabisan Shipping are known for safety and the ability to “read” the waves and have not yet lost one.

If I go by routes, there was not a ferry lost in Roxas-Caticlan and Dapitan-Dumaguete even though their seas can sometimes be rough. No steel-hulled ferry was ever lost in any route in Bicol too except for the Blue Water Princess 2 which is a Quezon ferry going to Masbate and the Rosalia 2, a Cebu craft going to Cataingan, Masbate. There are many, many other routes in the country which has not seen a ship sink even though they are not using a new ship. It is all in the seamanship really. To say a new ships is “safer” is just like claiming a new car will not be involved in a collision.

Some of our HSC companies too are very safe. Oceanjet, the Number 1 now in HSCs, has not lost a ship ever and they did not always use new crafts. Weesam Express also has a perfect record. Even the defunct Bullet Express, the fastcrafts of the Viva Shipping Lines combine and the fastcrafts of A. Sakaluran have perfect safety records. The are a lot of other HSC companies which had perfect records but their service record was short like Star Crafts. Not included here is SuperCat which has lost one.

Between the end of the World War II and 1995 I know of 75 (that is seventy-five) liners which were lost and mainly at sea. That is 75 in only 30 years! Can anybody believe that? So how can I be impressed by liners and international certificates in safety? Or in their being spic and span? The records say otherwise. And believe me I can easily name the 75 as I have my own database about maritime hull losses. This 75 does not even include regional ships like the Boholana Princess which was an overnight ship when she was lost.

The Don Juan and Cebu City were brand-new ships when they were fielded in the Philippines. But they sank in collisions at night. So Pastrana and Cusi be better warned by their boastfulness of their new ships. They better be more humble before shipping companies which have not ever lost a ship.

Newness of a ship is not a guarantee of anything except in shininess.