crests and throughs of the waves

This small shipping company probably won’t be much heard outside Bicol and they might be small but they also carry some weight and they won’t topple easily. Alternately, the vessels of Denica Lines are also listed under the owner Carolyn Cua Sy-Reyes. The home port of Denica Lines is Pilar, Sorsogon and they are among the shipping companies connecting that town to Masbate island.

Denica Lines started as a shipping company by operating big motor bancas. When I say “big” it is because its passenger capacity will run upward to 100 persons. Alternately, if loaded with just cargo it can take in the load of a mini-truck or cargo jeep (well, it cannot be all cement or rice because the weight of that might exceed the DWT of the banca thus sinking it).

The owners of Denica Lines actually started as sub-regional distributors and traders and like in many places elsewhere the possession of own motor bancas is a needed horizontal expansion as it gives flexibility to trading and also generate savings. Usually a shipping operator with its own trading business is much more stable than its competitors. One part might not earn much but then the other part will carry it through. And there will also be no problem with what is called in shipping as “shut-outs” which is the failure to have a cargo loaded. For perishables that could be disaster.

Denica Lines has many big motor bancas. These are fast because those are powered by surplus truck engines and usually it is twin-engined. The total of the horsepower will be over 400 and that will guarantee the motor banca will travel at at least 13 knots which are even faster than the basic, short-distance ferry-RORO which usually travels at only 10 knots. I have seen in Ticao Pass and Masbate Pass that they are really faster. [Well, if used for heavy cargo then all that horsepower will be needed.] Of course, their weakness is the choppy waters and cross-swells. The motor bancas have to time the crests and throughs of the waves and look out for the cross-swells which can damage the outriggers which is called katig locally.

As of now the motor banca fleet of Denica Lines consist of the Lady Regina, Gloria Express, Gloria 7, Gloria 8, Gloria 9, Gloria 10, Phoenix Express I, Phoenix Express II, Hammity and Hammity 2 plus the motor boat Golden Blossom. I would assume that the missing in the series Gloria 1 to Gloria 6 were their earlier motor bancas that are no longer around. The first two, the Gloria Express and Lady Regina are supposedly the fastest in the fleet of Denica Lines including their steel-hulled ships. The two can do at least 14 knots in calm waters.

In 2002, Denica Lines ventured into steel-hulled ferries when the purchased the laid-up cruiser Elizabeth Lilly of the defunct Western Samar Shipping Lines. They refurbished the engines of the ship and it was again reliable. They renamed the ship as the Bikol Express but she was not really fast as she had only a single 550-hp Yanmar Marine engine and her design speed was only 11 knots. The size of the ship was just the equivalent of a basic, short-distance ferry-RORO at 29.3 meters by 6.0 meters and 189 in gross tons.

As a ferry, Bikol Express was not much. She didn’t even have bolted seats, just plastic benches that can be moved. The reason is like some of the motor bancas of Denica Lines is she doubles as a cargo ship with passengers. What cannot be carried by the motor bancas like a truckload or two of rice or cement, she will carry. Her DWT of 100 tons comes in handy for such loads. 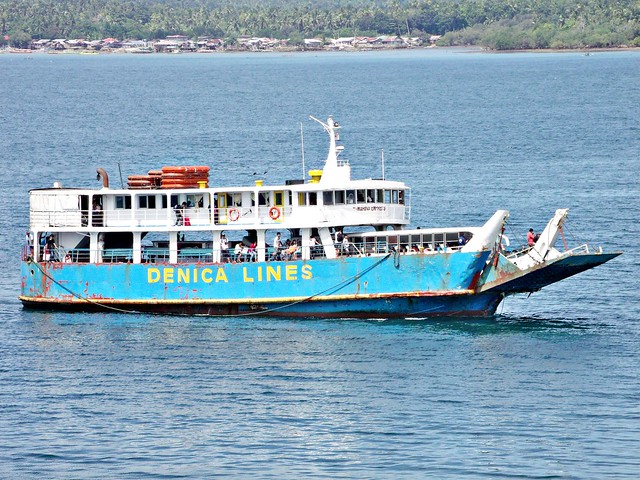 But then ROROs of Montenegro Shipping Lines came and so Denica Lines has to adjust as the trucks instead of unloading their cargo in Pilar just board the RORO now and goes direct to Masbate. They sold the Bikol Express to Batanes Multi-purpose Cooperative (BMPC) and went hunting for a RORO. Again, true to form they settled on a RORO that was not sailing, the Torrijos or Vanessa P2 of the Sta. Cruz Shipping of Marinduque which was already then in the process of winding up their shipping operations having been on the receiving end of the pressure from stronger shipping companies like Montenegro Lines.

The ship was taken from a Navotas yard and she was renamed as the Marina Empress. The Marina Empress is a basic, short-distance ferry-RORO of just 700 horsepower from her single Daihatsu marine engine and with the external measurement of 32.3 meters by 7.8 meters and a gross tonnage of 195. However, like the earlier rumor, her engine was no longer strong.

With Alabat Shipping Corporation of Alabat island going out of operations too, Denica Lines purchased its only ferry, the Odyssey which was the former Starlite Odyssey of Starlite Ferries. This is another basic, short-distance ferry-RORO with a not-so-strong engine anymore. She is powered by a 550-hp Kubota marine engine and her external measurements are 30.5 meters by 7.0 meters with a gross tonnage of 176 which means she is slightly smaller than the Marina Empress. Denica Lines did not bother to rename the Odyssey.

If one considers that Denica Lines has a lot of motor bancas that carry not only people but also cargo it will not look that Montenegro Lines dominates them in the Pilar-Masbate route. The two might have some rough equality since Montenegro Lines has fastcrafts in the route. In glitz and glamour, of course, Montenegro Lines exceeds them.

The owners of Denica Lines are also “well-positioned”, as they say. The husband was the Mayor of Pilar until 2016. In the May elections of this year Carolyn Cua-Sy Reyes was elected the Mayor and whitewashing her five opponents with 84% of the votes going to her. Well, it seems they are really respected in Pilar (in 2013 the husband also whitewashed his opponents). I do not know Pilar that much but from what I know it does not have the bokong of Leyte nor the use of muscles and influence in gaining an advantage for ship operations or in locking out the opponent.

Such is Denica Lines.