The Graceful Stars is one of the most recent ships of Roble Shipping Incorporated, a major regional shipping line serving the ports of western Leyte (which I wonder why it is not a separate province as it is economically viable on its own, it has a ready capital in Ormoc and it speaks a different language from eastern Leyte) which sailed just in 2015 although she came to the Philippines earlier (as she stayed long in the Roble wharf in Pier 7 of Mandaue). As refitted, the Graceful Stars is an overnight ferry-RORO which means she is fitted with bunks, the main distinction of overnight ferries from the short-distance ferries (well, aside from the size, of course). 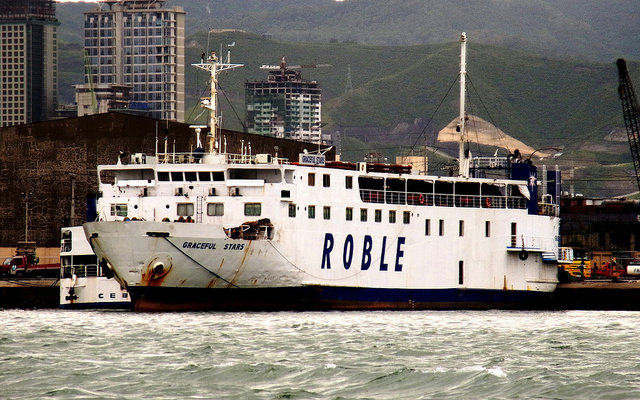 I look at Graceful Stars from the evolutionary point of view of Roble Shipping. This company started from the Marao, a converted cargo ship and then from that humble beginning they were true with a humble path to greatness by first taking in the discards of the other shipping companies of Cebu and by concentrating on their strong route, the Cebu-Hilongos route which is now already a major route and a gateway to the province of Southern Leyte. Actually eight discards from other shipping companies passed through the fleet of Roble shipping (the Don Bonifacio, the first Guady Cristy, the second Guada Cristy, the Hilongos Diamond, the Hilongos Diamond – II, the Queen Belinda, the Leyte Diamond, and the Cebu Diamond) and that list does not even include the May Josephine, the former Surigao Transport which was more of a cargo ship too like the Marao. A lot of discards but those established what Roble Shipping is today. And there is nothing wrong with the path of Roble Shipping, they should be proud of it because what is important is where they ended up with and where they are now. Actually Roble Shipping in its early days even acted as the conservator of old ferries that might have ended up earlier in the breakers if they have not shown interest in them especially since those were already the obsolete cruiser ferries then (more difficult to load and unload but Roble started in arrastre anyway).

From that simple and humble beginning, Roble Shipping suddenly landed the Heaven Stars which was a former cruiseferry in Japan (cruiseferries are the ferries in Japan that had good amenities and accommodations compare to ferries that were more inclined to the taking in of rolling cargo). Heaven Stars was big for an overnight ferry and she had the amenities of a multi-day liner (I thought then Roble would use her for their approved route to Nasipit). Roble Shipping also snared the Wonderful Star, a basic, short-distance ferry-RORO which unfortunately was lost early (Note: that ferry is different from the current Wonderful Stars). The two ushered the entry of Roble Shipping into the age of ROROs, the successor type to the obsolete cruisers.

But still Roble Shipping was operating a mixed fleet as shown by their acquisition of the Ormoc Star, a cruiser ferry that became a loved ship in her namesake port and city. Then the Wonderful Stars arrived for the company and save for the Heaven Stars she was the most beautiful ship in the fleet of Roble Shipping, and an embodiment of what a moderately sized overnight ferry should be.

Next to come for Roble Shipping was the Beautiful Stars which was just a little bigger than the basic, short-distance ferry-RORO before a slew of another discards from other shipping companies came which became the Joyful Stars, the Theresian Stars, the Blessed Stars and the Sacred Stars in their fleet. These discards needed practically needed no more refitting from Roble Shipping except maybe in the engine department. In modern shipping companies it is Roble Shipping which is the master in making discarded ships work.

The Wonderful Stars, Theresian Stars and Joyful Stars were significant for Roble Shipping because that firmly established the shipping company in the 70-meter class of ROROs (okay, the Theresian Stars is 0.3 meters short of 70 meters). Let it be noted that the Heaven Stars was 89 meters long and that will show the jump then made in size by Roble Shipping when they acquired her. These overnight ferry-ROROs might have been smaller than what Cebu Ferries, Trans-Asia Shipping Lines or Cokaliong Shipping Lines have or had (and to a certain extent George & Peter Lines too) but let it be noted that Roble Shipping is only operating routes to Leyte (until recently) and not to Mindanao unlike the other mentioned ones. And so Roble Shipping actually was leading then what can be called the second pack of Cebu ferries except that Lite Ferries’ fleet exploded later in size courtesy of the wand of a patron saint. 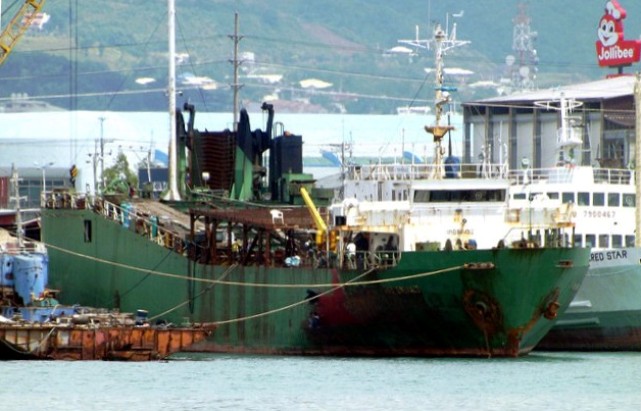 The Graceful Stars is the former ship of Toyama Kaigai Boeki Shipping named the TKB Emerald and was classified as a Vehicle Carrier in Japan or which is that used in ferrying vehicles in relatively short distances. This is different from the Pure Car Carriers which ferry new vehicles between countries or the Cargo ROROs or RORO Cargo ships which are bigger, have a bigger capacity and go longer distances and even to another adjacent country. A Vehicle Carrier has a limited accommodation for passengers which are usually the crew or drivers of the vehicles and that is their difference over the ROPAXes.

As such converting a Vehicle Carrier to a ROPAX or RORO-Passenger ship means a lot of steel still has to be added into the ship in the form of additional decks and passenger amenities and accommodations. And that is the difference in the conversion if the original ship is a RORO Cargo ship for in that type of ship not much steel is still needed and in some cases steel has to be cut to pave way for windows.

The TKB Emerald took long in conversion and much longer than the Cebu Ferry line of ships (about four years from 2011). With a surplus of ships Roble Shipping didn’t need to rush and the refitting of Joyful Stars and Theresian Stars took precedence (otherwise the two would have rotted). The conversion won’t also be that straighforward as the TKB Emerald has a sloping ramp which slid down to the car deck and two passenger decks had to be fitted (single passenger decks are just for the basic, short-distance ferry-ROROs). And I have heard then too and confirmed it with the databases that the engine of the TKB Emerald was on the small side at just 1,370 horsepower and a single engine at that when ferries of this size normally have two engines with 2,000 horsepower as the very minimum (many even pack 4,000 horsepower or more). Adding lots of steel also slows down the ferry because of the added weight. With this and even with the aid of turbocharging one cannot expect TKB Emerald to run fast. However, one of the strengths of the TKB Emerald is a long and good three-piece ramp which is excellent for loading and unloading vehicles including container vans mounted on truck-trailers 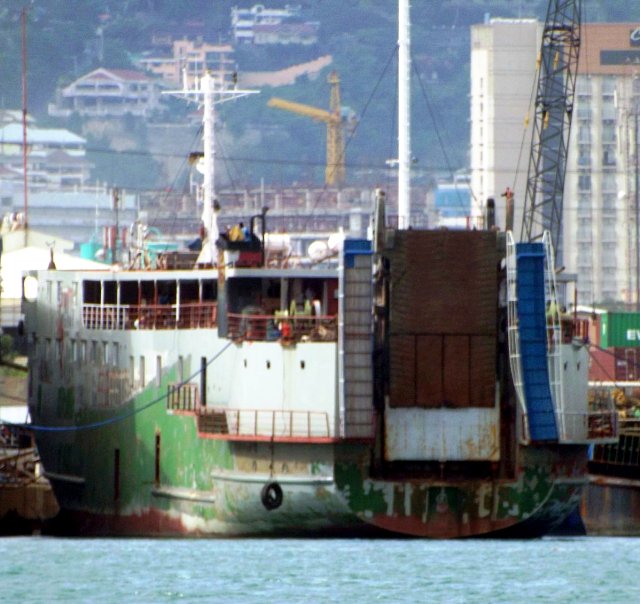 The Graceful Stars is 73.7 meters in length over-all with a breadth of 13.6 meters and a depth of 7.6 meters (which is on the deep side which means greater stability) and an original Gross Tonnage (GT) of 1,953 tons and an original design speed of 11.5 knots (which was not bad then but then a lot of steel has to be added to her in her conversion). She was built by Shin Kochi Jyuko Company Limited in Kochi, Japan in 1984 with the IMO Number 8314312. The ship is of steel construction and had a stern ramp leading to the car deck.

As rebuilt she already has two passenger decks with a little squat appearance (but not looking bad) as the bridge determined the height of the superstructure unlike the Cebu Ferry 1 of Cebu Ferries Corporation. This is not really unusual as Cokaliong Shipping has low-looking ferries too. The bridge was lengthened up to the sides as the original bridge is the small type. 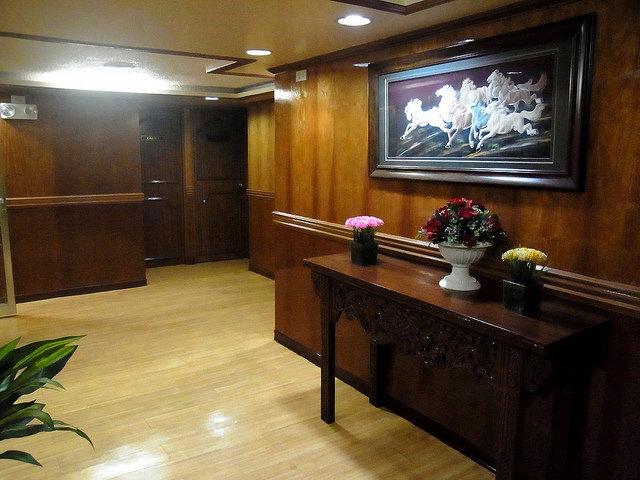 Cabins and Suites of Graceful Stars (does it still look like a Vehicle Carrier?)

As rebuilt the Gross Tonnage (GT) of the ship went down to 970 which is an under-declaration with a Net Tonnage (NT) of 660. The ratio of the NT to the GT is suspicious. I have yet to learn of the passenger capacity of the ship.

When I rode with her to Baybay, her usual route, our ride was comfortable and it did not disappoint. The ship was clean and the aircon was cool. Our trip to Baybay took eight hours and for a distance of a little under 60 nautical miles that means our cruising speed was some 8 knots or so. I heard the maximum she can do is 10 knots although when first fielded I heard tales of late arrivals as in a breakfast docking already from a 9pm departure in Cebu. I heard most of the passengers did not complain as that is still a good arrival and they appreciated the superior amenities and accommodations compared to the earlier ships that served the Baybay route. Meanwhile, her competitor Rosalia 3 of Lapu-lapu Shipping with 3 engines and speedy for a small overnight ferry sped up her passage as that is all she can improve from being an old ferry of fishing vessel origins. To passengers still going far her 3am arrival will matter (her number matches well with that and so renaming her to Rosalia 3am to highlight her strength might be in order, pun intended).

But right now the Graceful Stars lords over the Baybay route and the funny thing is she is even better than the ships fielded in the premier Ormoc route which costs significantly more. And it is doubly funny because for nearly the same distance the Ormoc ships cost much more than the Baybay ships which turn out to be a bargain. For the P510 Tourist fare of Ormoc one can have a more luxurious and fresher-smelling ride in Graceful Stars for P380 and the difference will be enough for a Jollibee breakfast just outside the port gates of Baybay and the change will still be enough for a bus ride to Ormoc. Baybay by the way is a good alternate point of entry if one is headed to Tacloban or to any Samar town. It is good that she is in Baybay because if she is in Hilongos because if she is in the latter her lack of speed will show because the port is gateway to the Southern Leyte towns and so a pre-dawn arrival is preferred there so the passengers will arrive at their homes at breakfast time.

Rosalia 3 and Graceful Stars in Baybay

It seems Roble Shipping made a correct bet in acquiring and refurbishing the Graceful Stars. In the Baybay route her lack of speed does not easily show as passengers don’t normally grumble unless the arrival is already past breakfast time already. Many actually don’t want to be bothered from sleep of the anchor dropping and the shrilly announcements in the public address system and the bustle of passengers moving and the porters coming. And her superior accommodations means she will lord over Baybay for a long time that I fear that if other older ships of Roble are rotated to Baybay (like the Joyful Stars and the Theresian Stars) the passengers there might grumble with the change.

It seems the former TKB Emerald has already found a home in Baybay and it seems she will be in there for a long time and dominate that route.