The ferry Maria Matilde of Montenegro Shipping Lines Inc. (MSLI) of Batangas was in the news lately because of a mishap she suffered while in transit from Odiongan port to Romblon port when she tried the hardness and strength of her bow against what seems to an overhanging rock and she lost. Actually she was lucky because had there been more clearance below the overhanging rock, the bow would have been cleared and instead it will be the bridge of the ship which will strike the rock and it would have been a good comeuppance for her negligent bridge crew who have been too good in making ridiculous excuses after the accident happened. Scores of passengers have been hurt in the accident necessitating the bringing of several to hospitals. It was also reported that four vehicles aboard the ship also sustained damages (maybe it jumped the wheel chocks). Well, imagine a ship probably sailing at 12 knots or over 20 kilometers per hour coming to a halt in a split second without warning. Many would be hurtling forward then, unplanned and unwarned.

The Maria Matilde was once thought by some as the biggest ferry of Montenegro Lines but actually it is not true as their ferry Maria Xenia from Shipshape/Safeship is actually a little larger than her. Whatever, when the Reina del Rosario came from Trans-Asia Shipping Lines of Cebu with its 82.8 meters length and over 2,000 of gross tonnage, there was no assertion anymore that the Maria Matilde was the biggest ship of Montenegro Lines and so the former Cebuano ship won.

Actually, the two ships are familiar with each other. Once upon a time, the Maria Matilde might have been the most distant ship of Montenegro Lines in terms of fielding. When she was first sailed in 2005, she was on the Cagayan de Oro-Cebu-Iloilo-Puerto Princesa route (imagine a route that long). Now I just can’t remember if the Surigao-Siargao ferries of Montenegro Lines came earlier but probably not. So, the Maria Matilde was an overnight ferry from the very start and might even qualify technically as a multi-day liner although it is really an effort for a passenger bound for Puerto Princesa as the ship spends the daytime in port waiting for the next leg of journey in the night. Well, that could be a lot of free tourism for the more adventurous but unlike true liners of the period then they will not be fed while on port.

A few years before the Maria Matilde came, the Negros Navigation Company (NENACO) and later through Jensen Shipping tried the same route and it bombed. So I was wondering if Montenegro Lines knew a secret that Negros Navigation did not know or if they have a better formula. After all in the different legs of the route the Maria Matilde will be experiencing tough competition especially in the first two legs and in the last leg (the Iloilo-Puerto Princesa leg) the traffic between its two ports is not really heavy and actually Montenegro Lines is already serving that route aside from the original holder of the route, the hardy survivor Milagrosa Shipping Lines.

Apparently, Montenegro Lines did not know any better and they bombed out too. First, they cut the route to Cagayan de Oro. That is the prime Visayas-Mindanao route and competition there is very tough with the top competitors even fielding former liners aside from real liners from Manila holding the Manila-Cebu-Cagayan de Oro route (like the former SuperFerry 12 that is now known as the St. Pope John Paul II which is still plying the route). The Maria Matilde was severely outclassed in modernness of the competitors, in size, in the amenities and accommodations and in the speed when some can do almost twice her speed. And in passenger service there is almost no way for them to beat the liners (Montenegro Lines was never known for service especially since they have never experienced liner sailing). And the Maria Matilde does not even offer free food as that is the domain of the liners but not of the Batangas ferries. Additionally, some passengers bound for Iloilo or Bacolod can just take the liners doing the Cagayan de Oro-Iloilo-Manila or the Cagayan de Oro-Bacolod-Manila routes. If the passenger is still bound for Puerto Princesa he or she can just transfer to an Iloilo-Puerto Princesa ferry. In the Cebu-Iloilo leg the Cebu shipping companies also have good ferries and again that is another top route from Cebu. I felt then that the Maria Matilde was in a cul-de-sac especially since I know the Batangas people don’t know how good are the top overnight ferries of Cebu (all they know is beat the crappy Viva Shipping Lines standard).

In a span of a few years, Montenegro Lines gave up and brought back the Maria Matilde to Batangas to do their MIMAROPA Region overnight routes like their route to Romblon from Batangas. There, the Maria Matilde is not outclassed as Batangas barely know overnight ferries and in fact just have a few and it is one area where ROROs without bunks are used in night routes and so people use the benches as “bunks” leading to complaints by some and the crew there is not good in instilling discipline and unlike in the Visayas-Mindanao region the passengers are not averse to appropriating the whole bench for themselves. Well, that is the consequence of having no proper bunks. The Maria Matilde has been one of the longest overnight ships now in the Romblon route together with the biggest ship of Montenegro Lines, the Reina del Rosario. If they know each other in Romblon, they actually knew each other before in Cebu when the latter was still with Trans-Asia Shipping Lines.

The Maria Matilde is a not a new ship by any means and she belongs to the class that the haters of old ships love to jeer (because they have vested self-interest). She actually doesn’t show her age although she was built way back in 1971 or 46 years ago (well, Montenegro Lines is really good in refurbishing and maintaining old ferries). Her builder is the Taguma Zosen in Innoshima, Japan and she carries the IMO Number 7106126 which indicate when her keel was laid up. 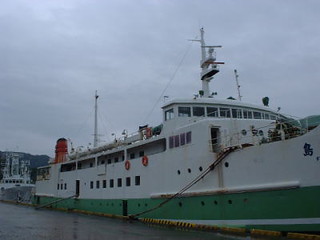 Originally, she was known as the Ferry Goto of the Kyushu Shosen KK of Nagasaki, Japan. She must have been doing the Nagasaki to Goto route as her name is an obvious giveaway. As such she might have been familiar with the Ferry Fukue which also came to the Philippines that is now known now as the Filipinas Iligan of Cokaliong Shipping Lines Inc. (that is if she was sailing to the southern island of Fukue). However, when that ship came the Maria Matilde was no longer in Cebu.

The Maria Matilde has a steel hull and had car ramps at the bow and at the stern that led to the single car deck. She already has the modern semi-bulbous stem and the usual transom stern of a ROPAX (RORO-Passenger) ship. Her length is 73.6 meters with a beam of 14.3 meters (which is only declared as 12.0 meters here but international databases says otherwise and 12.0 meters breadth are for the smaller ferries) and a depth of 4.8 meters. Her declared gross tonnage is 1,266 which is just about the same as her original gross register tonnage of 1,262 (and that is after adding an additional passenger deck). Her declared net tonnage is 693 with a passenger capacity of 832 (that includes the old Jet Seater class of the ship) in two-and-a-half passenger decks. She is powered by two Hanshin marine diesels with a total of 4,000 horsepower and her original top speed (the design speed) was 16 knots (lately she is still capable of a cruising speed of 13 knots which is not that far off from her design speed). Hanshin is not a common engine for passenger ships.

Unlike most Batangas passenger ships, the Maria Matilde is equipped with two stern passenger ramps (in Batangas, in general, the passengers enter and exit through the car deck and ramp heightening the chance on an accident). Part of the car deck was once used converted for passengers but it was removed now. The ferry also has a forecastle and small poop deck aside from two funnels which signifies two engines.

The Maria Matilde might have remained an obscure ferry doing its job silently except when she was thrown into ignominy when she hit that overhanging rock last September 25, 2017 in Calatrava town of Tablas island, Romblon when the ferry was on the way from Odiongan to Romblon town (some reports said she grounded but that seems not to be the case as the stem of the ship is undamaged). Minor accidents and incidents are part of a ship’s life but the unusualness of the accident put this good ferry in a bad light due to the incompetence of the bridge crew. Nowadays, with pocket Wi-Fi and smartphones keeping lid on accidents on passenger ships with casualties is hard to do as it hits the public immediately. The only similar accident to this that I know was when the flagship of Escano Lines, the Fernando Escano II rammed the concrete battleship island in the mouth of Manila Bay in 1969 that also damaged the ship’s bow.

The crew when asked by media offered many lousy, unbelievable excuses. One said there was a steering failure (but then the ship was able to dock later in Romblon port and offload not only vehicles and passengers but also the wounded). Another said there was failure in the GPS instrument of the ship (but then there should still be nautical charts in the bridge and navigators that constantly plot the position of the ship). There is no question that there is bad visibility when the incident happened and it was still dark as it was just dawn yet and raining. But then if the radar is working and the bridge crew was not sleepy they should have seen that there was an obstacle ahead. Actually, the most likely thing that happened is the ship drifted because of the currents and the bridge crew failed to notice and correct it. In terms of familiarity of the course, the ship cannot give it as an excuse as they were on their regular route (and what are nautical charts for anyway?). Now, was there even a look-out or the look-out was busy stirring his cup of coffee?

With the accident, the length over-all of the ship shortened (although they will bring that to the shipyard for repairs and that is easy to remedy). However, the reputation on the crew and the ship is harder to repair now. With the Net, a search on Maria Matilde will always lead back to the accident in Romblon and that will be for years on end (what a disgrace). If we can search Fernando Escano II’s accident of almost half a century ago, imagine how long Maria Matilde’s accident will be searchable even if she is gone already. I don’t know if it is already time to change the ship’s name.

Credits to The Manila Chronicle and Gorio Belen

Even then this ship is still a reliable ship that is capable of sailing many more years unless some government device is approved to cull old ships like that signed agreement to cut carbon dioxide emissions (practically no old ship of ours will survive massive carbon cuts unless re-engined but that is not cheap). Her owner Montenegro Lines is really good in prolonging the lives of their old ships and will even resort to re-engining if needed (we really love and value old ships, don’t we?).

Now if only her crew had been more careful.