For the past five years or so, I often notice that some people with vested interest in shipping always raise the issue of the age of our ferries imputing that our old ferries are not safe. That include their friends who parrot their line but actually have no knowledge whatsoever of local shipping. One thing they have in common is their lack of objectivity and empirical knowledge of our shipping. They are the type of bashers of our shipping who will pass on lies to “justify” their position. The bad thing is they have access to media which will simply broadcast what they say or worse simply reprints “praise releases”. And the baddest is millions of people who have no knowledge of shipping are fooled by them. 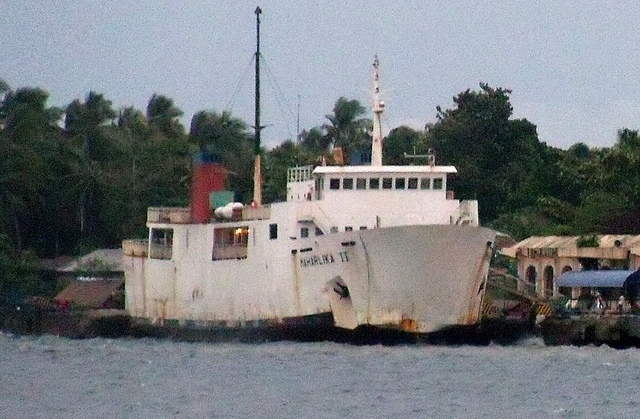 MARINA (the regulatory agency Maritime Industry Authority) itself in a very recent consultation with shipping company and shipyard owners admitted they have no study linking maritime accidents to the age of ships. I am not surprised here because I know MARINA has no database of our shipping losses and accidents. I guess even if they study the findings of Board of Marine Inquiry (BMI) proceedings on maritime accidents, they will be hard put to correlate the accidents to the age of ships because the BMI generally proceeds with facts on records and most conclusions point to human or navigation error.

Major accidents that resulted in hull losses, the type that generally provoke ignorant public outcry, generally can be classified into three:

Beaching/grounding that resulted in complete total loss or CTL

For the last 30 years from 1986 when radar was already generally available and weather forecasting was already better, capsizing/foundering/sinking composed about 45% of the cases of ship losses while fire and explosion composed 40% of the cases and the remaining 15% were due to beaching/grounding that resulted in CTL. In the sample, the motor bancas and small motor boats were excluded but batels and Moro boats are included. But if they are included it can be easily seen that most of them were lost in bad weather and few of them are over 20 years old (wooden-hulled crafts don’t last long anyway) and so it is hard to connect their loss to age.

In capsizing/foundering/sinking, most of them can be connected to the prevalent bad weather or storm. Such cases of losses are also hard to connect to the age of the ship especially since with hull scanners replacing the hammer in testing the hull integrity of the ships few sink now because the ship developed a hole while sailing. Well, capsizing/foundering/sinking is even easier to connect to the hardheadedness of their captains and owners. Their only connection to age is captains and shipping owners are generally old, pun intended.

In fire and explosion, the age of the ships can be suspected to be a factor. But so do simple lack of maintenance and lack of firefighting capabilities. A relatively new ship with poor maintenance will be mechanically old especially if parts are not replaced. An old ship with replacement engines and bridge equipment is mechanically newer like Mabuhay 3 that although built in 1977 was modernized in Singapore when she was lengthened. Understand too that some of the fires happened in the shipyard or while undergoing afloat ship repair (ASR). Fire is a risk while doing hot works like welding in a shipyard and many times this was what caused the fire and not the age of the ship.

In beaching and grounding, this is almost the province of bad weather and bad seamanship and navigation. The only connection to age here is when the navigator used old and obsolete nautical charts, pun intended again. The age of the ship practically has no connection to this unless some machinery broke like in Baleno 168 when the shaft broke free. By the way, the total number of ship losses here I consider as ship losses is over 75 ferries. Not included are other types of ships like freighters, tankers, container ships, barges and tugs.

The Starlite Atlantic floundered while maneuvering in a strong typhoon

But these people with vested interests and that even includes MARINA would not dwell on the actual causes of ship losses. What they just is just an administrative fiat where ships will be phased out after a certain age (30 or 35 years) irregardless of the actual condition of the ship. They cite “safety”. But what they actually want is to have the whole field for themselves because they are the ones which have new ships. They do not want fair competition. What they want is to simply banish the competition.

For me, because I believe in laissez-faire competition, it should be “Let the market decide”. If they think their ferries are better then let them charge higher or with a premium (as anyway they need to amortize their ships). And see how the market reacts. That is how it is in the deregulated areas for buses. The better buses charge higher, of course, and why not? The market then decides which they want or which they can afford. Like my friend in Naga. When business is good he might take a premium Lazy Boy bus. But when business is slow, he will settle for the very common aircon bus. It should be that way in shipping too. Please no administrative fiats. It is simply not fair. If you want to argue about the age of the ships then put forward a worthy scholarly study that have gone through a panel of knowledgeable shipping persons (and please no landlubber Ph.D’s).

In Youtube, there is a Captain who said most of the accidents are caused by human error. I agree fully (and please invite him to the panel which will check the scholarly study). It is just like in a car, a truck or a bus. It is not the age of the vehicle which will be cause of the collision or it falling in a ditch or running over a pedestrian. It will most likely be human error on the part of the driver (unless there was a mechanical failure which can also be attributed to poor maintenance).

In 2011, I had a friendly discussion with a Japanese ship spotter who is very knowledgeable about Philippine shipping. I was dismissive of these ships having these expensive P&I (Protection and Indemnity) insurance and being classed by classification societies affiliated with IACS (International Association of Classification Societies). I asked him a conondrum to please explain to me why ferries in the eastern seaboard of the country never sank while sailing (that was true before the Maharlika Dos sank in 2014). The ferries there are old, some even have problems with their painting, none have MMSI or INMARSAT, nobody has heard of P&I and IACS and yet they do not sink since steel ferries arrived there in 1979 (a total of 22 years) while the proud SuperFerry lost the SuperFerry 3, SuperFerry 6, SuperFerry 7 and SuperFerry 14 in just a span of a few years. I was needling the guy a little since he was a big SuperFerry fan. He was speechless and can’t provide an answer. So I told him P&I and IACS might look good in Japan but here evidently it does not translate to greater safety, empirically and arguably. So then why are these people with vested insterests pushing for IACS classification when it actually means nothing here? Hell, no ship sank in the Dumaguete-Dapitan route, the Bacolod-Dumangas route, the San Bernardino routes, the routes to Catanduanes, etc. There is no IACS-classificated ships there except for the recently arrived FastCat. There is also no lost ship in Roxas-Caticlan and probably the only IACS-classed ships there are the new Starlite Ferries and FastCat. So that means an IACS classification is not really necessary. If we proceed empirically then higher classification should only be required by route and by shipping company. If a route or a shipping company has no major accident then just require them the usual local classification because it proved it was enough, isn’t it? Then require IACS or even higher classification for the likes of 2GO, Archipelago Philippine Ferries and Starlite Ferries because it had major accidents already in the past. Now isn’t that simple? Why should the curse be suffered by shipping companies which had no major accidents? Is that fair? And the irony is that those who prate safety and which called for the throw-out of old ships are those which had history of sunk ships already. 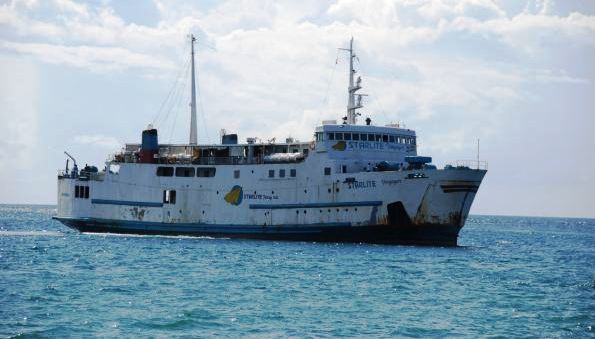 Report says she grounded, was declared CTL and broken up (Pic by M. Homma)

The eastern seaboard with more ships than the fleet of Starlite Ferries or Archipelago Ferries only lost two ships until today and one of that was when a ferry was moored during a typhoon and therefore not sailing (the Northern Samar) and the other one was the Maharlika Dos of Archipelago Philippine Ferries. Now the fleet of one of these guys has already lost two, the Starlite Voyager and the Starlite Atlantic when his company started operations just in 1996 as they claimed. Eastern seaboard ferries have been in operation since 1979, much earlier than his. The only eastern shipboard ferry lost while sailing belongs to another loud guy with vested interest and his ship was the Maharlika Dos which sank because it wallowed for many hours without power when his Maharlika Cuatro was just nearby and failed to help until Maharlika Dos sank with loss of lives.

Actually safety and seamanship are not the result of paid certificates. Just like there is no presumption one is a capable and safe driver after getting a driver’s license or a car is safe because it was registered in the Land Transportation Office or a bus is safe because it was registered in the LTFRB. Just like the Supreme Court said in a recent decision a ship is “seaworthy” (because it has seaworthiness certificates) until the moment the hull the develops a hole and sinks. Certificates actually confer nothing in the true world of Philippine shipping.

In Typhoon “Ruping”, the strongest typhoon to visit Cebu in history in 1990 a lot of ships sank, capsized or were beached. The typhoon did not ask the ships their age. Ditto when Typhoon “Yolanda” struck in 2014 with the loss of many ships too all over the country. Typhoons are not selective with regards to age. Unless one will argue the anchor broke because of age.

But these people with vested interest peddle lies that in Japan ships after reaching twenty years of age are retired. That is simply not true. Even the Japanese ship spotter said that. I once thought the 35-year limit proposal was a European Union standard. Not true also. They do it by actual inspection or classification of ships. If the ship has too many violations it is detained until corrections are made. It stops sailing when corrections can no longer be made or it is already too expensive to be economical and when that happens the ship is sold to the breakers or a Third World country. The process there is objective unlike the proposed arbitrary rule here to base it on age. 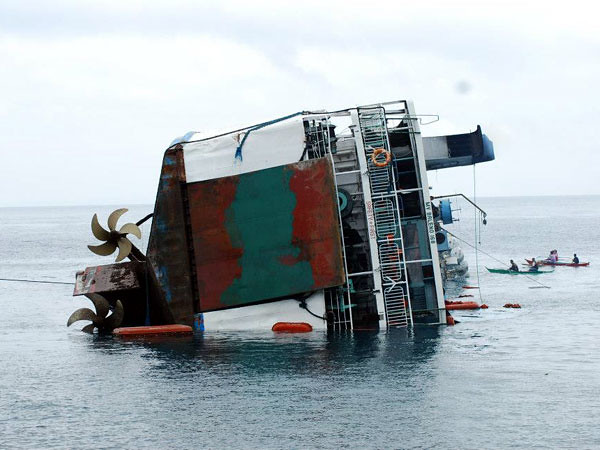 I just cannot understand these people resorting to lies just to promote their product. I thought in the past these were subject to boycott. The problem with the Philippines is there is no Fact Check like in the USA. Here things are reduced to “batuhan ng lies”. I am just glad in our society, the PSSS (Philippine Ship Spotters Society) that has never been the rule or custom because we always stick to the facts and TO the truth.

And that is the raison d’etre for this article. I do not like liars nor do I like people who wants to pull a fast one or those who try fool people or hood their eyes.