Just after Super-typhoon “Yolanda” in 2013, long lines of trucks formed in the Surigao Strait crossings connecting Leyte and Mindanao when the relief and reconstruction efforts were in full swing. I thought it was just a temporary phenomenon brought about by the typhoon destruction but the truck queues persisted after that (but the buses were not affected by that in the main because bearing passengers they always have the highest priority in boarding short-distance ROROs). Cargo RORO LCTs requested by the government helped in transporting trucks months after the super-typhoon passed until the situation more or less returned to normal. 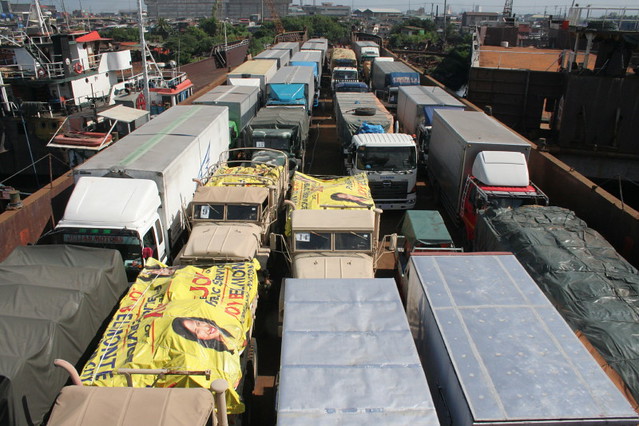 But further developments showed there was really increased vehicle traffic already in the Liloan-Lipata and Benit-Lipata parallel routes that connect Leyte and Mindanao. So in the recent years the Surigao Strait saw more short-distance ferry-ROROs sailing the north-south direction. These included new players plus a dedicated Cargo RORO LCT plying the route and carrying trucks. With such there is a palpable increase in the sailing frequencies between Leyte and Surigao.

The once-oldest ferries in the route, the Maharlika ferries are now gone after the sinking in 2013 of its Maharlika Dos off the southwest tip of Panaon island when its engines conked out and she was swamped by waves when no help came after she drifted for hours. Archipelago Philippine Ferries, the owners of the Maharlika series then stopped operations until they were able to bring their new catamaran-ROROs which are part of the FastCat series.

Now these new type of ROPAXes (RORO-Passenger ships) hold different time slots. Even with just a single ferry which is currently the FastCat M7, it can do three round trips in a day with its superior speed (17 knots) and favorable passenger and shipper response. The FastCat is gaining popularity in the route by offering the same rates but employing a brand-new craft with the best passenger service in the short-distance routes together with the legendary 2GO liners. They are practically the horse to beat there now from being derided in the past because of the lousiness of their Maharlika series.

FastCat still uses the Liloan-Lipata route even though Lipata port was damaged by an earthquake in 2016 which forced other ships to use the other port of Surigao City which is Verano port. This is the port that caters before to the passenger ships from Cebu (there are no more liners from Manila) and freighters plus different crafts to Dinagat, Siargao and various small islands off the Surigao mainland.

Giving them stiff competition because it enjoys a short route are the ferries of Montenegro Shipping Lines Inc. (MSLI) which uses the Benit port exclusively to sail the Benit-Surigao route. Normally, this shipping company deploys two big short-distance ferry-ROROs in the route and these are usually the sister ships Maria Felisa and Maria Vanessa. The Benit-Surigao route is only a little over a third of the Liloan-Lipata route but the MSLI rates are only a little less than Liloan-Lipata rates and so MSLI enjoys greater profitability than competition and I wonder why MARINA allows the shipping company to prey on the passengers and vehicle owners when I thought they are the maritime regulatory agency (and they are regulating what and are they for the shipping owners or for the passengers and shippers?).

A newcomer on the route is the Southwest Premier Ferries which is using a brand-new ferry, the SWM Stella del Mar which is a sister ship of the new vessels of Starlite Ferries of Batangas. This company promised several trips in a day but I wonder how they can live up to that if they don’t have enough rolling cargo as many of the vehicles there are already locked to their competitors (well, they can offer discounting to attract the clientele of competition). Southwest Premier Ferries is just a few months on the route.

A Bicol shipping company has also invaded the route, the Sta. Clara Shipping Corp. which rotates some of their bigger ships in the route and sometimes it uses a ferry of its legal-fiction company Penafrancia Shipping Corp. As of the time of this writing they are using the ship King Frederick but with two ferries from Japan being refitted right now in Nagasaka Shipyard in Tayud, Cebu, it is probable that one of the two might be assigned to their Liloan-Surigao route to better handle the challenge of the new ferries in the route.

Another old shipping company still plying the route through Liloan and Surigao is the Millennium Shipping Inc. which uses its old and slow Millennium Uno, a ferry with over half a century of sailing experience. At several times in the past this ferry was thought by observers to be already gone only to rise again like a phoenix and one of the recent episode was when they voluntarily stopped sailing after the hot eyes that came with the sinking of the Maharlika Dos (she has her own deficiencies after all). When the ruckus died down the ship quietly went back to sailing with some cosmetic changes and engine improvements so that from 4 hours plus she can now sail the 38-nautical mile distance in a little over 3.5 hours.

Added to that mix of ships is a Cargo RORO LCT, the GT Express I of GT Express Shipping which was once connecting Negros and Panay islands through the Banago-Dumangas route. This LCT actually uses the Liloan municipal port which once had overnight ships to Cebu and not the Liloan Ferry Terminal. The two ports are just a kilometer apart in a very small bay. As a Cargo RORO LCT, the GT Express 1 can only take in trucks.

One shipping company that is gone now in the route is Asian Marine Transport Corporation (AMTC) which stopped their sailing when they found themselves lacking ferries because of mechanical failures on their other ferries. It is a loss and a perplexity because they fielded in the route the first decent ferry when all that was available 15 years ago were the lousy Maharlika and Millennium ferries. I don’t think they will come back in the route because they still lack short-distance ferry-ROROs.

So right now 6 different ROROs ply the routes across Surigao Strait from 5 different shipping companies and total of about a dozen voyages in a day with a capacity for over 200 assorted vehicles each way excluding motorcycles plus a passenger capacity of more than 4,000. Such is the available capacity now on the route which is a far cry from that of a decade ago when shut-outs happen.

One reason from the increased demand in the route is Surigao Strait became a favorite crossing point of vehicles to or from Cebu of vehicles not only from CARAGA Region but also from Southern Mindanao as Northern Mindanao is not a viable entry for the rates there are very high. This is aside from the fact that that strait is the old crossing point of buses and trucks coming from Luzon and going to Mindanao.

“The Saddle” dominates the view of the Surigao Strait crossings

The competition in the route might be heating up for now with some threatened over-capacity but in a few years, with the growth in traffic being shown by the route then maybe more ships and frequencies will again be needed. Actually there is a report that a new port will be built in San Ricardo east of Benit and it will be connected to the eastern coastal road being built in Panaon island that will bypass the mountain pass called “The Saddle” which gives some trucks problems because of the inexperience now of drivers in mountain passes.

Maybe by then there will also be more routes across Surigao Strait in the future. More is merrier and normally that redounds to the benefit of the passengers and shippers if only MARINA will do its job. Let us see it then.