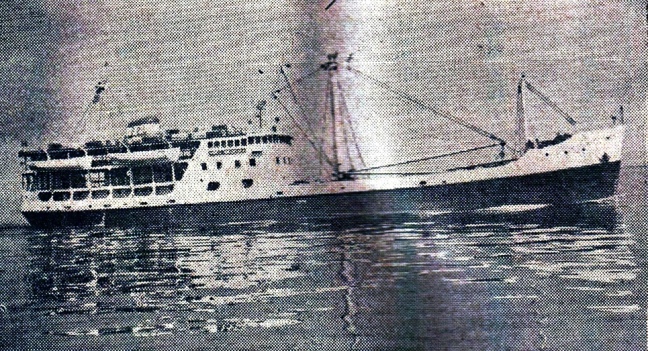 Right after World War II, the former FS ships of the US military dominated the Philippine shipping industry. FS means “Freight and Supply”. Their earlier designation was “FP”. The FS series is one of the many types of transport-supply ships used by the US armed forces in World War II.

The FS ships proceeded from one basic design, with variations. There were many contracted shipbuilders in the US that built them. Higgins Industries and Wheeler Shipbuilding were the dominant FS shipbuilders. The FS ships that reached the Philippines were about 54 meters in length with a beam of 9.8 meters. It is about 560 gross tons. Many manufacturers supplied engines for the FS ships from the basic General Motors-Cleveland design.

The bulk of the FP/FS ships were built in the year 1944 and a few were built in 1945. Most were built for the US Army and it was mainly employed in the Pacific theater of operations of the US armed forces. That was one of the reasons why so many FS ships found its way to the Philippines.

As military surplus ships which the US no longer needed anymore after the war, the FS ships were plenty, readily available and very cheap. Many were just given as reparations for the ships requisitioned by the US during the war or were replacements for the ships that were deliberately scuttled during the early phase of the Pacific war to prevent them from falling into enemy hands.

Some of FS ships were used unconverted and served as cargo ships carrying a few passengers. Most, however, were converted to true passenger-cargo use. About half were later lengthened in Hongkong and Bataan shipyards and some were even re-engined. Aboitiz Shipping Lines and William Lines were notable for this.

Converted and/or lengthened FS ships added passenger decks and accommodations. But compared to later standards those were still very spartan and meager. Third-class was really hardship class as one has to sleep among the cargo in the lowermost deck which is hot and noisy as it was just above the engine deck. Second class accommodations meant foldable cots and being located a deck above third class. First class is usually located in the bridge deck and is not accessible by the other classes. However, for all classes air-conditioning is non-existent.

Originally running at 12-13 knots, converted FS ships generally ran at 10-11 knots and sometimes even slower as they aged and got heavy. A route in general had many ports of call with long in-port hours due to the slow loading and unloading operations using porters and booms. Southern Mindanao voyages took two weeks to complete, round-trip. Visayas and northern Mindanao routes took one week. In a few short routes to Panay, Palawan, Mindoro, Romblon and Marinduque, a twice a week sailing was possible.

The FS ships generally didn’t have radar and ship masters became versatile in reading the weather and in looking for coves to take cover when the waves became rough for comfort and safety. The FS ships were known for rolling in heavy seas and being slow it cannot outrun a coming typhoon. Many were caught in the seas by storms and foundered or were wrecked.

The FS ships served longer than they were intended or expected to. Most were still sailing in the 1970’s and having completed three decades of service. But by the 1980’s, only the sturdiest of the class survived. A few of the FS ships served until the early 1990’s. It is a matter of conjecture which was the last FS ship sailing in our waters. That FS ship was probably a vessel running cargo somewhere among the lesser-known routes.

Usually death of the engine is the main cause of the retirement of the FS ship. Others were retired because they were no longer competitive in terms of speed and comfort. Many long-surviving shipping companies sold and broke up FS ships late in its life to be able to buy newer replacement ships. However, other lesser companies sold and broke up ships in the economic crisis of the mid-1980’s and went out of the shipping business.

As a whole, the FS ships did not suffer from leaky bottoms or holed hulls. In general, they proved to be sturdy and reliable. The FS ships were one of the most significant types of ships to serve Philippine shipping.

The Passenger-Cargo FS Ships in the Philippines:

[Edited and reprinted from an article in the old Philippine Ship Spotters Society website.]

To help PSSS support its projects and developments for its upcoming contents.