Mr. Jun Marquez, who hails from Sydney, Australia and Baybay, Leyte is the great donor of Philippine Ship Spotters Society (PSSS) and I consider it an honor and privilege to have known this kind and great guy and enjoy his friendship. So when he indicated in 2013 that he wants to see me in his hometown in the summer of 2014 I made preparations for that and I waited.

The occasion he was going home was a family affair and he said he wants me to meet his family. And so we made arrangements and our rendezvous will be Benit port in San Ricardo, Southern Leyte. It puzzled me a little a little because Benit is somewhat far from Baybay and I can go by bus to Baybay via the Mahaplag Junction (wrongly called by almost everybody as “crossing”) which is just near their hometown.

Even with experience in travelling and with attempts at verification, I still make mistakes especially with the shifting schedules of summer, the peak season. I planned to take the 6PM Super Five bus for Manila from Davao Ecoland bus terminal so that I will arrive for the 6AM or 8AM Montenegro Lines ferry in Lipata port of Surigao City for Benit port. But the damned Super Five bus (this isn’t the Iligan bus but the Bohol bus) wouldn’t take passengers for Lipata only as it was peak season and I am not willing to pay the full fare to Pasay (why, are they lucky?). 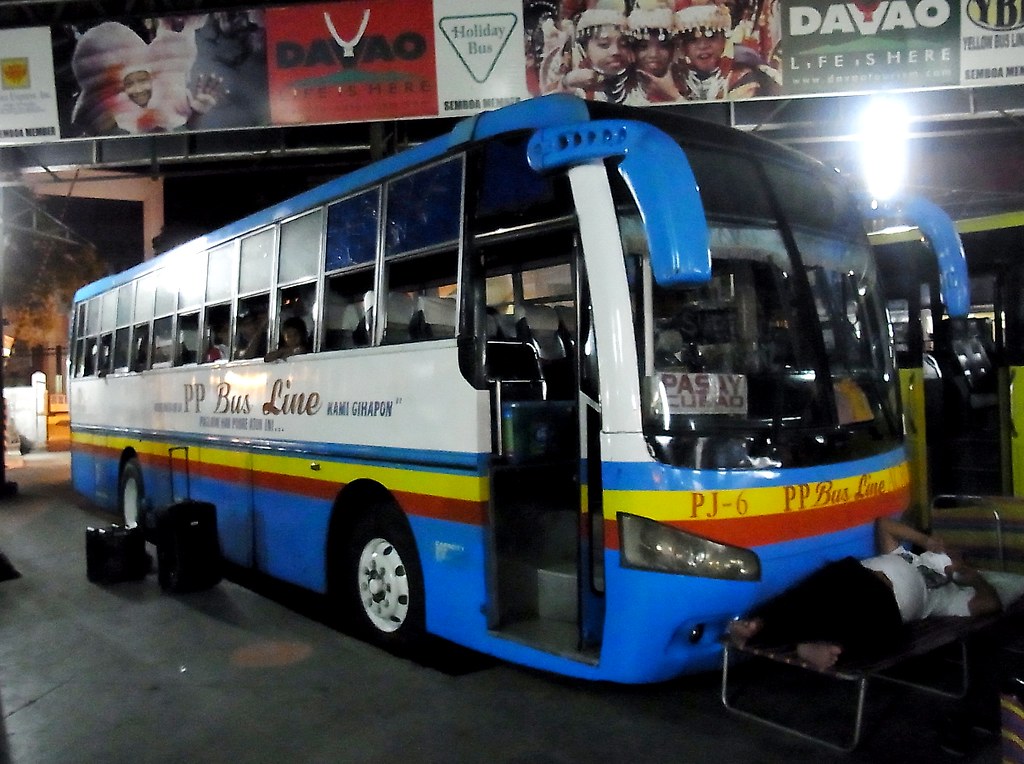 I took the next bus for Manila, the PP Bus. It was due to depart at 9PM. I asked the driver if there is a chance we will be able to catch a 6AM or 8AM ferry to Benit. It was actually my subtle way of pressuring him. He looked a little puzzled and said “Sorry, no, they are not going fast as they take the 11AM ferry for Liloan”, same as the Super Five bus which refused me. And he told me there is no 8AM ferry for Benit as the sked is 10AM. I was not really interested in the Liloan ferry as my destination was Benit. I simply want to reach Lipata port by bus and from there look for a ferry to Benit and I just hoped there is an early morning departure.

With a sigh of resignation I thought if I shall try the Bachelor bus. But that is a slow bus and even more expensive. And as a matter of principle I don’t ride them if there is an alternative because I don’t like buses which shortchange passengers and which is the most expensive. Philosophically, I also don’t like monopolists so I shun them whenever possible. The Bachelor bus to Leyte is one ride I don’t recommend for those who ask me for advice since it is too slow. The running speed is not high, they pass by many terminals and they take too long (make “tambay”) in some big terminals. They are anything but an express bus.

Our PP Bus left at 9PM and with no compulsion to drive fast and with our drivers showing obvious tiredness and lack of sleep. We reached Lipata port after a 12-hour drive (long for a 407-kilometer route). I have to walk part of the way in Lipata road as our bus stopped by the eatery for a late breakfast and there is a long vehicles queue outside the port gates. The Super Five bus that left ahead of us was just several places ahead of our bus in the vehicles queue. So, I did not lose much except for the lack of comfort of the PP Bus because it was an ordinary bus. 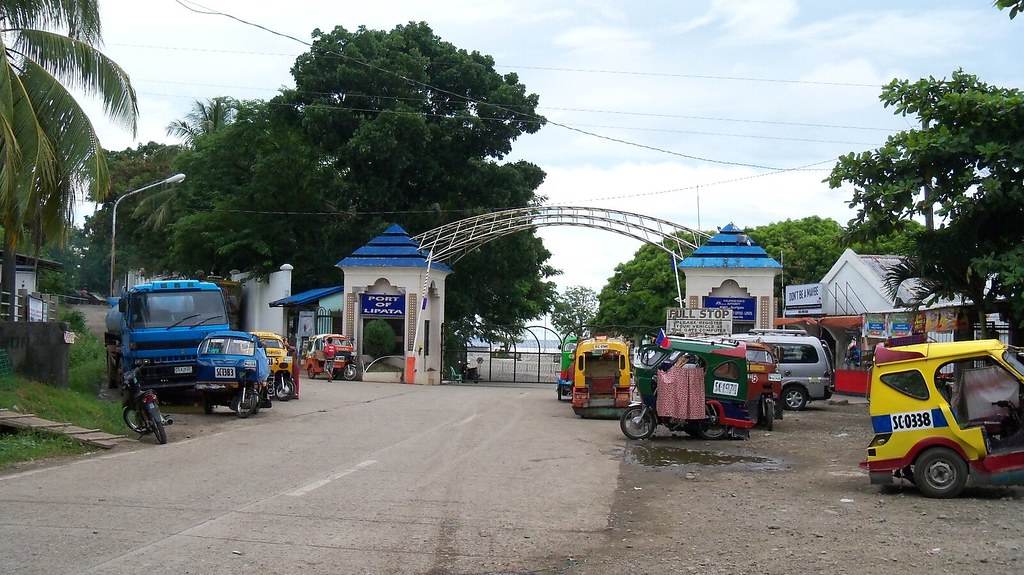 I inquired at the ticketing office just outside the gates. The Montenegro ferry was not leaving at 10AM but at 11AM. That means a 12NN arrival in Benit and so I advised Jun. He was already there waiting in Benit port. I was worried about him doing nothing in the port but I found out later he had with him a colleague from Australia. I also thought maybe I should have taken the mid-afternoon Bachelor bus from Davao. As they say, “saying ng oras” (it was wasted time since if I arrived earlier we should already be on the move and touring).

We were made to wait at the waiting area (or more exactly a holding area for “cattle” as the passengers were treated like that). It was full as the passengers waiting are for two ferries, the other for the Maharlika Dos that sank a few months later. It was hot and I was fuming because P10 was added to the terminal fee and there was nothing to show for that increase. At that amount they are charging, in Cebu port there will already be airconditioning in the terminal and a free bus ride. I thought Lipata port is making a killing with that and more so with the mandatory weighing of the vehicles (which is of no use anyway). 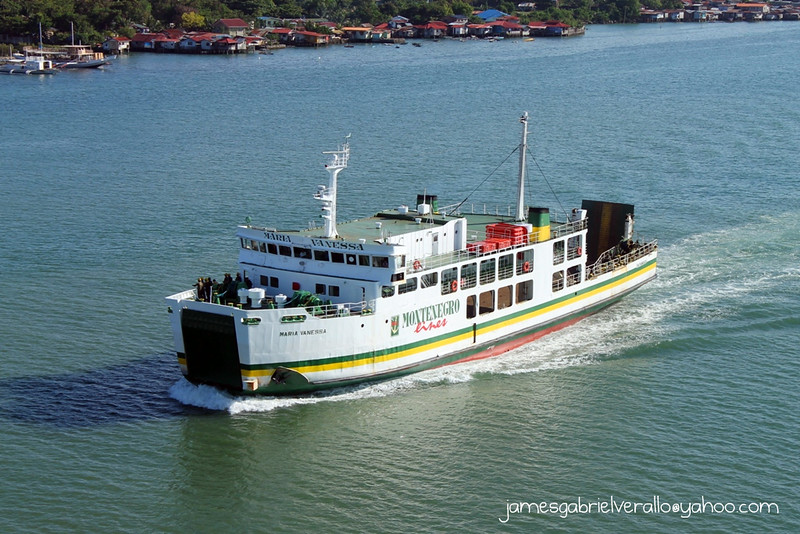 We finally boarded just before 11AM as our ferry, the MV Maria Vanessa of Montenegro Lines gave priority to boarding vehicles. Well, that is the problem with having no separate passenger ramps and maybe that is also a tactic so they won’t have to turn on early the weak airconditioner. This was my second time aboard MV Maria Vanessa. I just bought an Economy ticket because it is difficult to justify the P140 versus P210 difference in fare for Tourist with the weak aircon and anyway the voyage is not more than an hour. I can buy food and drink with the difference.

The MV Maria Vanessa is big and fast for a short-distance ferry. But the Montenegro Lines policy is not to add scantlings hence passenger space is limited and this creates a problem because they load buses and buses have many passengers. That is the reason why they have the peculiar “Stairs Class” – one pays Economy but sits at the stairs because there is nowhere else to sit. Their Economy is hot when the sun is up and hard to use when raining as the seats extend to the side and the passageway is near the bulkhead. The seats extend too up to the stairs going to the weather deck and that is becomes a passageway for rain. I thought that whoever was the naval architect who refitted the ship is dumb and Montenegro Lines is only interested in the revenues but not at the welfare of the passengers. 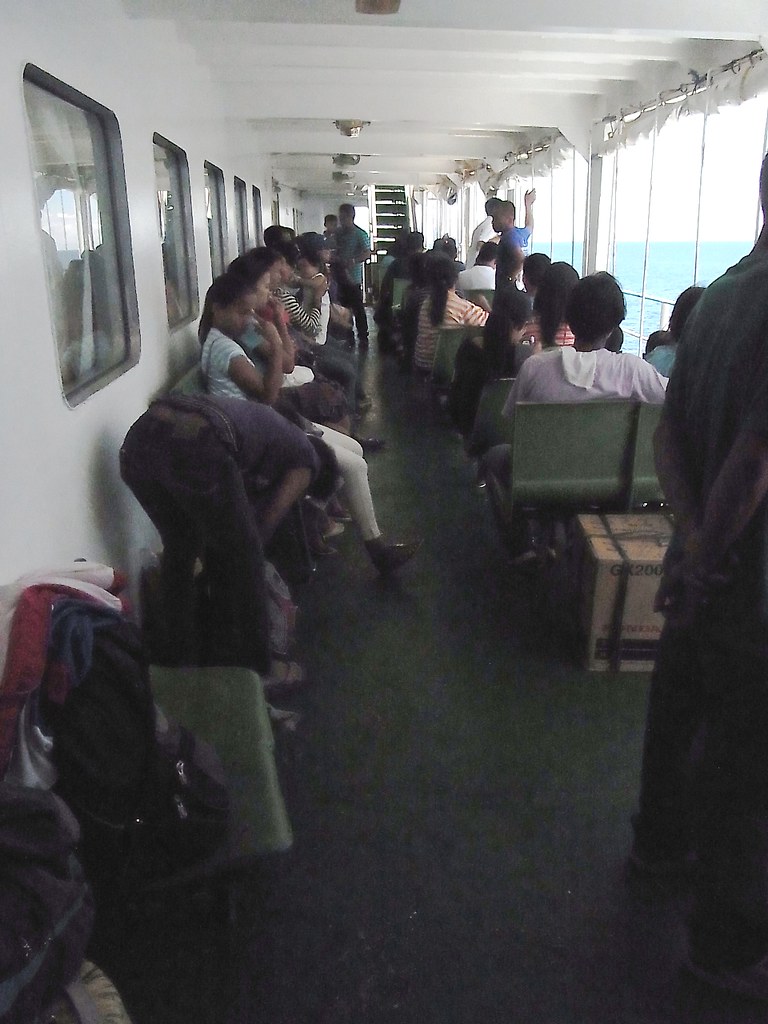 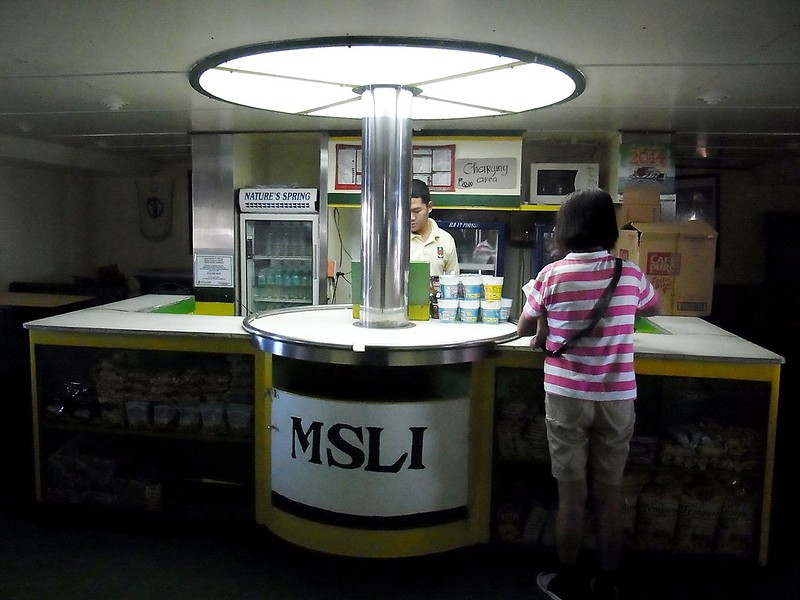 I was hungry as I have had no breakfast (no, I did not bother for the breakfast stop just outside Lipata gate while the bus was on queue). But as usual for most Montenegro ferries the canteen the cupboard is almost bare. They just have some biscuits, some instant noodles (which I have no taste for), candies, coffee, water and one kind of overpriced drink. It’s really difficult for passengers if those that run the canteens are “taga-masahe ng bakal” (“masseurs of metal”) rather than graduates of hospitality courses. It would have been better if they shall just hand over the canteen to a good operator of a “pondahan” (a good store keeper or canteen operator).

The MV Maria Vanessa is a good, capable ship but it is primarily a vehicle carrier with passenger service just an afterthought or it is simply non-existent. Like the passenger terminal I passed through the ship as run is similar to a cattle carrier. And for a 12-nautical mile crossing with almost no amenity, the P140 Economy ticket converts to nearly P12 per nautical mile. That is way above the rates of the Cebu-Leyte ferries that just charge P300-400 for a 50 to 60-nautical mile crossing and which offers bunks, better amenities and more space. Until now, I can’t understand the incongruency of MARINA-approved rates. They don’t have a common metrics for all unlike in land transport. This is a system rife for corruption. 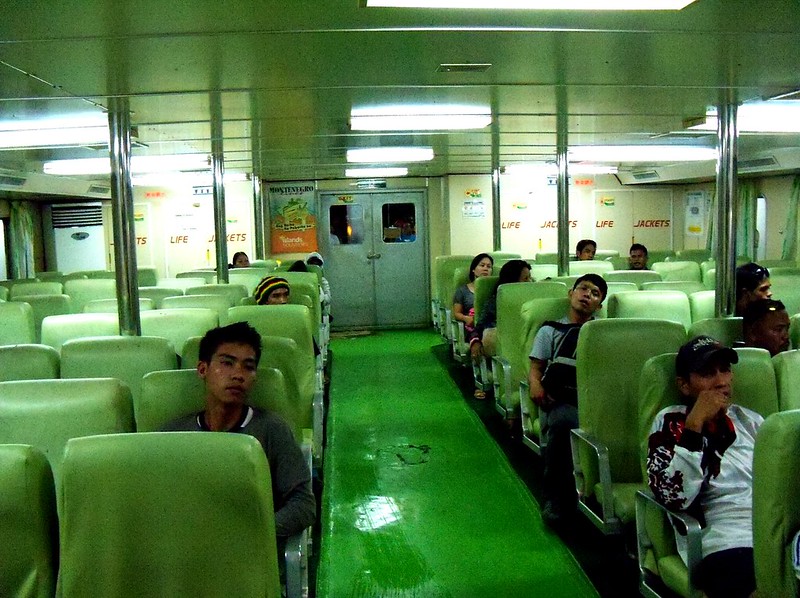 In MV Maria Vanessa, the Tourist which occupies the original passenger compartment in Japan occupies half of the passenger area. Yet, few take Tourist class because of the high fare differential. Meanwhile, the Economy is crowded. Another passenger deck could have been built in the weather deck but Montenegro, I noticed, is too cheapskate for that and they do not want the resultant increase in Gross Tonnage (GT) that will mean additional docking and registration charges.

While in Lipata port I was busy taking photos. Ditto aboard MV Maria Vanessa and in Benit port where we arrived exactly noontime. Jun was waiting with a pick-up truck but I didn’t know there was a surprise for me. Before boarding he introduced me to Mayor Rusty Estrella of the next town of Pintuyan. We had an invitation for lunch at his house and we had a topic to discuss – the feasibility of a short-distance ferry port in Pintuyan to compete with Benit port and to aid in the economic development of Pintuyan. The meeting was set up by Jun’s colleague, I found out. 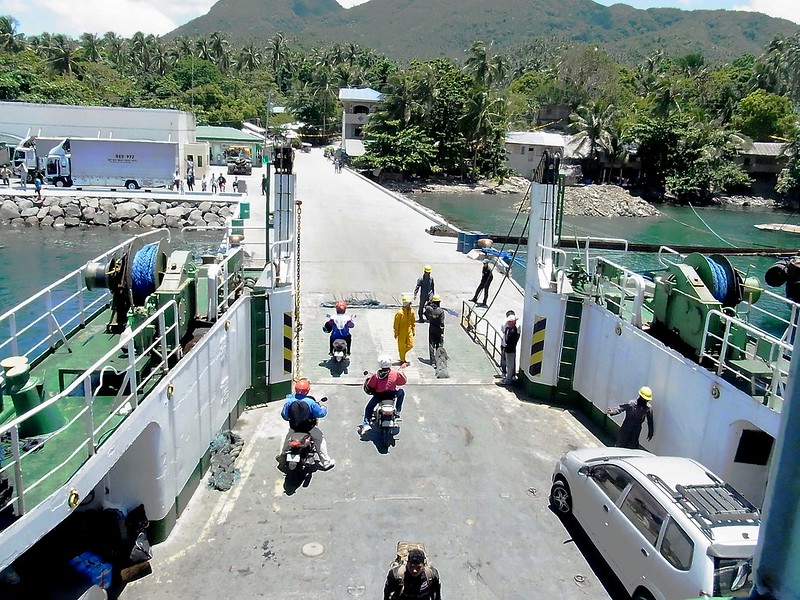 After a sumptuous lunch where I was able to rehydrate, we talked port and route feasibilities and the BALWHARTECO experience in Allen which was a cutting-edge in port service. I also asked about the old Pintuyan port and I learned a little about the history (it once hosted motor boats to Cebu and Go Thong ships loaded copra when copra was still a great commodity crop). And as I thought before, the surf in Pintuyan is really strong during “habagat” (the southwest monsoon) which is a problem for loading and unloading ROROs. We also talked about “The Saddle”, the mountain and its mountain pass road which poses problems for truckers using Benit port and how a port in Pintuyan will obviate the use of that. Truckers have a problem in “The Saddle” because a generation-and-a-half of drivers has no experience anymore in the steep gradients and rules of the road in “Tatlong Eme” in Quezon National Park.

We also talked about how incentives could make the port successful and how can they attract investors to build a RORO port. Ancillary issues like lack of hassles and illegal exactions like what is being applied illegally by the San Ricardo and Liloan LGUs were also discussed. Mayor Rusty Estrella confirmed there was a memorandum from the Department of Interior and Local Government (DILG) banning the illegal collection of local government units (LGUs) in the ports and that in fact the mayors of Leyte and Biliran islands were called to a Tacloban City meeting to emphasize that (but to no effect, apparently, as the lure of money and greed are simply too much for the mayors and the municipal councils).

I promised Mayor Rusty Estrella what I can do and that we should continue to exchange notes. I thought his idea was worth supporting since a Mayor should really look for economic investments so his town will progress. There was an invitation too for Philippine Ship Spotters Society (PSSS) for a visit to his town. My call to Mayor Rusty Estrella with Jun Marquez was an eye-opener for me, too. I passed by Pintuyan many times already but I thought she was much smaller than she actually is and it is not so. It turns out the Poblacion of the town is not by the highway. [Note: I have lost contact with Mayor Rusty Estrella and he has not followed up.]

By 3PM, me and Jun were ready to roll. I thought it would just be to Baybay City but I was wrong. It would be much farther than that….

[This is Part 1 of my shipspotting trip with Jun Marquez which was a great trip. Part 2, the better part will follow.]